The Islamic State: Medyan Dairieh scooped the world with his inside report on the Islamic State, the fruit of three weeks spent embedded with the group in Syria and Iraq. A notable coup for Vice News, the youth-oriented news service increasingly challenging the methods of the mainstream media companies. Originally released in five parts, linked here to the full forty-minute report (with some disturbing scenes, please note).

Print is down, and now out: David Carr's piece for the New York Times on how media companies are spinning off newpapers, which could be an indication of bad things for the medium, has been much discussed all week.

The persistent financial demands of Wall Street have trumped the informational needs of Main Street. For decades, investors wanted newspaper companies to become bigger and diversify, so they bought more newspapers and developed television divisions. Now print is too much of a drag on earnings, so media companies are dividing back up and print is being kicked to the curb.

See also Columbia Journalism Review's The great newspaper spin-off and Roy Greenslade's Will newsprint-only companies really hasten the demise of newspapers? On the other hand, News Corp's Robert Thomson announced ""We remain firm believers in the power of print", adding ""Print is a concentrated, intense reading experience with unique affinity in our digitally distracted age." So who really knows?

The relentless trauma of covering Gaza: Jared Malsin at Columbia Journalism Reviews on how even seasoned war correspondents are feeling the impacts of witnessing continual civilian casualties. 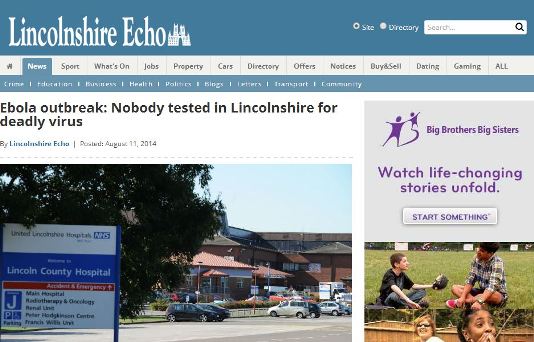 All quiet on the ebola front in Lincolnshire: Quite possibly the news story of the year, brought to the grateful residents of the county by the Lincolnshire Echo and noted by the Media Blog - though China's news agency Xinhua's confident assurance that "There is no evidence that coffee and onions cure Ebola" surely runs it very close.

6 things publishers need to know about UK media consumption, from Ofcom's latest report: They include the bald asertion that newspapers would not be missed by most of us: "just two percent of respondents saying a newspaper would be form of media they would miss the most", notes The Media Briefing.

160,000 newspaper pages added from 1787-1954: They continue to go full steam ahead at the British Newspaper Archive, adding 160,000 pages in July, including the London Evening Standard (for some years in the 1860s, please note), Glasgow’s Daily Record and the Surrey Comet.

African American Newspapers, 1827-1998: A great new digital service just introduced into the British Library's Newsroom is this Readex World Newspaper Archive collection of around 270 US newspapers documenting the African American experience over a century and a half.

Graphic content: How media differ on use of Gaza images: BBC Monitoring shows how news organisations in different countries have approached the use of images about Gaza.

Posted by Luke McKernan at 8:07 AM