Our television and radio news recording service, Broadcast News, has been busy over the past two months recording extra programmes on the Scottish independence referendum. Usually Broadcast News takes in some 60 hours of programmes per day (40 TV, 20 radio) from across 22 channels available via Freeview or Freesat. We record the same programmes at the same times each day, to provide a consistent research service. But when there are news specials, breaking news programmes or major news stories that spill over the schedules, then we record more. 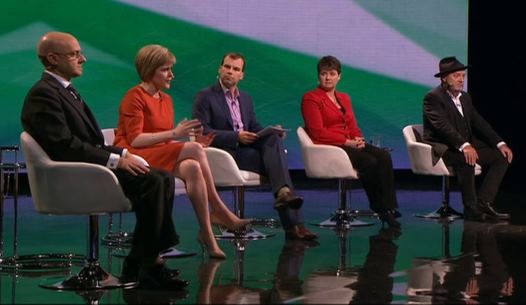 For the Scottish referendum we added recordings from two further channels, BBC One Scotland and STV, for most of August through to the end of September. So, as well as the standard TV and radio news programmes from BBC, ITV, Sky, Channel 4, Al Jazeera, CNN, LBC and others, we recorded BBC one Scotland's Reporting Scotland and Kevin Bridges: Live at the Referendum, STV's STV News at Six and Scotland Tonight, BBC Parliament's Scotland 2014 and Reporting Scotland, special programmes such as the Salmond/Darling dates, referendum broadcasts from the Yes and No campaigns, Radio's 1's Big Conversation: Scotland Decides (16 Sep), STV's Scotland Decides - The Facebook Debate (12 Sep), BBC 1's The Big Big Debate (11 Sep), and several more.

The heaviest extra recording activity was inevitably over 18 September (the day of the referendum) and the the results and aftermath the following day. BBC TV broadcast two through-the-night programmes entitled Scotland Decides: one hosted by Hugh Edwards for BBC1 and one for BBC Scotland hosted by Glenn Campbell. Bernard Ponsonby and Aasmah Mir hosted ITV/STV's coverage, also named Scotland Decides. Sky News went with Decision Time Scotland, hosted by Adam Boulton, Kay Burley and Niall Paterson. For radio, BBC Radio 4 went through the night with Scotland Decides, hosted by James Naughtie and Rachel Burden, while BBC World Service had a special edition of its The Newsroom programme.

Not watched by so many people in the UK, but fascinating for their different perspectives, were the special programmes produced by France 24, RT (Russia Today) and CNN, the latter two broadcasting coverage throughout the night and early morning, evidence of the huge interest the referendum generated worldwide. Steering clear of value judgments, it was nevertheless most intriguing to see how international opinion ranged from disbelief that Scotland would ever consider breaking away from the United Kingdom, to incredulity that it would ever consider not doing so having been given the opportunity. They are among the most interesting programmes from referendum night, and likely to be of particular value to future researchers.

The result itself brought about a mixture of triumph, disappointment, and even a sense of anticlimax, as we know. Sally Magnusson hosted BBC One Scotland programmes which analysed the results overthe morning and afternoon of September 19th, STV had John MacKay and Andrea Brymer hosting Scotland This Morning: How the Nation Voted. And then gradually the dust settled, the story dropped from the news agenda, and we returned to the regular round of news recordings, carrying on with our BBC One Scotland and STV recordings to the end of September. Now normality reigns, until the next drama unfolds.

All of the Scottish referendum programmes that we recorded are available to view (or listen to) at the British Library's St Pancras and Boston Spa sites via the instant access Broadcast News service.

Posted by Luke McKernan at 3:45 PM