Two recent news stories from the world of news have given indication of how time may eventually run out for print newspapers. On the other hand, strong arguments have also been made recently for the sturdy nature of the medium, which suggest that the British Library will be continuing to collect newpapers for a good while yet.

Collectively the two organisations - which were already sharing the same offices - now represent the national, regional and local newspapers of the UK, and exist to promote the interest of what the NMA describes as "£6 billion sector read by 42 million adults every month in print and online". But the NMA's strapline is "the voice of national, regional and local newsbrands", and that's the heart of the matter. Their business is news, and newspapers are merely one means to that end. Most of our newsbrands originate in newspaper titles, but The Guardian, The Times and the Mail are no longer newspapers - they are news publishing hubs, distributing news through multiple channels, digital and print. 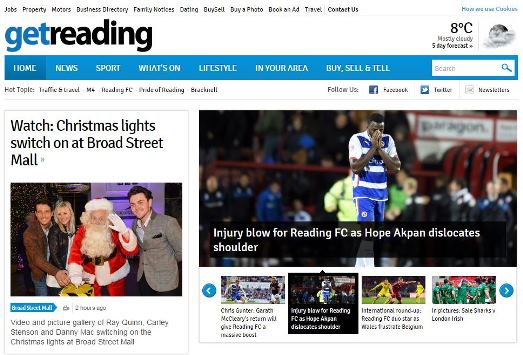 Print newspapers have remained powerful even in an encroaching digital world in large part because they attract the greater part of the advertising market. But news from publishers Trinity Mirror last week indicates that change is on its way. Tales of regional papers closing or dailies converting into weeklies have been common over the past few years, but Trinity Mirror's closure of seven regional print titles - The Reading Post (a former daily title), its free sister title GetReading, Wokingham Times, Bracknell Times, Surrey Herald, Woking Informer and Harrow Observer - is particularly dramatic. It will replace these with the GetReading website in what they are calling "a bold, digital only approach", driven by an increased digital market penetration in the area, with the number of unique users of the GetReading site having grown over the past year by 68%. Fifty posts will be lost, with twelve new ones created in the fields of digital editorial and digital commercial.

This could be the tipping point - where anticipated digital exposure starts to outweigh the lingering advantages of staying with print. Of course it is not a like-for-like transfer from print world to digital world, and has been greeted with dismay by champions of regional journalism as we have known it. But it indicates a greater certainly from some of those in the newspaper publishing business as to where they feel confident about going next. It indicates how groups of titles linked together by a common website may be more likely to disappear rather than the individual titles that we have seen so far. Some think it could be the end of local newspapers as we have known them.

But others see strong signs that the print newspaper may yet survive for a good while yet, or at least some print newspapers will. Tien Tzuo, founder and chief-executive of business management software company Zuora, wrote a defiant piece recently, reproduced by The Guardian, 'Let’s get over the whole 'newspapers are dying' thing'. he writes:

There are two prevailing narratives in print-to-digital media right now: the unstoppable VC-fuelled ascent of digital publishers like BuzzFeed and the inevitable decline of ink-stained legacy publishers like the New York Times. Both stories are wrong.

They also conflate content with form. Newspapers are intellectual assets, not physical ones. Their core product consists of making smart editorial decisions and publishing sharp voices. Whether you choose to read those voices on a phone or on a broadsheet makes no difference.

Tien Tzuo's confidence in the 'creative entrepreneurialism' of some of the UK's national newspapers (or companies "formerly known as newspapers" shows how a strong business model for print newspapers still exists. But it seems to be a national newspaper model, not necessarily one for regional titles, which must be more likely to contract and end up sharing centralised, digital newsrooms with web platforms. Digital first will inexorably turn into digital only.

It's a news media world now, and at the British Library we need to be alert to these changes as we work to archive the UK's published news as comprehensively as we can. The chances are that there will be far fewer print titles over the next few years, but that some strong newspapers will survive, as part of a multi-format news publishing strategy on the part of their owners. We archive both newspapers in print and newspaper websites, and if one of the former disappears we will be collecting its web successor. In whatever forms news is published, we should be ready for it.

Posted by Luke McKernan at 3:54 PM