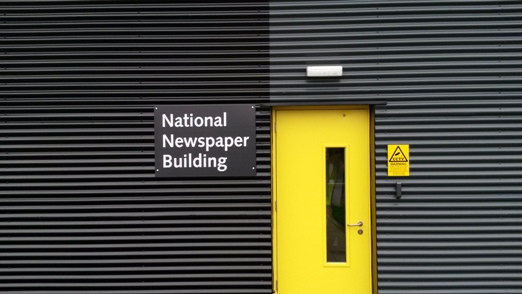 On Friday 23 January 2015 the British Library formally opened the National Newspaper Building at Boston Spa, Yorkshire. The building has been operational for a few months now, but it feels right to mark these things with a celebration, and the ceremony that took place effectively brings to an end our Newspaper Programme, which had the task of transferring the newspaper and periodical collection from its home in Colindale, north London, to the British Library's second home in Boston Spa, to a dedicated preservation building. The entire programme cost some £33m (of which the new building cost £23m), with  two new reading rooms (in London and Boston Spa) thrown in, plus it instituted a newspaper digitisation project which has resulted in the British Newspaper Archive. All in all, the future of the British Library's newspaper collection has been transformed. 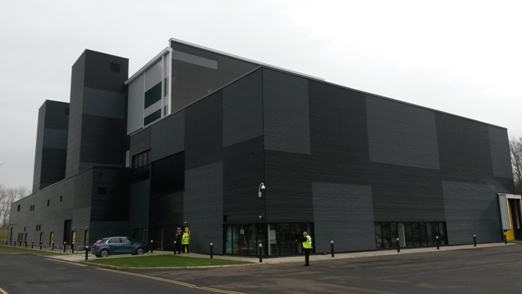 The building is located in Boston Spa, near Wetherby in Yorkshire. It stores around 33km of newspapers, some 60 million issues in 280,000 bound volumes, or 450 million individual pages (give or take a few). They are stored in a dark, air-tight, low-oxygen environment to eliminate the risk of fire (14-15% oxygen makes it similar to trying to breathe at the top of a Himalayan mountain). The newspaper are stored on 20-metre high stacks and retrieved by robotic cranes, which move the requested volumes via an airlock to a retrieval staff, where staff prcoess them for sending to the reading rooms at Boston Spa and St Pancras in London (it takes a maximum 48 hours from the point of ordering for the newspapers to arrive on the reader's desk). Inside the 'void' area of the National Newspaper Building

For the opening ceremony they raised the oxygen levels to enable visitors to go beyond the retrieval area and enter the storage void. You stand on a low-level viewing platform and look up in awe as tier upon tier of newspapers rise up into the distance, while the robotic crans whirr by picking up stacks (they select stacks of several volumes rather than individual volumes of newspapers). 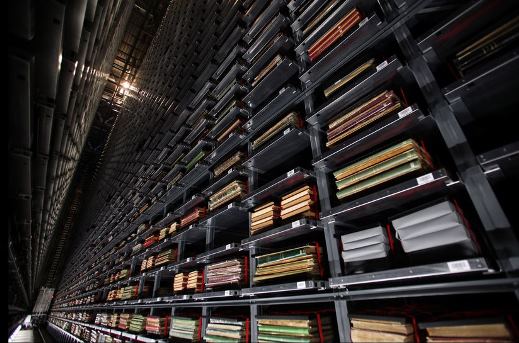 The void is 24 metres high by 24 metres wide by 64 metres long, with 26,000 locations capable of holding 89,000 stacks. As said, oxygen levels are usually at 14-15% (normal atmospheric level is 21%), temperature is a constant 14 degress Celsius and humidity is at 55%, and without the fluctuations in those figures which played havoc with some of the newspapers at Colindale. 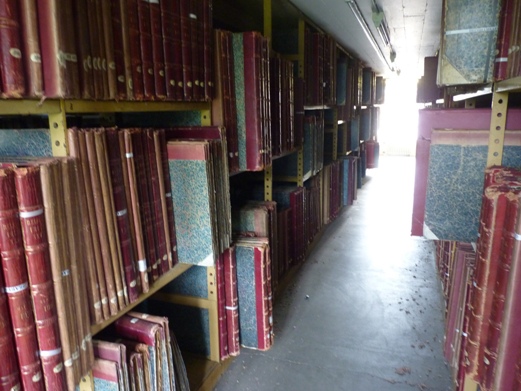 How the British Library's newspapers were previously stored, at Colindale

The reason we had to build the new store was because the newspapers' former home at Colindale was unsuitable for the preservation of newspapers. A study showed that some 33% of the newspaper collection was in a poor or unfit condition, exacerbated by a lack of appropriate temperature and humidity controls. Newsprint was designed to last a day, not in an archive for all time, and to ensure the collection's long-term survival a new home had to be found. Another improvement can be judged from the above photograph showing how newspapers were previously stored at Colindale - standing upright, which placed great pressure on their spines. They are rested horizontally in the National Newspaper Building. The building was formally opened up Councillor David Congreve, the Lord Mayor of Leeds, and Alec Shelbrooke MP (Elmet and Rothwell). After speeches had been given, a plaque unveiled, and visits paid to the void, wecrossed to the new reading room at Boston Spa. This is a reading room for all kinds of subjects and media, not just newspapers, but one corner is specially devoted to newspapers. The reproductions of historic newspapers on the walls will look familiar to any user of the British Library's Newsroom at St Pancras, while the desks will be familiar to anyone who researched previously at Colindale. We have retained four of those desks, with their distinctive overhead lights, but the rest of the reading room is equipped with desks more in keeping with the twnety-first century rather than the nineteenth.

Many historic newspapers might have been lost had they been allowed to continue to fade and crumble as was increasingly the case at Colindale. Today 300 years of the UK's newspaper inheritance are stored in conditions designed to ensure that they will defy the ravages of time. But the National Newspaper Building is not a static monument to a medium that is no more. We continue to take in around 1,200 new newspaper titles per week, despite the rise in electronic news media. Print is not dead yet, and in whatever form the news is published in this country we're ready for it, and will ensure that it is stored safely and made available for researchers, today and forever.

Posted by Luke McKernan at 8:24 AM