The UK General Election means that we have been busy with the video recorders. As well as our regular intake on newspapers and the special web archive collection being built up by the British Library and other legal deposit libraries, we have been recording many extra television programmes relating to the General Election for our Broadcast News service. In our multimedia, multiformat, mobile-driven world, television is still the medium which leads the news agenda in the UK and serves as the focal point for debate.

Here's a run-down of what we're recording, all of which is available soon after broadcast on Broadcast News, available in our Reading Rooms at St Pancras and Boston Spa. 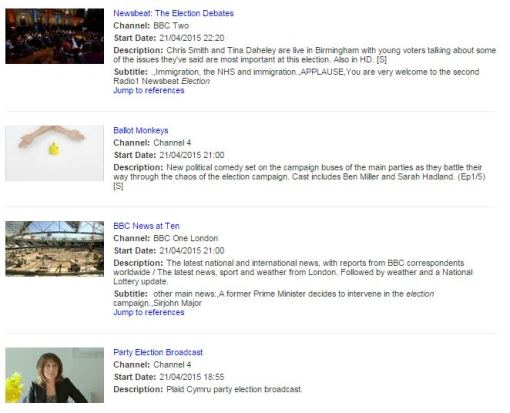 We record selected television and radio news programmes from 22 channels on a regular basis, and so pick up on all the main news reporting on the election - from BBC1, BBC2, BBC4, ITV1, Channel 4 and Sky News, as well as the somewhat less intense election reporting from Al Jazeera English, CNN, RT, France 24 and others. 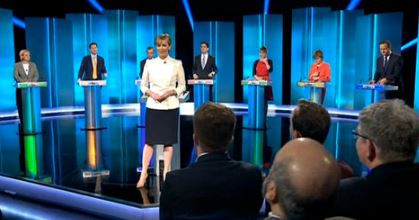 The will-they, won't they arguments over the live debates with party leaders dominated media discussions in the run-up to the formal launch of the General Election period. There was no repeat of the three-way leader debates that so riveted the nation back in 2010, but the compromise solution for 2015 generated variety, much interest and plenty of online debate. We have had Cameron & Miliband: The Battle for No 10 (Channel 4 tx. 26/3/2015), with Jeremy Paxman grilling David Cameron and Ed Miliband and Kay Burley fielding questions from a studio audience; the ITV Leaders' Debate, with Julie Etchingham hosting a memorable seven-way debate between the leaders at their podiums (ITV tx. 2/4/2015); and the BBC Election Debate (BBC1 tx. 16/4/2015), hosted by David Dimbley, featuring the leaders of the five main opposition parties. We have also recorded Scotland Debates (STV tx. 7/4/2015) and the Leaders' Debate - Scotland (BBC1 Scotland tx. 8/4/2015), the Newsbeat Debates on TV and Radio 1, the Daily Politics Debates, and several others. 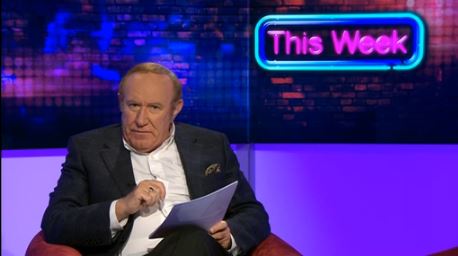 Accompanying the news, we of course have the discussion programmes. Analysing it all have been the Daily Politics, Sunday Politics and This Week (all hosted by Andrew Neil), Election Tonight, Question Time, the Andrew Marr Show, The Agenda, Murnaghan, Newsnight, and even the Election Late Show.

The number of interviews with the party leaders seems prodigious. ITV has had its Spotlight interview series with Tom Bradbury, BBC1 had has the Leader Interviews with Evan Davies, there have been the Newsbeat Interviews on BBC TV and radio, numerous interviews on general news and current affairs programmes, and ad hoc pieces to camera being picked up by BBC Parliament.

The BBC Parliament channel has thrown open its schedules to capture many of the interviews, reactions, manifesto launches and campaign events of which we only see highlights in the main news programmes. So, for example, the manifesto launches include those of the Conservatives, Labour and Liberal Democrats, Scottish National Party, Ulster Unionist Party, Alliance Party, SDLP, Green Party, UKIP, Democratic Unionist Party and the Christian People's Alliance, as well as the Scottish and Welsh branches of Conservatives, Labour, Liberal Democrats, Greens and UKIP, and assorted youth manifestos. 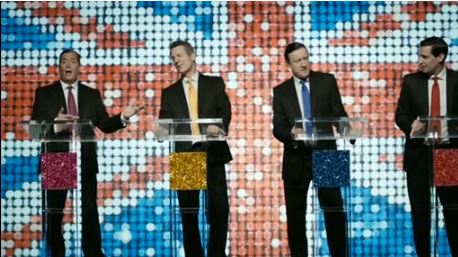 Party election broadcasts are a television staple, and for this election it is noticeable how stylishly made most of the broadcasts are, aiming as they are to attract not just television viewers but an online audience intent or liking or disliking the same videos on YouTube. So far we have broadcasts from the Conservative Party, Green Party, Labour Party, Liberal Democrats, Plaid Cymru, Scottish National Party, the Trade Unionist and Socialist Coalition, and UKIP.

All party election broadcasts shown on the BBC are currently available via iPlayer. 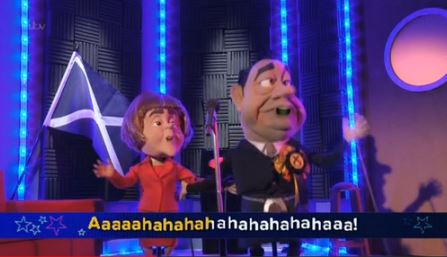 We are also recording the many news satire programmes that are popping up: Have I Got News For You, ITV's new puppet show Newzoids, Channel 4's The Last Leg, which has a special focus on the election, and programmes created for the election period itself: Jack Dee's Election Help Desk and Charlie Brooker's Election Wipe on BBC2, Ballot Monkeys on Channel 4 with its up-to-the-minute gags, and the planned post- election programmes including Election Autopsy (with Frankie Boyle) and Rory Bremner's Election Report.

We will be producing a special collection page for the election recordings on Broadcast News, once the election is over.

Posted by Luke McKernan at 1:51 PM