Did you know that the historic back runs of most of the British national newspapers that are published today have been digitised by online publishers and that these are all available for free in British Library Reading Rooms? With the recent addition of the Daily Telegraph, Sunday Telegraph,  Independent and Independent on Sunday to the digital archives you can search at the British Library, it’s a good opportunity to review what’s available for all current British nationals. 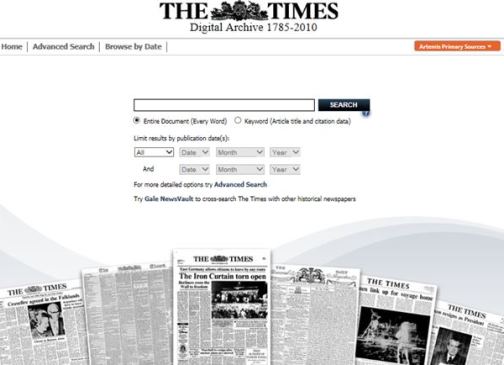 The Times was the first national newspaper to digitise its historic back run and The Times Digital Archive has been available in British Library Reading Rooms since 2003. This is a vast archive which allows users to search every page of the newspaper from its first issue in 1785 (when it was known as the Daily Universal Register) up to 2010.

The archive offers access to a 225 year back run of The Times and contains, in total, over 70,000 issues which include over 1.6 million pages or more than 11.8 million articles. The entire file is searchable by keyword and by date and the content can be viewed at page or article level. In addition there is an advanced search facility which enables a search to be focussed on particular parts of the newspaper  such as ‘News’ or ‘Reviews’ or ‘Politics’.

In the years since 2003, when The Times Digital Archive first became available, back runs of most of the other currently published British national newspapers have been digitised and these are all available in British Library Reading Rooms. The titles are:

Links to all of these can be via our Electronic Resources page (select Newspapers as a subject, then refine your search by Full Text). Please note that electronic access only works in British Library Reading Rooms and on our terminals.

Although the historic back runs of most of the British national newspapers that are published today have been digitised and made available online, not every current British national is available in this way. The following titles do not yet have digital archives: 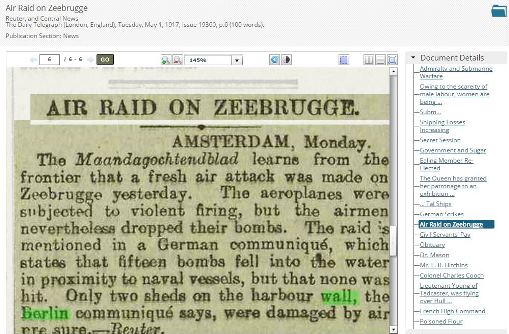 The most recent additions to the list of digitised archives of British national newspapers are The Daily Telegraph, Sunday Telegraph, Independent and Independent on Sunday. These titles have only been available on our Reading Rooms since earlier this year.

The Telegraph Historical Archive contains over 1 million facsimile pages of The Daily Telegraph from the first issue published in 1855 to the year 2000 and the Sunday Telegraph from its inception in 1961 up to 2012. 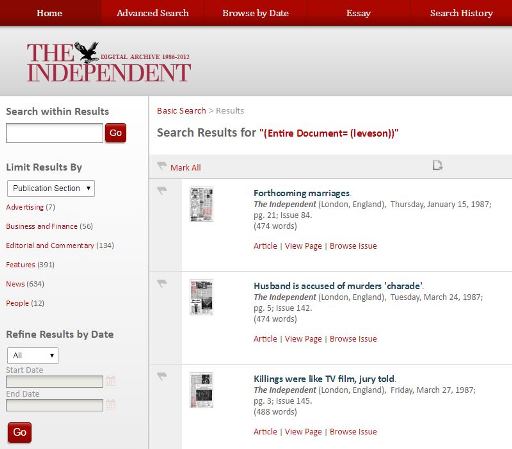 In some cases it is possible to carry out a combined search of more than one historic newspaper archive which can increase the efficiency of the search process and deliver a wider range of results from different types of newspaper.  The historic archives of The Times, Sunday Times, Daily Mail, Financial Times, Independent and Independent on Sunday are all hosted by the same on-line publisher (Gale Cengage) and these archives can be searched individually or in a combination of two or more titles. Similarly, the historic archives of the Daily Express, Daily Mirror, Daily Star, Sunday Express and Star on Sunday are hosted by another on-line publisher (UKpressonline), and the archives of The Guardian and The Scotsman (along with the Irish Times) are hosted by ProQuest Historical Newspapers. It is possible to combine a search of two or more newspapers within these groups of titles as well.

Digital newspaper archives have transformed the use of historic newspapers in research. Whereas in the past it might have taken days, weeks or even months to search through large bound volumes of newspapers or to trawl through endless reels of microfilm to find all the information needed for a particular research topic, in a digital archive the information is much more easily accessible and can often be found in almost no time at all.