Today's news may not always be happy, but it is often beautiful to look at. A new book, Visual Storytelling: Infographic Design in News, by Lu Yikun and Dong Zhao, shows how the rise in data journalism and reusable data sources has led to an explosion in infographics and data visualisations. These have been created by a skillful set of designers who can turn raw data into eye-catching illustrations that make better sense of the world while delighting the eye. The book provides a background to the different types of data journalism design - pie charts, bar charts, radar charts, word clouds, 3D graphs, real-time maps and heat maps - and gives some of the history of the form. Mostly it is given over to sumptuous examples of news infographics produced by designers across the world. The index of artists at the back of the book provides web addresses, from which you can  discover the extraordinary array of work being done by what is, in effect, a new branch of professional journalism. Here are some examples (all of them illustrated in the book). 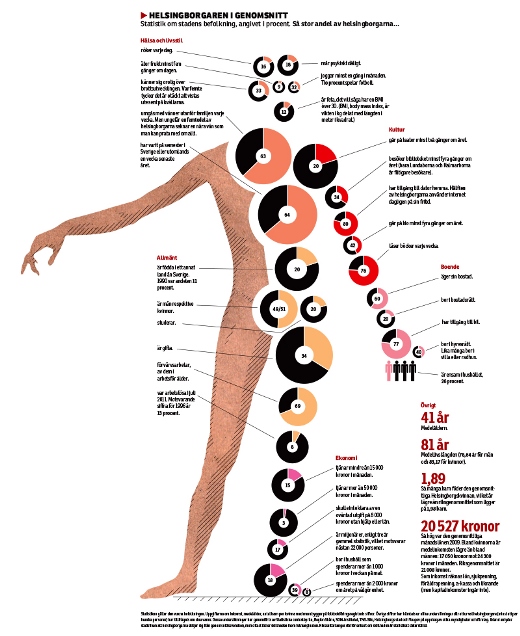 Erik Nylund, 'The Average Resident in Helsingborg'. Reproduced with permission.

Erik Nylund is an infographics designer and illustrator, from Malmö, Sweden. His infographic, 'The Average Resident in Helsingborg', produced for Swedish newspaper Helsingsborgs Dagblad, takes data about the residents of Helsingborg and appositely presents the numbers as part of the anatomy of the resident (even down to one of four fingers conveniently expressing a figure of 26%). 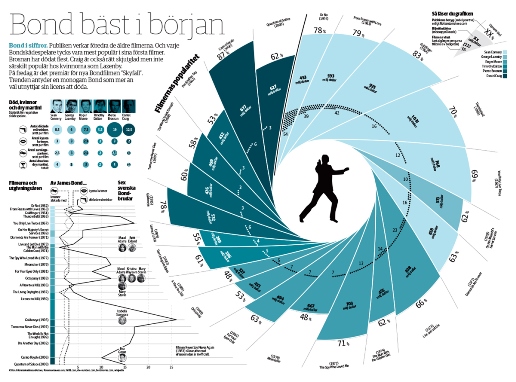 Nylund produced this infographic in response to a competition from the www.informationisbeautiful.net website, which provided data about James Bond movies and invited designers to express it creatively. It was published by the Swedish newspaper Sydsvenska Dagblade in 2012. 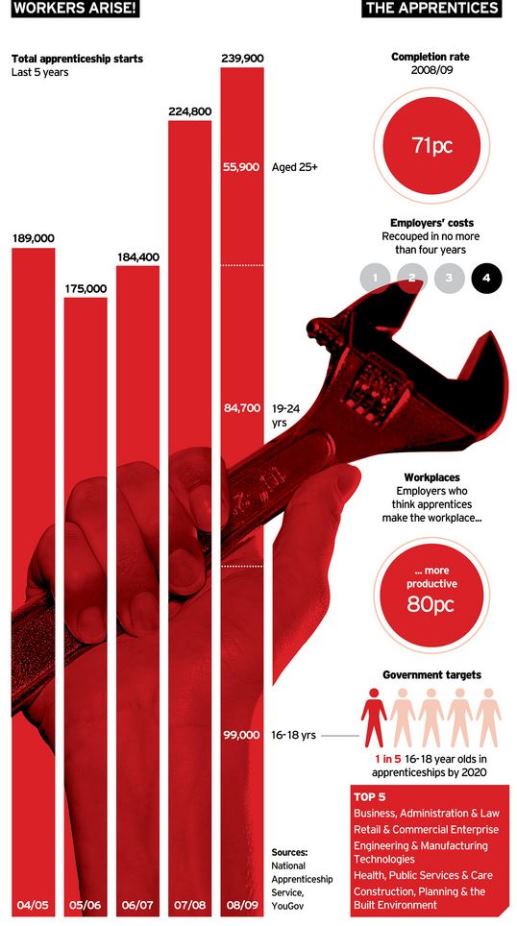 Ciaran Hughes is a Irish artist and designer, who has produced infographics for many newspapers, public and commercial sector clients. His 'Workers Arise!' was a front page graphic for the Daily Telegraph that accompanied an article on apprentices in the workplace. Its inspiration was the work of the great Russian graphic designer Alexander Rodchenko, and it makes powerful, symbolic use of the red bars and the worker's hand gripping a wrench - a model example of the coming together of theme and form. 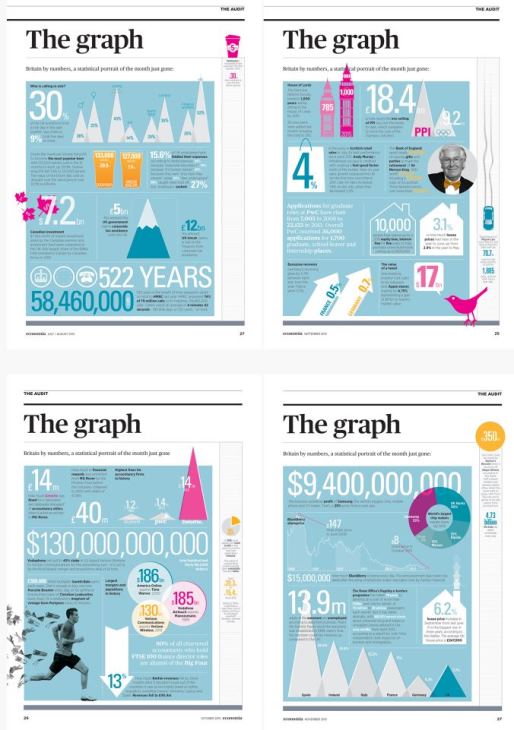 Henrik Petterson, images from his series 'The Graph'. Reproduced with permission.

Henrik Petterson producers a regular infographic series for economia magazine, entitled 'The Graph'. Subtitled 'Britain in numbers: a statistical portrait of the month just gone', it illustrates not only how news information can be dynamically visualised, but shows by its regularity how it can function as a news service.

If you are interested to see more of the work of news infographic designers, here are some links to the individual designers mentions, some designer showcase sites and prominent news data sites:

Visual Storytelling boldly claims that "data journalism is the future of journalism".  It has certainly become an indispensable part of modern news production, and given the predicted rise in automated or robot journalism, we are likely to be seeing more and more of it. However, a robot is probably only going to provide us with bar charts. For wit, design flair, and deeper understanding, we are dependent on a talented group of designers, who like all good journalists, take raw observation and convert it into information and insight. 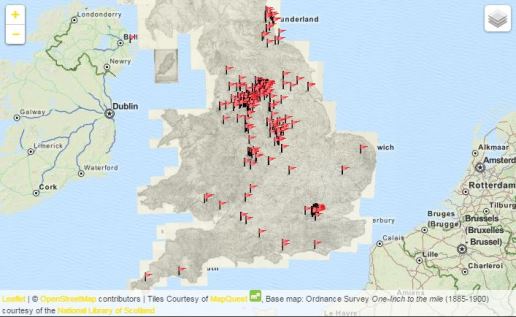 A final thought is why the skills applied to create infographics out of current news data are not applied more often to historical news data? More and more is being done by researchers, here at the British Library and elsewhere, to undertake analyses of large-scale historical news data sets. There have been some visualisations produced, such as the maps generated by Dr Katrina Navickas for her Political Meetings Mapper project on 19th century Chartist meeting found in our newspaper archives. Machines are good at producing maps, but what more could be done if infographic designers could get their hands on such data? It's something we need to be exploring further.

Posted by Luke McKernan at 4:28 PM