There's nothing quite like a worldwide story such as the Olympic Games for showing how all news is relative. There is no absolute concept of what is news: it is always determined by the particular audience of which we are a part. The news tells us where we are, and who we are. Here are newspaper front pages from around the world for today, Tuesday 16 August 2016, each reporting on the Games from their particular perspective, just to prove the point: 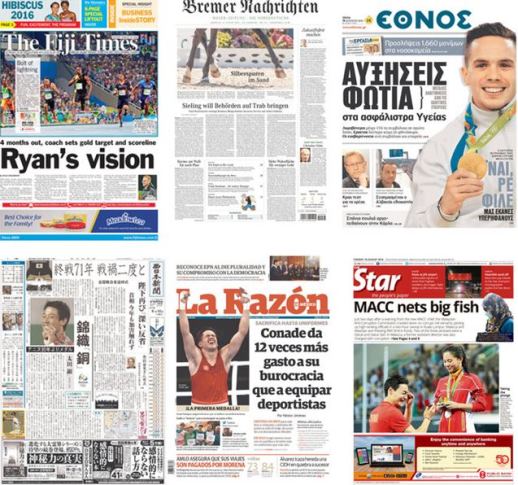 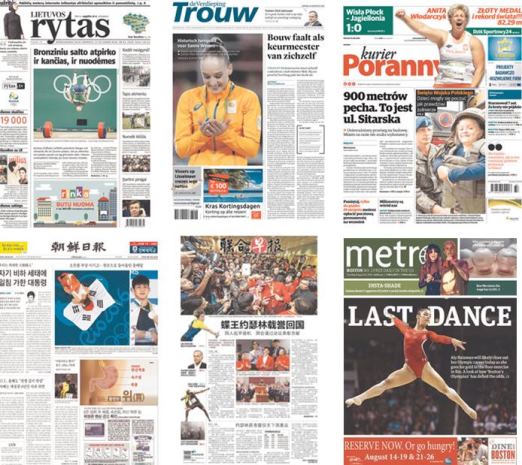 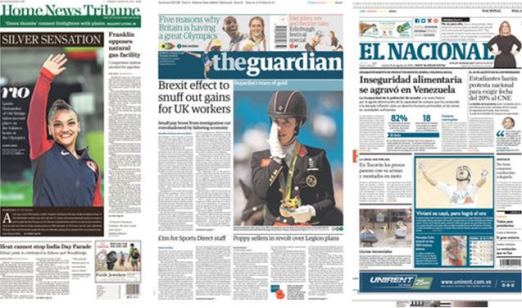 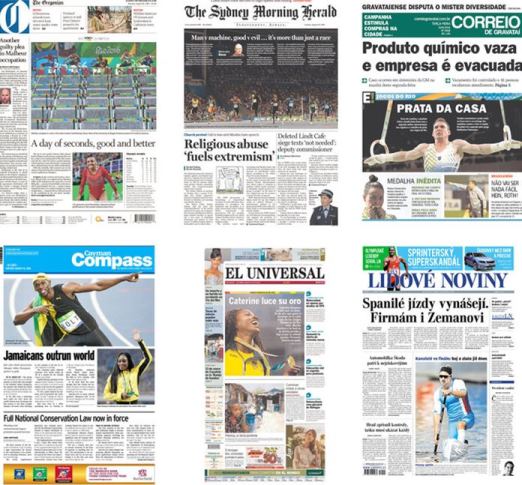 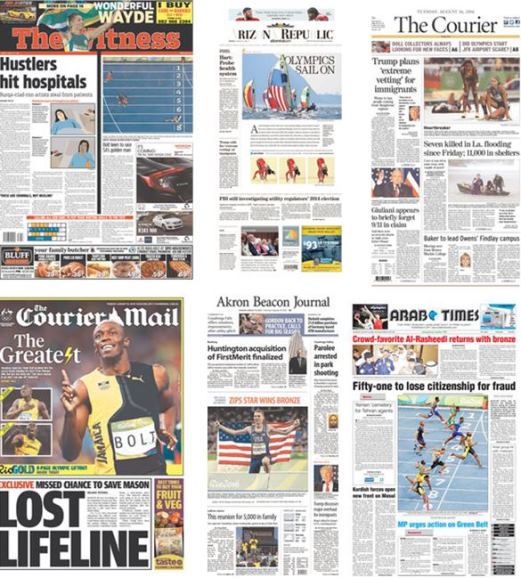 Newspapers may be in decline, but that isn't stopping publishers coming up with fresh ways in which to produce the news in print.Over the past two years we have seen four new 'national' newspapers appear in the UK: The National, The New Day, 24 - The North's National and The New European. Each presents a different twist on the idea of what a UK national newspaper means, targeting a different sector of the nation in ways that bring national divisions into sharp relief. Not all have managed to survive.

The National is a Scottish daily, produced by Newsquest as 32-page tabloid and sister paper to The Herald broadsheet. It was launched on 24 November 2014 in the wake of the Scottish referendum, with a strong pro-independence line. It was initially produced an a five-day trial basis, an experiment that was extended after strong sales in the first week. The original print run was 60,000 copies, but although the number has fallen to below 20,000 copies (plus around 2,500 digital subscribers), the newspaper has survived, moving from five to six issues a week in January 2015.

The New Day was launched by Trinity Mirror on 29 February 2016, as a daily title in a 40-page tabloid format. It was heralded as the first new British national daily newspaper since i in 2010 - depending on how you identify a 'national' title. It boldly chose to have no digital manifestation, its website being a mere holding page. Initially priced at 25p, this rose to 40p and then 50p. It was aimed at an audience that had given up on newspapers, which was always going to be a challenge. Fatefully the newspaper was given the slogan "Life is short, letâ€™s live it well", because its life turned out to be short. A hoped-for circulation of 200,000 copies was never achieved, and after two months and sales having dropped to 30,000 copies the title closed on 6 May.

24 - the North's National was launched by the CN Group as a 40-page tabloid on 20 June 2016, priced at 40p. It billed itself as being a national newspaper with a "distinctly Northern perspective". Distributed across north west England and southern Scotland, targeting an area not reached by the free Metro newspaper, it aimed to rethink where the centre of national news should be. Much of its copy came from the Press Association. It turned out to have a shorter life than even The New Day, closing after just a month on 29 July 2016, having found sales to be disappointing and the challenge of "squeez[ing] into beside the big beasts of the daily market" too great.

The New European was launched on 8 July 2016 in the aftermath of the EU referendum result, published by the regional newspaper group Archant in an eye-catching Berliner format, a weekly title priced at ÂŁ2. Remarkably, the newspaper was produced just nine days after the idea was first proposed. Aimed at "the 48%" who voted Remain, and distributed in those areas of the UK where the majority voted that way, the paper was announced as being a 'pop-up' title, to have just four editions initially, before the publishers would review the situation.  The title turned out to be a success, indeed profitable, with further editions now promised "on a rolling basis".

All four titles have been aimed at different sectors of the nation, with different ideas of what 'nation' actually means. They represent as much uncertainty over identity as they do uncertainty over newspaper publishing business models. Of course, few national titles have ever reached the entirety of the UK, strongly delineated as it is by region, nation and class, but these new titles suggest that the struggle for print newspapers today is as much about defining an audience as finding it.

The two that have succeeded (so far)  have done so through strategies that limited risk by starting off with test publications. Each has been aimed at audiences impassioned by referendum results that did not go their way, and sustained by a belief that change may still yet happen. Ultimately though, The National and The New European have succeeded through having strong content. It is not enough simply to identify a supposedly neglected community - you need to give them something to read.

All four titles have been archived by the British Library - The New Day and 24 - The North's National in their entirety.

Posted by Luke McKernan at 4:00 PM