The incoming US president, Donald Trump, is rewriting the book on the political process. However, despite the apparent creation of policy via social media, the real impact Trump has made since the presidential election process began has been through the more traditional media, particularly television.  His statements made through Twitter have been picked up by newspapers, television and radio, and it is here that the seismic realignment of American political priorities is being digested and disseminated. Twitter has been used to ignite a media process. Social media remains for Donald Trump a means of being on TV, where his mass audience lies (Trump has 18.6m Twitter followers, but there are 114m television sets in the USA alone). 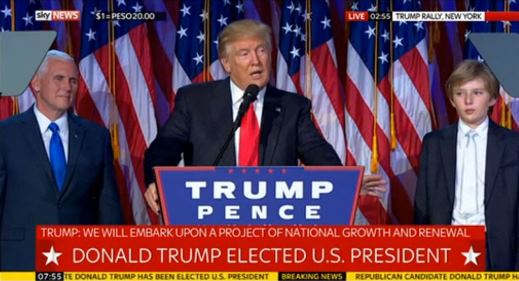 From the Sky News coverage of the US presidential election result, 09/11/2016

Trump's impact on television in Britain can be traced through the news and current affairs programmes recorded for the British Library's Broadcast News service. As well as recording regular television and radio news programmes each day from 22 UK and international channels, we have recorded numerous special programmes on Trump and the US election. On 8/9 November we recorded the election night programmes of BBC One, ITV1, Sky News, Al Jazeera English, CNN, RT (Russia Today), Channels 24 (Nigerian television) and CCTV (China). All of these can be found on our Explore catalogue with links to the playable programmes, which for copyright reasons can only be played on terminals at our London or Yorkshire sites. For ease of searching it is best, if you are onsite and using a British Library terminal, to go to the Broadcast News service itself (http://videoserver.bl.uk) and use the Advanced Search facility to select all recordings for 8/9 November 2016.

We also have many individual television programmes produced through 2016. of which the titles below are only a selection. They document not only the events of recent history, but the struggle that the often incredulous traditional media have had in trying to come to terms with the Trump phenomenon. The links are to our catalogue records, but again please note the programmes will only be playable on a British Library terminal. Descriptions in inverted commas are those provided for the programmes as part of the EPG (Electronic Programme Guide).

We will of course continue to record the television news throughout 2017 and beyond. For discussion of the impact of Donald Trump's tweets on the news agenda, see What really happens when Donald Trump goes on a Twitter rampage (Quartz, 11/12/2016), If Trump Tweets It, Is It News? A Quandary for the News Media (New York Times, 29 November 2016), How Trump Took Over the Media By Fighting It (Politico, 5/11/2016), or Why the establishment was blindsided by Donald Trump (Washington Post, 28 October 2016).

Or you can check every Trump tweet, the deleted and the active, with telling categorisation, at the admirable Trump Twitter Archive.