The latest addition to the electronic newspaper resources available to British Library readers is one that we're particularly pleased to have secured, the Rand Daily Mail. Published from 1902 to 1985, the South African daily newspaper was renowned for its anti-Apartheid stance, with notable coverage of the Sharpeville massacre, the Soweto uprising and the death of Steve Biko. Closed down in controversial circumstances in 1985, the entire newspaper is being digitised and made available by research materials service Readex. Happily the British Library is making the entire archive available for remote access to anyone with a Reader's Pass. 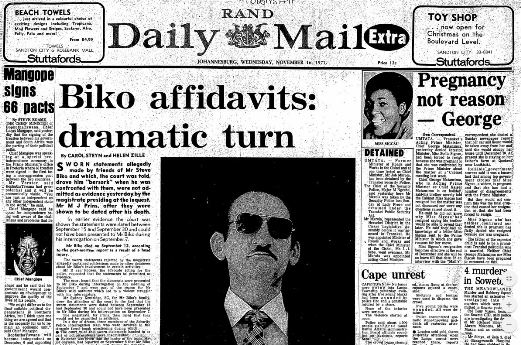 The Rand Daily Mail's renowned African Affairs Reporter, Benjamin Pogrund, wrote recently on the Readex blog about the significance of the newspaper and its archive:

The Rand Daily Mail was ahead of its time in reporting and exposing apartheid evils and in opposing oppressive government. This is why it was shut down.

The Mail was always a contradictory newspaper: although owned by mining interests from its start in 1902, it was known for siding with the underdog – which, for the first two-thirds of its existence, meant the white underdog.

That changed in 1957 when Laurence Gandar—a quiet, reserved man—became editor. Little was expected from him except professional journalism. But he proved to have radical ideas and compassion, and he had an inner core of steel. Gandar dissected apartheid with deep and brilliant writing that electrified the country.

Gandar took his pioneering into the news columns, assembling a staff of journalists whose political views stretched from left to right but who shared a commitment to fair and honest reporting, investigation and robust comment. The newspaper became the pacesetter in illuminating dark corners of South Africa and gave hope to blacks by pointing to a new direction for the country. It transformed itself, the rest of the Press and deeply influenced the political scene.

The board of (white) directors soon turned against Gandar and in time got rid of him. His successor, Raymond Louw, made his own singular contribution: he invested the Mail with a tough news sense while retaining its policy strength.

Integral to this was that the Mail turned the newspaper adage, “When in doubt, leave out,” on its head. Instead, as the authoritarian government’s restrictions grew on free publication, the newspaper sought to get as much into the open as possible. It wasn't always consistent; but right up to the end, even when tight laws and controls were throttling the Press, the Mail ensured that no-one would ever be able to say that they had not known about the ravages of Afrikaner Nationalist rule.

The Mail was admired by most South Africans of all colors and was honored by its international peers. The reason for respect was why it was loathed by many, but by no means all, within the white community, and they finally prevailed in getting the commercial owners to close it in 1985.

It's exciting to know that with digitization the Rand Daily Mail's treasure store of information about crucial years in the old South Africa will now be more widely available.

Pressures which led to the newspaper's board seeking a change of policy to reach out to more to a prosperous white audience ultimately proved damaging to sales and led to the newspaper's closure. The current owners, Times Media Group, decided in 2014 to resurrect the newspaper as an online archive and, through Readex, sought out the best materials, including the incomplete run of the title held by the British Library.

We are delighted that not only is the electronic archive now available in our Reading Rooms, but is available to British Library Reader pass holders via our Remote Resources service. It therefore joins the small but significant number of electronic newspaper resources to which we subscribe that we can offer to Library users wherever they might be, so long as they have Reader's Pass (information on obtaining such a Pass is here). Other titles available in this way include:

We therefore have a particular strong remote access offering for researchers of African news. The Rand Daily Mail online archive is not complete as yet - currently it runs 1937-1985, but eventually it will contain the full run of 1902-1985.