Fake news is probably as old as news itself. Certainly, as far as the British Library is concerned, it goes back to 1614 at least, when the good people of Horsham in Sussex were told of the dragon in their area that was causing great annoyance. Whether those who produced this newsbook believed what they were telling to be "true and wonderfull", who can say? 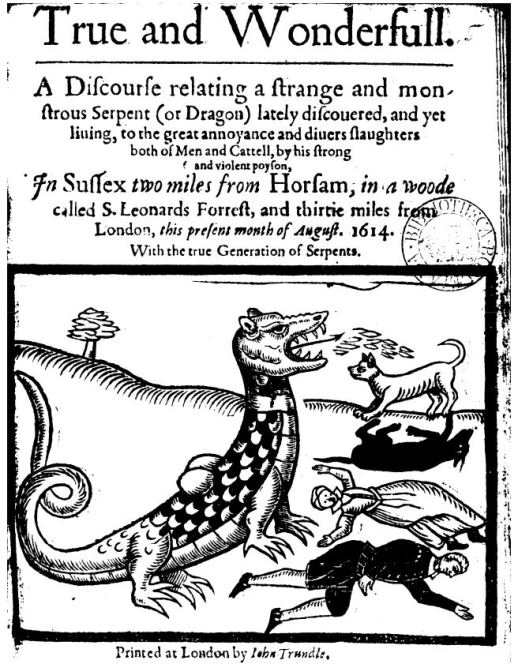 True and Wonderfull. A discourse relating a strange and monstrous serpent (or dragon) lately discovered, and yet living in Sussex, 1614 newsbook

Today, the subject of fake news is hot news, coming out of the 2016 US presidential election, but with deeper roots in the clash between traditional news providers and the search engines and social media sites through which so many now discover the news that they want to see. Fake news ranges from deliberate falsity, to news you disagree with, to satire. This special edition of the St Pancras Intelligencer rounds up some of what is being said and done about fake news today.

Fake news: what is it, and how can we tackle it? (Digital Social Innovation) - A handy summary from Toby Baker of NESTA

Fake news. It's complicated (First Draft News) - Claire Wardle attempts to explain and categorise the many types of 'fake news'

Fake News Watch - Want to know what is a fake site, a satire site, or a clickbait site? Fake News Watch attempts to list them (mostly if not all American). Other lists of fake news sites have been produced by ThoughtCo, Snopes, The Independent, and of course Wikipedia

The Ultimate 'Fake News' List (Infowars) - But just to show that one person's truth is another person's outrageous lie, here's an American far right show's listing of the fakery it sees in the mainstream media

CrossCheck - A fact-checking site from First Draft News, formed through a coalition of 37 publishers, mostly from France and Britain, including the BBC, Channel 4 News, Le Monde, BuzzFeed, and Agence France-Presse. Digiday's report European newsrooms are forming a united front against fake news gives the background.

Fact Check blog - Channel 4 News has produced a fact check blog following a season of programmes on fake news (including a one-off comedy show). Awkwardly the news programme made a bad slip on the day of the Westminster attack of 22 March, naming the wrong person as the perpetrator, as Richard Smallbrook covers in Westminster attack: Channel 4 learn hard lessons about the fog of breaking news (The Conversation)

RT separates facts from fakes with new online project (RT) - Not to be outdone, RT (Russia Today) has launched its own fact checking service in the battle against fake news, Fakecheck

Building Global Community (Facebook) - Mark Zuckerberg has issued a manifesto, which in part addresses the topic of the distribution of fake news (Facebook having been the target of many of the complaints made):

We've made progress fighting hoaxes the way we fight spam, but we have more work to do. We are proceeding carefully because there is not always a clear line between hoaxes, satire and opinion. In a free society, it's important that people have the power to share their opinion, even if others think they're wrong. Our approach will focus less on banning misinformation, and more on surfacing additional perspectives and information, including that fact checkers dispute an item's accuracy.

America needs a radical new market intervention similar to that made by the UK Government in 1922 when it issued a Royal Charter and established the BBC ... If, instead of scrapping over news initiatives, the four or five leading technology companies could donate $1 billion in endowment each for a new type of engine for independent journalism, it would be more significant a contribution than a thousand scattered initiatives put together. 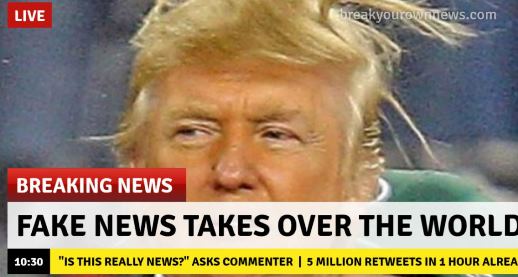 'Fake news' inquiry (Parliament.uk) - The Culture, Sport and Media Committee is conducting an inquiry into fake news and its impact

Announcing New Research: "A Field Guide to Fake News" (First Draft News) - First Draft News have also announced a project that aims "to catalyze collaborations between leading digital media researchers, data journalists and civil society groups in order to map the issue and phenomenon of fake news in US and European politics"

Updates from the fake-news world (NiemanLab) - US journalism studies site NiemanLab provides useful round-ups of the efforts being made to tackle fake news. The latest update, Is it still fake news if it makes you feel good?, has interesting points to make about the sharing of positive but made-up news

Trump’s “fake news” playbook has roots in a 180-year-old hoax (Quartz) - Corinne Purtill takes the issue back further to 1835, and the widespread report on life having been discovered on the Moon

Fake News : The Greatest Lies Ever Told (TruePublica) - So where are the UK's homegrown fake news sites? In a contentious thought piece, Graham Venbergen argues that "In Britain at least, fake news websites have failed to get a grip in the political arena. This is because traditional British news outlets, are already highly accomplished at stretching the truth to its limits and yet still get away with it"

Britain Has No Fake News Industry Because Our Partisan Newspapers Already Do That Job (Buzzfeed) - Jim Waterson similarly argues that very limited appetite for completely fake news in British politics, thanks to its highly partisan newspapers

The Choose-Your-Own-News Adventure (New York Times) - Jim Rutenberg illustrates how we can escape reality by pursuing news worlds that match our expectations. But isn't this how news has always worked?

The Institute for Studies has shown that real news is bad enough already, and therefore all fake news from now on must be unbelievably delightful. Professor Henry Brubaker said: “If the ‘news’ on social media is just whatever b------- anyone shares, then instead of ‘Muslims in council-backed halal Easter outrage’ why not ‘Puppies discover limitless cold fusion energy source’? 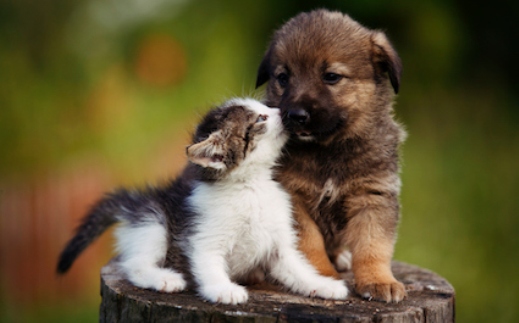 Posted by Luke McKernan at 7:59 AM