Newspaper art, by its very nature, is an ephemeral art form, sprawling in number and fleeting in effect, so it is no easy task to research the field of Victorian Graphic Journalism. The role of Special Artist – or artist-reporter – as a recognized profession came into existence in the mid-nineteenth century. The seminal event in its early history was the founding of the Illustrated London News in 1842, and that of its chief rival, the Graphic, in 1869. 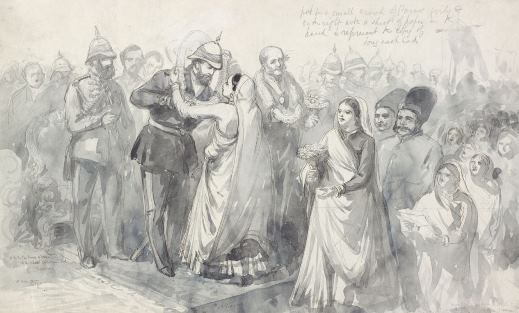 The critical innovation that made it possible was the discovery of a wood engraving technique by Thomas Bewick, back in 1791, which enabled images to be printed simultaneously alongside text.  But it was not until Herbert Ingram, the founding editor of the ILN, seized on its potential, that the pictorial press came into its own. Ingram formalized the practice of publishing images to accompany newsworthy events.  As one of the leading Special Artists, William Simpson, would reflect, you did ‘not hear of the Special Correspondent during the wars of Napoleon, but between 1815 and 1854 a great change had taken place in the character and position of the newspaper press. It was this change that evolved the “Special” (Notes and Recollections of My Life, 1889, National Library of Scotland).

Acknowledging that historical events had previously been illustrated, Simpson identified that the key distinction was that the artist was now expected:

‘to be always on the spot, jotting down in his sketch-book what he saw with his own eyes. … [he] sees what takes place, and his work is immediately given forth to the world, so that its accuracy can be tested even by the actors in the historical event.’

Convinced of the importance of the new profession of which they were part, because it meant accurate, visual records existed of all the most newsworthy events of Queen Victoria’s reign and – most importantly – had been communicated back to the British public through the medium of the press, Simpson and his journalistic colleagues, all household names in their day, believed that their work would be highly prized by ‘future historians’.  However, contrary to their expectation, they, and the imagery they produced, have been largely forgotten. If they are remembered, it is as pioneering war artists – rightly so, as the Crimean War of 1854 marked the point at which the fledgling profession truly took off. Yet my research into their work over the past decade has revealed that the scope of what they achieved is even greater. I now share their conviction that they deserve to be celebrated - in tandem with their counterparts, the special correspondents - as the progenitors of our modern media world.

Part of the reason for their neglect comes back to the relative inaccessibly of the art form they created, the sheer scale of its production and the wrongful assumption that the original sketches were destroyed in the process. However, pockets of the original artwork do still exist, such as this evocative sketch by William Simpson of the Prince of Wales presiding over the School Children’s Fete in Mumbai in November 1875, now in the collection of the Mitchell Library in Glasgow (see above).

It is the digital innovations of the twenty-first century that are providing the means for us to look back and reassess the advances of the nineteenth – not only in terms of locating the images in digital form, but also by providing platforms in which to group, analyze and ultimately represent them as a reconstituted body of work.  Picturing the News: the Art of Victorian Graphic Journalism, the online exhibition I have co-curated with Cathy Waters, is one result. Professor Waters and I will be talking about ‘Rediscovering the Art of Victorian Graphic Journalism’ as part of the AHRC’s Being Human Festival in the Foyle Room at the British Library on Thursday 23 November. If you cannot get there but are interested in learning more about the subject, please visit https://research.kent.ac.uk/victorianspecials/.