We're delighted to be able to announce a significant new digital resource using newspapers from the British Library's collection. African Newspapers: The British Library Collection is being offered by the academic publisher Readex. The collection comprises sixty-four newspapers titles, all dating from 1901, that were published throughout Africa, chiefly in English. 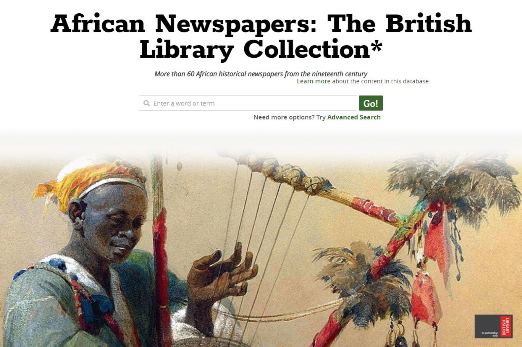 The British Library has substantial collections of newspapers from the African continent, particularly for the period of the British Empire, almost none of which have been available digitally before now. Ranging from 1840 to 1900, the newspapers cover the period of European exploration, colonialism and the first steps towards self-governance. The newspapers contain news reports, articles, letters, advertisements, shipping reports and obituaries, providing an invaluable portrait of a continent in transition.

The available titles are still being added to, but the finished resource will include such titles as Central African Times, Egyptian Gazette, Times of Marocco and the West African Reporter. The territories covered include the countries now known as Djibouti, Ghana, Nigeria and South Africa, and the islands of Mauritius and Saint Helena. All are fully word-searchable and browsable.

The Egyptian Gazette, from African Newspapers: The British Library Collection

We have a mixed model for the digitisation of newspapers. For British and Irish newspapers, chiefly regional, we work with family history company Findmypast, which produces the British Newspaper Archive website. Recently we announced that the British Library has started digitising newspapers itself, concentrating on some out-of-copyright (pre-1878) newspapers published in London, whose physical originals are often in a poor or unfit state. And we work with academic resource providers such as Readex, Cengage Gale and Adam Matthew Digital, who create thematic packages which sometimes include British Library newspapers and periodicals and are marketed to educational institutions. It's a complicated picture, and not everything can be made accessible to anyone anywhere, but through through such collaborations we can make far more available digitally than we could ever achieve alone.