The British Library (and its previous incarnation as a department of the British Museum) has been collecting newspapers for over 200 years. The ways in which these items have been acquired, processed, and stored have changed over time as priorities, policies, locations and technologies have developed, but some historic practices have had interesting implications for our current Heritage Made Digital programme to digitise a number 19th century newspapers. The newspapers we are digitising are mostly London based, and we are focussing on titles that have a number of volumes in poor or unfit condition, with the aim for filling in some gaps that currently exist in the digital archive. 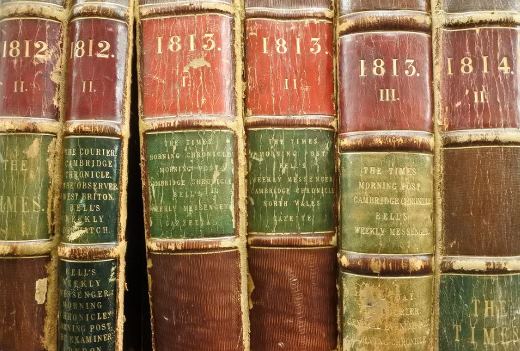 One of the practices that has had a real impact on the way we have approached this digitisation project is the way in which items have been bound in the past for storage and preservation. When thinking about how newspapers are stored by the British Library, most users probably imagine that complete runs of a title, for instance the Morning Herald, would be held together. But that hasn’t always been the case. For ease of processing and storage and to conserve space, many newspapers were held in annual sequences, rather than in title runs. So newspapers published in 1832 were held together, and these were followed by the titles published in 1833.

For many newspapers, particularly the dailies, this simply means that one or more volumes of a title are held in each yearly sequence. But for a significant part of the collection, mostly weekly titles of 12 pages or less, for which the British Library collected only one edition, there simply wasn’t enough material to make up a bound volume on their own. This has meant that there are many volumes containing two, three or sometimes more titles for a year. For example, a volumes currently sat on my desk contains both The Ballot and the Weekly Times for 1831.

The Ballot and the Weekly Times in one volume

This practice saved space and money by reducing the number of bindings produced for each year. There were no strict rules about how many titles or pages constituted a volume, and practices varied over the years, but mostly newspapers of a similar size are bound together, as this makes them easier to store. In most cases all of the items bound into a volume are newspapers, but occasionally they also contain periodicals bound, and these fall under the care of other departments within the British Library.

This has led to some complications in the workflow of our digitisation processes. The catalogue records for newspapers do not contain details of how they are bound, so we are often unaware of whether items are bound individually or in multi-title volumes, or which items are bound together. This sometimes means that a single volume is called up multiple times by our digitisation team, as several titles from our list are bound together for one or more years. It has also made the process of scanning titles more laborious and complicated. Staff do not simply open a volume and scan the contents, they have to identify the correct title, and work out where it starts and ends, checking this against the details that are on the catalogue records.

It has also raised some interesting questions for our digitisation project. What impact does going through the digitisation process several times have on volumes, particularly as many are already in a poor or unfit condition? If one of the titles we are digitising is bound in a multi-title volume, should we be digitising all of the other titles with which it is bound? Should we be digitising the periodicals that are contained within these volumes, even though they are not officially part of the newspaper collection? How far should what is digitised follow the physical reality of what is archived?

We are still working to answer some of these questions. In general we have had to stick to digitising only the items already on our list, as otherwise the numbers could spiral out of control, and we might end up digitising large numbers of titles that do not meet our criteria (i.e. in a poor or unfit condition; out of copyright; and with a circulation beyond London). We look closely at the other titles we come across, and access them against our objectives, but in most cases there are reasons why they had not already been selected.

Despite their complications these multi-title volumes do also provide opportunities. I will talk in a future post about serendipity and its role in newspaper research, but it has also played a very small role in our selection process. As mentioned above, in most cases we have stuck only to those titles already on our selection list, but there have been a few occasions when looking at a volume, we have stumbled across another newspaper that has proved interesting enough to make it onto our list. It has also made us think a lot about how and why things were done in the past, and how practices evolve, giving us a better understanding of how the collection was, how it currently is, and how it could be in the future.

Posted by Luke McKernan at 1:24 PM