Here is a remarkable image. It looks, at first sight, like a collection of prosperous mid-Victorian gentlemen: perhaps a gathering of local politicians, or merchants of some kind, preening themselves with civic pride. But then we see the caption that accompanies the image: ‘The Great Pugilists of England’. They are boxers, presented in their Sunday finest. But look again to the right, and there is something we might not expect: one of them is black, presented without qualification as an Englishman among Englishmen, someone to be admired. 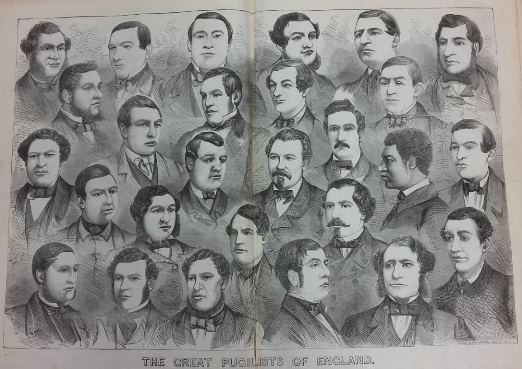 The image comes from Illustrated Sporting News and Theatrical and Musical Review, 14 February 1863, one of the newspapers we are digitising as part of our Heritage Made Digital programme. The man is Bob Travers, a lightweight, one of a number of black boxers who fought at this time when the sport was bare-knuckle, the brutal contests could last for hours, and rounds could exceed a hundred (a round ended when a fighter fell and had to come up to a line, or scratch, for the next to begin - if one failed to 'come up to scratch', the contest was over). The police were never too far away, ready to break up what were viewed as riotous assemblies. Most, if not all the black boxers who fought in Britain in the 19th century were, in fact, American, born slaves or the free-born sons of slaves who managed to cross the Atlantic to try their chances in a land where pugilism had an avid following.

The first such fighter may have been the man billed as the ‘Black Dynamite’, mentioned in a report in The Times on 27 April 1786. He was followed by the celebrated Bill Richmond, who came to Britain in 1777, became a servant to a peer, bought a pub near Leicester Square with his winnings as a fighter, and established himself as a trainer. His greatest protégé was another former American slave, Tom Molineaux, whose two fights with Tom Cribb in 1811 (both won by Cribb) was considered the very peak of the regency era of prize fighting. Other black fighters that followed in Britain through the 19th century, of whom we sometimes know little more than a name or a nickname, included John Augustus Edward Plantagenet Green, Frank Craig, ‘Massa’ Kendrick, Bob Smith, Sambo Sutton and James Wharton. 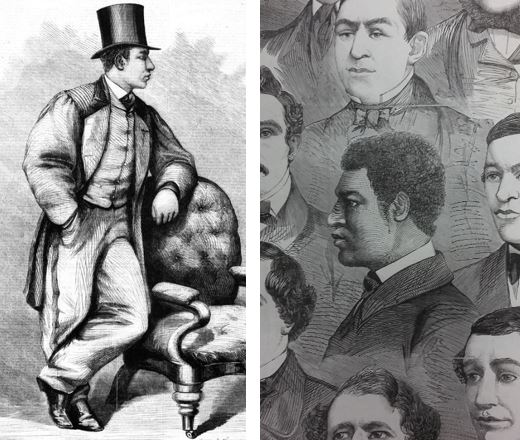 Bob Travers was American too. Some confused contemporary sources tried to suggest that he was British born, but he was born in Norfolk, Virginia in 1832, though he came to Britain as a child, when his father moved to Truro in Cornwall and ran a shop selling crockery. He was, apparently, Charlie Jones then, but a talent for fighting, nurtured by English middleweight Nat Langham, saw him enjoy some success over a 10-year career as a pugilist under the name Bob Travers. His earliest known bout was in 1854, his last in 1863. He is best known to boxing historians for his 1860 bout against the great Jem Mace, when Travers displayed some dubious tactics (falling without a blow having been landed) and was eventually disqualified. Referred to rather disparagingly in some sources as ‘Langham’s Black’, he was more impressively billed elsewhere as the ‘Black Wonder’.

There was only a very small black population in Britain in the 19th century. Few black figures came to the forefront of British consciousness: among them were political radical William Davidson, hanged for his part in the Cato Street conspiracy of 1820; the Chartist William Cuffay; Crimean War businesswoman Mary Seacole; circus entertainer Pablo Fanque (of 'Being for the Benefit of Mr Kite' fame); and the composer Samuel Coleridge-Taylor. Prominent black American visitors included abolitionist speakers such as Frederick Douglass and Ida B. Wells, and the Shakespearean actor Ira Aldridge.

What seems notable about Travers, and some other black sportsmen of the mid-19th century that were reported on in the pages of the Illustrated Sporting News and Theatrical and Musical Review, Bell’s Life and other sports-focussed papers that sprung up at this time (Sporting Life, Sporting Telegraph, Sporting Gazette), is how they were taken entirely at their own merits. Of course in real life they were subjected probably to daily racial abuse. Someone such as Bill Richmond, with his social connections (he even served as one of a group of pugilists ushers at the coronation of George IV in 1821), was unusual. For those such as Travers who toured the country, appearing before rough audiences, there would have been much to endure. Even friendly accounts in boxing memoirs of the period use language to describe him that we would now find offensive.

But in the pages of the Illustrated Sporting News and Theatrical and Musical Review things are different. Travers is one of us. More than that, he is an admired figure, a notable exponent of pugilistic science, an exponent of sporting virtue, despite what censorious authorities might say about the rough world of bare-knuckle fighting. Certainly his colour is referred to - he is variously labelled as 'The Black' or 'The Ebony Gentleman' in the characteristically florid style adopted for fight descriptions - but for most of the time he is simply Travers, or Bob.

The Illustrated Sporting News and Theatrical and Musical Review was founded in March 1862 to capitalize on the growing public enthusiasm for sport. Established by the London printer Edward Harrison, producer of numerous penny serials and weekly periodicals, the sports and games it covered included athletics, hunting, yachting, cricket, rackets, bowls, billiards, wrestling, the ring, pedestrianism, aquatics, golf, billiards, chess, cribbage, and coursing. True to its title, the newspaper also included coverage of various kinds of theatrical performance, increasingly so in its later years until the title closed in 1870. 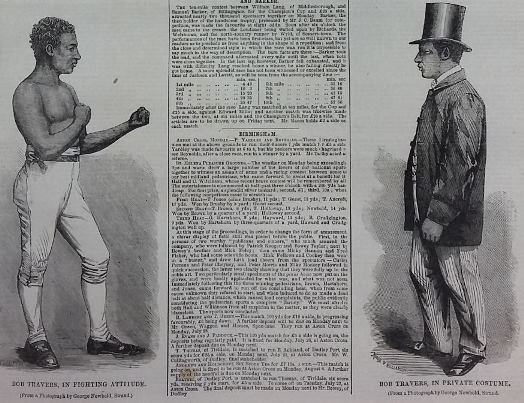 It specialised in wood engravings of sportsmen, many of them derived from photographs, which were sometimes sold separately and lined the walls of many a home and public house. They were literally the pin-ups of their time. Such was the importance of the illustrations that a separate version of the journal with images only, Gallery of Engravings (not held by the British Library) was also published, while the journal maintained an index of its illustrations for easy reference. Travers was illustrated on several occasions, both in fighting mode and in elegant private dress.

Travers was not a great fighter, but he was a dogged opponent, and a smart one. He was not averse to taking a fall when the fight was no longer going his way. He certainly seems to have had a sound sense of self-preservation, particularly in his latter years as a fighter, when retirement beckoned. One indication of the dangerous world in which he operated is his fight with Jem Dillon in 1863, when the newspapers reported the shocking news that Travers had died of his injuries following fifty-three brutal rounds. Two weeks later, Travers enjoyed a Mark Twain-like opportunity to tell the press by a letter that reports of his death had been exaggerated – throwing in an advertisement for his pub for good measure (like Bill Richmond, he had opened a pub, the Sun and Thirteen Cantons, off Leicester Square).

Travers retired from the ring at some point in the mid-1860s. Meanwhile boxing began to move away from its lawless roots. The Marquess of Queensbury’s rules, first set down around 1867, brought in some semblance of order and replaced bare knuckles with gloves. Travers was still around when the first world heavyweight championship fight, held in America between John L. Sullivan and James Corbett (the victor) in 1892, was fought with gloves. 16 years later Jack Johnson became the first black world heavyweight champion.

Maybe Bob Travers lived long enough to hear the news. We do not know where or when he died; he is last heard of in 1904. But we see him now in his prime, held up as an exemplar in the pages of the Illustrated Sporting News and Theatrical and Musical Review, taking his place among the great of England in his field. In the backwaters of the British sporting newspapers of the mid-19th century we can find some inklings of a society based not on race or class, but personal merit.

There is more information on Bob Travers on the Cyber Boxing Zone website, and in Kevin Smith, Black Genesis: The History of the Black Prizefighter 1760-1870 (iUniverse, 2003). On sporting newspapers of the period, see Mike Huggins, The Victorians and Sport (2004). On black Britons of the 19th century, see David Olusoga, Black and British: A Forgotten History (2017). On boxing generally, see Kasia Boddy, Boxing: A Cultural History (2008).