Vaccination and the media - a 19th century debate 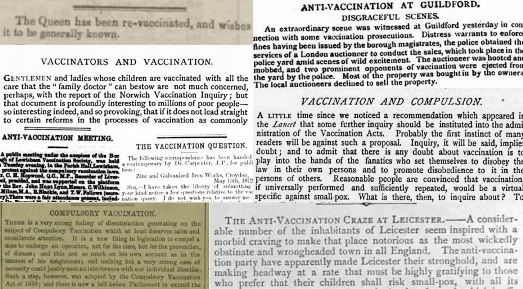 The 19th century had an anti-vaccination movement which organised meetings, wrote letters and even paid the fines of those convicted of refusing to have their children vaccinated. They wrote letters denouncing enforced vaccination, arguing that it was an encroachment by the government on civil liberties, and that the vaccination was as or more dangerous than the disease it sought to prevent. They produced pamphlets and political cartoons. The movement spoke to fears about overreaching state power and technology encroaching on personal freedom and an imagined pastoral idyll. On the pro-vaccination side, the debate used science and statistics to prove that vaccines were necessary, and argued that they were compulsory because they ensured the safety of all, especially the weak.

It was long known that infecting patients with a mild dose of smallpox led to them developing resistance to the deadlier strains (apparently some places had a tradition of blowing powdered smallpox scabs up the noses of patients to inoculate them - another reason to be grateful for the advances of science). In 1796 Edward Jenner ‘discovered’ that those infected with cowpox (a very mild disease) also developed resistance to smallpox. He developed the world’s first vaccination: the word comes directly from the cowpox method used – vacca is the Latin word for cow. Jenner’s vaccine spread in popularity and was made compulsory in several European countries, including England in 1856. Children were to be vaccinated within six or seven months of birth, and a fine of up to £2 would be given in the event of failure. Failure to pay the fine could mean, eventually, a prison sentence. In 1867, another bill was introduced requiring re-vaccination after puberty. It was at this point that the anti-vaccination movement took hold.

The debate played out in the newspapers: there were articles and letters to the editor arguing both sides. The controversy even affected newspaper advertisements: entrepreneurs advertised ointments which supposedly eased the skin complaints of those recently vaccinated: 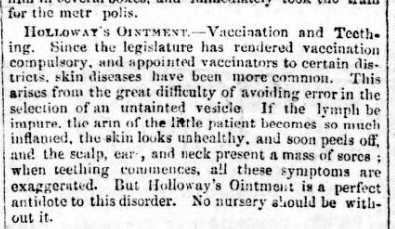 But the same advertisement is found in papers all over the country: It’s hard to imagine a movement of this type existing without easy access to mass communication. Letters to the editor, for example, proved an easy way for those with fringe views to put their opinions on an even footing with more commonly-held opinions. This access to a platform allowed the movement to assume an authority it would not otherwise have had: access to the same media as mainstream material can mean that both sides of an argument are equally valid, even when then isn’t the case.

But how big was the conversation about vaccines, exactly? Looking at a large sample of newspapers published over the period can give us some clues. This data is from a set of around 62,000 19th century newspaper issues held by The British Library and digitised with JISC funding. It’s a simple approach: counting the relative frequency of a word over time can give an idea of how important the topic was at any time, although it doesn’t tell us anything about why it was being discussed or in what way. It also misses out alternative spellings or mis-spellings. But it can help us to identify general trends. 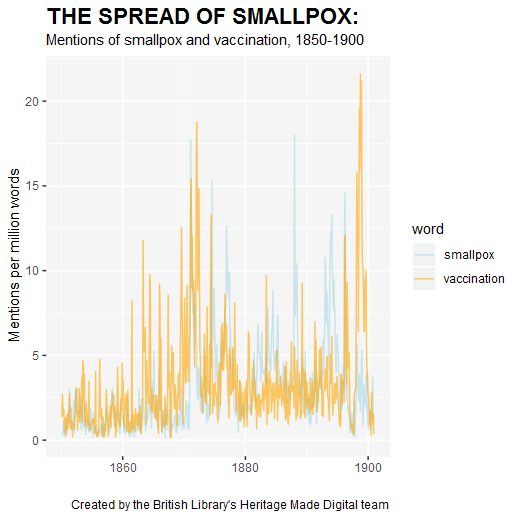 The debates themselves played out on the pages of the regional and national newspapers. They were bitter, and echoed those of today. A reprinted letter from The Lancet sums up some of the frustration on the side of the pro-vaccination:

The members of this league have some “talents for mischief,” not from the facts which the adduce, which are too insignificant to be noticed, nor from the arguments which they employ, which if they were only addressed to reasoning minds, would assuredly be recognised as puerile and contemptible, but these gentlemen wield more powerful arguments in support of the cause which they advocate. These are the hackneyed appeals to the ‘liberty of the subject: the resistance to a tyrannous enactment, and the publication of “striking” and dreadful cases of disease, and even death, as the results of vaccination.

Then, as now, the scientific and medical communities were frustrated by arguments invoking more abstract ideas: those that appealed to emotion over reason.

The insensibility of many persons to the danger of smallpox, and to the value of vaccination as a preventive, appears to arise from two causes; of which one is total ignorance of the horrors of the past, and the other is scepticism as to the representations of those who are well informed.

The author of an article in the Edinburgh Medical Journal, Dr. John Gairdner, used historical arguments to appeal to reason. He searched the archives to produce a list of royal family members who had died from smallpox. The influence of the monarchy on ordinary people was also used in other ways to promote vaccination: In February 1871 the Manchester Evening News reported that “The Queen has been revaccinated and wishes it to be generally known”. Perhaps these more narrative-focused, non data-driven arguments were seen to have more influence than statistics.

The anti-vaccination side had three main tactics. First was picking statistics which supported their argument. Second was appealing to arguments about personal freedom. In 1882, one letter to the editor of the Derby Chronicle tried to reason that vaccination should not be compulsory because the disease didn’t affect those already vaccinated:

When Mr. Cotteman has proved that doctors have a moral right to scratch us with a pin from which evil effects may follow, he may be able to prove that they have a right to insist upon vaccination. Yet this would be superfluous, since vaccination is a protection in his estimation. The protected being safe, why compel objectors?

This argument, of course, overlooked those who were unable to get vaccinated for health reasons, or the small percentage on which the vaccination had no effect.

The third tactic was supplying anecdotal evidence of individual cases where the vaccine had disastrous consequences. A writer to the Leicester Chronicle wrote in to describe a child that had been recently vaccinated, saying that it had been ‘fine, fair and healthy looking’ but after vaccination was covered all over with sores, “so much so that it is repulsive to see the poor thing”.

These groups were often hyper-local. Groups like the ‘Darlington Anti-Vaccine League’ had regular meetings and advertised them in local papers. The debate played out in the pages of the regional papers, rather than through national, official channels.

We can use news data to get some insight into the changing perceptions of the word ‘vaccination’. These word clouds illustrate the words that most commonly appear in sentences with the term: 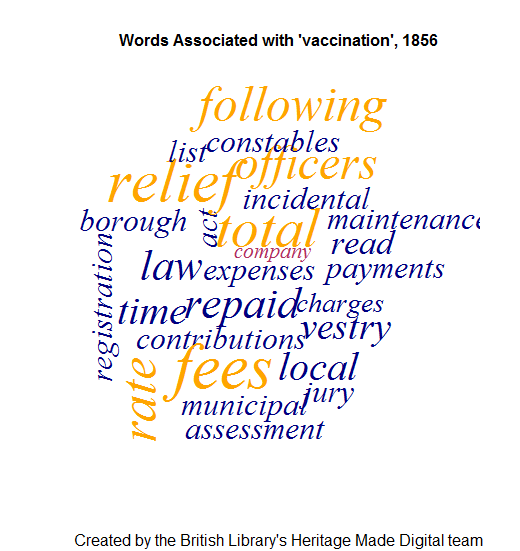 In 1856, the words are mostly related to the financial and administrative aspects of vaccination. Thirty years later, the mostly commonly associated words have become a mix of administrative-type words, and some terms which clearly relate to suspicion and controversy surrounding compulsory vaccination. The conversation in the newspapers about vaccinations clearly changed in the intervening years. Now vaccination is mentioned with ‘child’ and ‘children’. It doesn’t prove that the conversation was negative, but it does show that newspapers were commenting on the more human element of vaccination. It’s a personal as well as a public conversation. 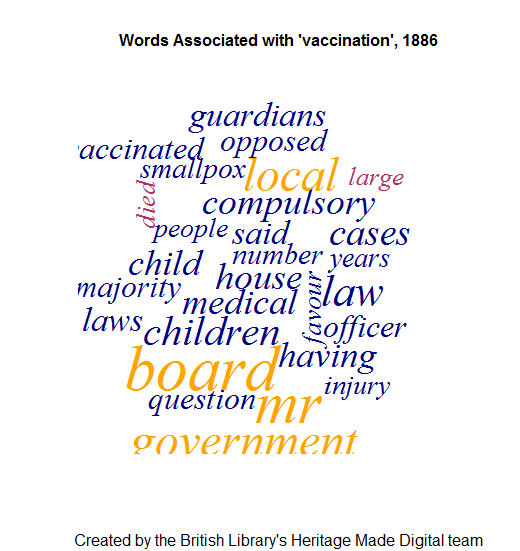 Compared to the fear of cholera, the attention given to smallpox by the newspapers was small, and despite spikes at the end of the century (when a ‘conscientious objector clause’ was inserted into a new vaccination bill), generally interest in the controversy surrounding vaccinations waned. What a good conspiracy really needs is air: studies have shown that more we are exposed to an idea, the more likely it is we’ll believe it is true, regardless of the evidence we’re given. It’s possible that the anti-vaccination movement lost steam because it wasn’t being talked about in the newspapers any more. 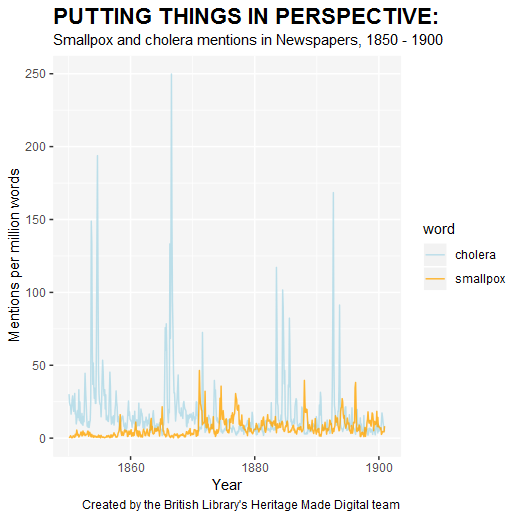 The debate surrounding smallpox vaccination tells us something about the ways in which information and communication can be used to spark debates that previously would have stayed hidden. Cultural movements, however small, are often facilitated by the expansion of access to new technology (such as newspapers in the latter half of the 19th century, or the internet at the beginning of the 21st). When these technologies reach a critical mass, they expand the ‘public sphere’ to take in the viewpoints of the minority - even when those views cause us discomfort. Opposition to anti-vaxxers proved difficult: work like Gairdner’s book might have helped to counter the movement in a way that statistics themselves didn’t seem to. Time was the best opposition: in the long run, it seems that the movement against smallpox vaccination simply petered out. Smallpox vaccinations continued, and a worldwide programme led to the virtual eradication of the disease by 1980. 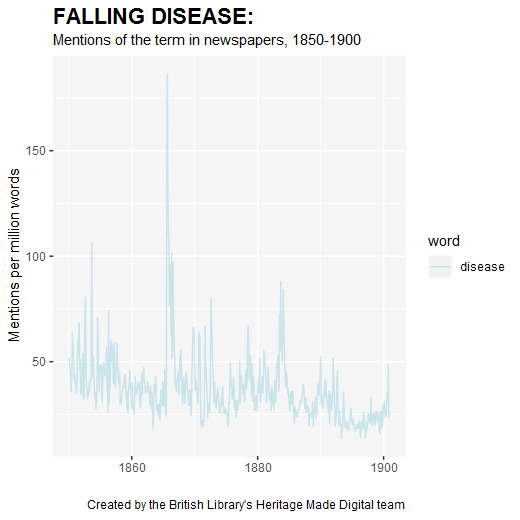 It may be surprising to see such strong opposition to vaccination in a world with such a terrible problem with disease. Today these diseases can seem far removed from our lives, but in the 19th century the evidence was so incredibly clear: smallpox infection rates plummeted in areas with vaccinations. People lived with the fear and threat of infectious diseases, and most families would have been affected, at some point, by diseases like smallpox. Despite this, there was still resistance to compulsory vaccination. Even in the face of overwhelming evidence, when the alternative was a very real chance of disfigurement or death, illogical viewpoints can take hold.

Without an outlet like a regional newspaper or Reddit forum, these fringe viewpoints can often stay buried. It’s only when a place is found for them to be debated that the ideas can really spread. Regional newspapers allowed the debate to reach all parts of the United Kingdom and helped the creation of hyper-local interest groups. Today, the internet allows for the spread of ideas to any part of the world, in a very short space of time. Fringe movements can reach a critical mass even though their number in any one area may be tiny. Do new technologies breed conspiracy theories? Is the debate related to the ease with which people can communicate over long distances, to a large group of people? Does the democratization of media bring together communities of like-minded individuals, and what consequences does this have for society? These are crucial questions of both the 19th century and our own.

"The race of mankind would perish”, wrote a correspondent to the Isle of Wight Observer in 1856,

did they cease to aid each other. From the time that the mother binds the child’s head, till the moment that some kind assistant wipes the death-damp from the brow of the dying, we cannot exist without mutual help. All, therefore, that need aid, have a right to ask it of their fellow-mortals; no one who holds the power of granting can refuse it without guilt.

Those in favour of vaccination would argue that herd immunity ensures the safety of all: claiming a right personally to refuse vaccination means increasing the danger to those who are unable to get protection through no fault of their own. The debate about personal freedom and public good still continues.