We hope readers will enjoy the series and seek out some of the recommendations.  The choices below have been made by Dr Andrew Hobbs, University of Central Lancashire, author of A Fleet Street in Every Town: The Provincial Press in England, 1855-1900. 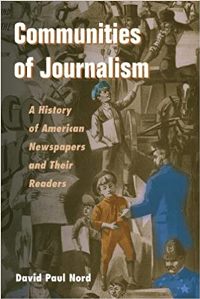 Communities of Journalism: A History of American Newspapers and Their Readers, David Paul Nord. Champaign. University of Illinois Press, 2001.

This collection of 12 scholarly articles on the production and consumption of newspapers ranges from the late 18th to the early 20th centuries, and contains the wisdom that comes from long and deep acquaintance with historical newspapers. The chapters that interested me as a PhD student were those looking at the readers. Nord uses traditional shoe-leather historical methods to tease out meaning from obscure sources, such as family cost-of-living budgets in US Commissioner of Labor reports of the 1890s (recording family spending on reading); a lists of subscribers to the New-York Magazine of 1790, what readers said about other readers in their letters to Philadelphia newspapers in 1793, or letters sent, not for publication, to the Chicago Herald editor in the early 20th century.

Nord repeatedly shows how historical readers are much more interesting than theoretical readers inferred from the text. Readers -- not journalists, editors or publishers -- decided the meaning of the papers. And his findings often lead to larger meditations on the changing place of newspapers in society.

This book gave me the confidence to search, and search widely, for evidence left behind by newspaper readers from long ago. 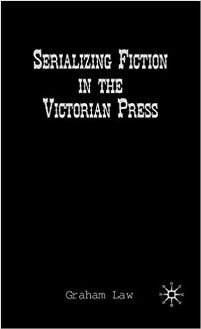 Law is interested in how, for a brief period in the 1870s and 1880s, British novels came to be published first as serials in local newspapers, rather than as books. Why was Tess of the d’Urbervilles commissioned by the owner of the Bolton Weekly Journal, rather than a London book publisher or magazine editor?

To answer this question, he carefully documents -- and connects – the plots of the novels, the authors (often obscure local hacks), fees, the geography of ad hoc newspaper fiction syndicates, circulation figures and more.

On the way, he provides many insights – that newspapers are cultural, not just political; that provincial British papers influenced American publishing; the popularity of a genre now extinct, news miscellanies such as the Sheffield Weekly Telegraph and Liverpool Weekly Post, and that the ‘New Journalism’ of the 1890s didn’t have to be like that – other options were available, as seen in Liberal provincial weekly newspapers. And many small local papers together made a national publishing platform – an idea I have milked in my own research. 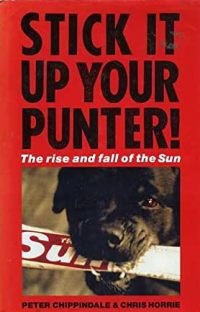 Stick It up Your Punter! The Uncut Story of the Sun Newspaper, Peter Chippindale and Chris Horrie. London. Faber, 2013 [orig.  piub. 1990].

This is the most unputdownable newspaper book I’ve read, invoking laughter and disgust by turns. It examines the modern newspaper phenomenon that was the Sun, the pre-eminent British tabloid, in its golden age, from Rupert Murdoch buying and relaunching it as a tabloid in 1969, through to 1990. It is full of atmosphere and insider anecdotes, many of them very funny.

When a complaining reader got through to editor Kelvin Mackenzie he demanded her name and address and told her she was now banned from reading the Sun.

The title is a play on ‘Stick it up your junta’, an infamous headline crowing over the sinking of the Argentine warship the General Belgrano, with the loss of 323 lives, during the 1982 Falklands War. The headline displays the schoolboy humour and political nous which was part of the paper’s phenomenally successful formula.

A similarly dark moment was the decision to support a cover-up of police responsibility for the deaths of 96 football fans in the 1989 Hillsborough disaster, blaming the victims. The Sun’s headline was ‘The Truth’. The atmosphere inside the Sun office, and Mackenzie’s decision-making behind the front-page story, make horrifying reading, like the rest of this book.

Dr Andrew Hobbs, University of Central Lancashire, author of A Fleet Street in Every Town: The provincial press in England, 1855-1900

Posted by Luke McKernan at 9:31 AM