We hope readers will enjoy the series and seek out some of the recommendations. We start with the choices of Beth Gaskell, Curator Newspaper Digitisation for the British Library's Heritage Made Digital programme. 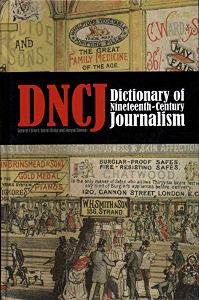 For anyone researching the nineteenth-century press, the Dictionary of Nineteenth-Century Journalism (DNCJ) is the go-to reference work. It defines key concepts, introduces numerous important people and titles, and uncovers some of the connections that underpinned the media environment of the time.

It describes itself as providing a ‘snapshot of British and Irish journalism in the nineteenth century’, acknowledging that the scale of media production at the time makes it impossible to cover everything in one volume. However, the examples that have been chosen for inclusion cover a huge range of formats, frequencies, readerships, economic and ownership models, and political alignments; important sub-categories of the press such as trade publications, and the religious press; as well as concepts such as distribution, ‘class publications’, and anonymity and signature. The result is that the volume’s sum total paints a fairly comprehensive picture of the nineteenth-century press.

The DNCJ’s dictionary format means that this is not a reference work to be read cover-to-cover, but something to be dipped into frequently. I have a copy of my desk that I refer to almost every day. 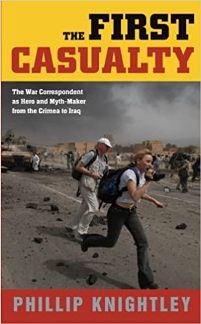 This incredibly readable book by Phillip Knightley charts the history of war correspondents, exploring their origins, investigating their experiences in various nineteenth and twentieth-century conflicts, and analysing the often conflicting roles they play in providing true accounts, boosting morale and negotiating censorship.

The Firsts Casualty has been a particularly significant book for me. Reading it sparked my interest in news and war reporting, inspiring me to undertake a project on the reporting of the Vietnam War during my A levels. Then, when I started my PhD, researching military newspapers and periodicals, it was the first thing I was suggested to read by my supervisors. I felt like I had come full circle.

It is a great resource for anyone interested in the history of war correspondents, war reporting, and the interaction between the media, the military, and civil society during conflicts. It also has useful notes and a great bibliography of further reading. 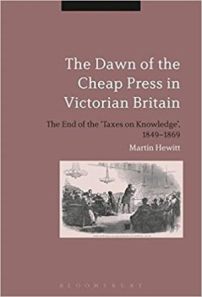 The Dawn of the Cheap Press in Victorian Britain: The End of the ‘Taxes on Knowledge’, 1849-1869. Martin Hewitt. London: Bloomsbury Academic, 2013.

While this book would appear to focus on a very limited twenty-year period in the mid-nineteenth century, its coverage and its implications are actually much wider. It gives a thorough background to the taxes and censorship that were imposed upon newspapers by the government, from the invention of the printing press through to the late nineteenth century. It is an essential read for anyone interested in the financing of newspapers and in the history of press freedom.

It is also a great read for anyone interested in the wider political landscape of the nineteenth century, in industrialisation and trade history, and in shifting historical ideas about reading, education, and the dangers and benefits of cheaply available information.

Posted by Luke McKernan at 9:50 AM