We hope readers will enjoy the series and seek out some of the recommendations.  The choices below have been made by Luke McKernan, Lead Curator News and Moving Image at the British Library. 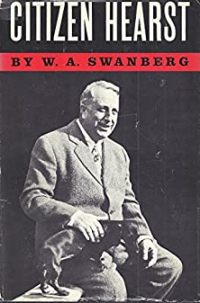 This was the first book about newspapers that I read. It is still one of the best. William Randolph Hearst (1863-1951) was the terrifying titan of American newspapers, whose eye for sensationalism and lurid headlines, concocted with a sometimes cavalier sense of ethical responsibility, had a profound effect on the modern era of news. He was among the most powerful men of his age, stood for President (unsuccessfully) and built up a vast, multi-media news empire that continues to this day as Hearst Communications. For many he lives on as the model for Charles Foster Kane in Orson Welles' 1941 classic film Citizen Kane.

American biographer W.A. Swanberg's life of Hearst matches up to the man. Scrupulously researched but dramatically expressed, it reads like the Great American Novel. The man, his times, and the media he controlled interweave in a compelling narrative. He is able to view Hearst sympathetically while at the same type making us shudder at his vanity, his greed and his cruelty. As Swanberg astutely concludes, "He was ... a Prospero and a Caliban, and the lucky ones were those who saw only his angelic side".

Notoriously, Swanberg's book was denied a Pulitzer prize, despite the recommendation of the advisory panel, supposedly because the trustees of the award did not consider Hearst a worthy subject for such a prize.  To read just one page of Citizen Hearst would prove how very wrong that judgement was. 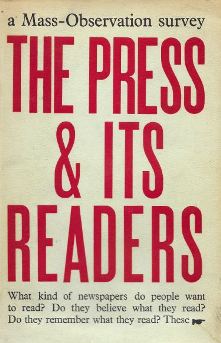 The Press and Its Readers: A Report Prepared by Mass-Observation for The Advertising Service Guild. London: Art & Technics Ltd, 1949

"There's something I dislike about newspapers, and that is that they don't tell the truth ... There's so much stuff not worth looking at, adverts, scandal, and all that stuff that isn't news"."

"Reading passes the morning, to tell the truth."

It is extraordinary how little attention most books on newspapers give to their readers. We learn about how the news has been written, financed, its personalities, its political influence and its ideology, but we seldom see newspaper history from the point of view of those at whom all this effort was directed. The Press and Its Readers is a marvellous corrective to such an attitude. Produced by the social research organisation Mass-Observation, it asks some basic, sensible questions: What kind of newspapers do people want to read? Do they believe what they read? Do they remember what they read?

The result is a bracing challenge to any belief that what is published is the same as what is read. Evidence is provided of indifference, scepticism, ignorance and sharp understanding, ranging from readers who cannot be bothered with the news to those who find their lives governed by it. It covers popular and 'quality' newspapers, dailies and weeklies, national and regional press, combining snippets from frank reader interviews with useful statistics and some striking statements that make it clear just how pervasive the newspaper was in the 1940s ("The Daily Express is read by one adult in every four ... The News of the World ... is read by every second adult").

The report is filled with entertaining nuggets alongside much practical information. It is of as much value to the researcher today as it was to the advertisers, politicians and publishers at whom it was originally aimed. It tells us that without an understanding of readers, we cannot understand the news at all. 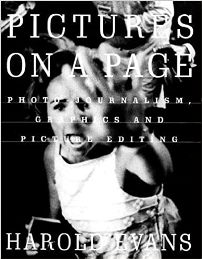 Pictures on a Page was one of a series of books written in the 1970s by Harold Evans, editor of The Sunday Times, on the practical business of producing newspapers. Titles such as Editing and Design, Handling Newspaper Text and News Headlines were to be found (and can still be found) on many a newsroom desk, but Pictures on a Page broke through to popular acclaim. It is simply the best-looking book on newspapers yet published. Evans's theme is the practices and principles of photo-journalism. He shows how news photographs are made, what makes a news photograph, and how presentation and context are everything. Over 500 classic photographs and newspaper pages make the book compellingly browsable.

What is particularly thrilling about Pictures on a Page is its demonstration of the expert editorial eye. Evans illustrates through a series of marvellous examples how selection, enlargement, cropping, arrangement alongside text and layout have bought out the drama in a news story, to the extent that the news history of our times is one that might be told more readily through images that text, because it is pictures that have captured the moment and the meaning.

Evans steers us wisely through the ethical issues and the troubled relationship between the photograph and reality. It is a book to make us realise just how selective and manufactured this thing called news really is. Yet at the same time we see how compelling the news image can be, what deep feelings it stirs within us. To make us both question and yet cherish photo-journalism is the book's great achievement.

Posted by Luke McKernan at 9:41 AM