Writing a 'mini-history' of a newspaper

While a great deal is known about a few nineteenth-century newspapers, such as the Times (1788-), the Telegraph (1855-) and the (Manchester) Guardian (1821-), there are a large number of newspapers produced during the period about which we know very little. One of the key aims of the Heritage Made Digital Newspapers project is to provide information about many of the neglected and forgotten nineteenth-century newspapers held by the British Library.

The aim is to produce a ‘mini-history’ for each of the titles being digitised as part of the project, providing bibliographic and contextual information, including details of dates, title changes, publishers, printers, proprietors and editors; size and cost; political leaning; information about content; and reference sources. For each title we are collecting the details using a template, which was designed for this project, but is already being used for wider purposes across the News collection, and which we hope may be useful to other newspaper digitisation projects. A blank copy of the template and a nearly complete template here showing details of the Lady’s Newspaper (1847-1863) are given at the end of this post.

Finding the data to populate the template can be challenging. In some cases some of this information is available in press directories of the period, starting with Mitchell's Newspaper Press Directory in 1846, though there is nothing so useful to researcher before then. Valuable information has been collected in modern  secondary sources, such as the Dictionary of Nineteenth-Century Journalism or the Waterloo Directory of English Newspapers and Periodicals:1800-1900, or in books and articles written about specific titles. Useful information has also been found by searching other newspapers on the British Newspaper Archive, by looking at Dictionary of National Biography entries, and by reading the biographies and autobiographies of those involved with specific titles or the nineteenth-century media more generally. However, in quite a few cases, there is little or no information easily available.

Below the masthead on most newspapers you can find details of the issue number, date and price of the newspaper. The Express, no. 9, 10th September 1846, p. 1.

For every title it has also been important to return to the hard-copy originals, to check details, spot-check for consistency over time, and to search for illusive pieces of information. For short runs it can be helpful to check every volume, to see if anything changed over time, while for longer run spot-checking has been used. Volumes have been measured. The front pages of each paper checked for title, price, numbering patterns, and the prevalence of adverts.

Useful sections to check for information have been the ‘Notices’ that often appear above the editorial on one of the inside pages of the newspaper, as this is usually where any details of changes to the publication appear. 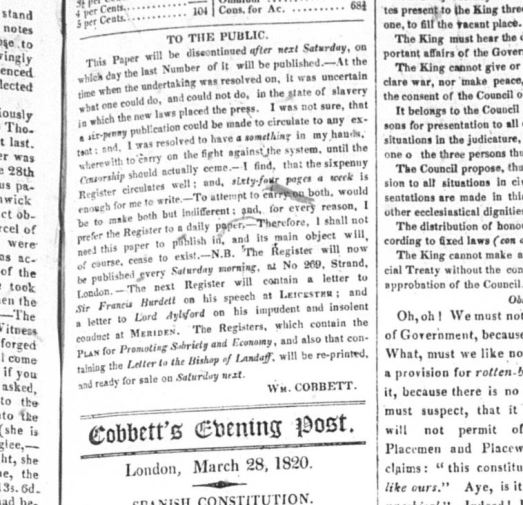 The printing and publishing information that usually appears at the bottom of the final column on the last page has also proved to be a useful place to look, as changes in production often indicated bigger changes behind the scenes.

First issues have been checked for any statements of intent, and the last several issues are looked at to see if any indication is given regarding the reason the publication ceased.

In some cases a wealth of information has been uncovered, while other publications remain shrouded in mystery. One key pieces of information that we often struggle to discover are the name(s) of the proprietor(s), which is generally less outwardly linked to a newspaper than that of the editor, the printer, or the publisher, although often only one or two people embodied all of these roles. The reason for a title discontinuing publication is also often opaque, with no mention made of an impending end, and frequently signs that such titles intended to continue, such as requests for future adverts and mentions of up-coming articles.

We hope to use these mini-histories in a variety of ways. A few have already been adapted to appear as short histories of titles on the British Newspaper Archive. We plan to make them all available on the British Library website. And we are using some of the details uncovered to enhance the entries on the British Library catalogue. We are also hoping to use the data collected to do lots of fun things, such as map networks of connected titles and people in the nineteenth-century media landscape, to show patterns of production and distribution, and to enrich our understanding of both the world of the nineteenth-century newspaper, and of the British Library collecting policies through the ages.

Posted by Luke McKernan at 4:27 PM