We hope readers will enjoy the series and seek out some of the recommendations.  The choices below have been made by Dr Nick Foggo of the University of Liverpool. 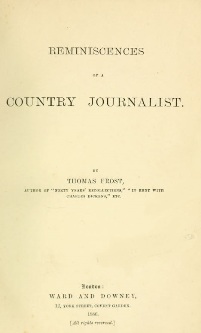 I’ve chosen to begin with what was probably the first book I read about the newspaper world. Serendipitously, it was both informative and, unlike so many Victorian memoirs, a good read. What makes this book (and my other choices) stand out is the humanity of the author, Thomas Frost (1821-1908). Dry and self-aggrandising works by distinguished proprietors and editors abound, but here we have the voice of a middling journalist, who spent =iomost of his working life trying to make ends meet. He achieved little, if anything, of lasting impact in the news business and was never a household name but it would be unfair to characterise him as a hack or penny-a-liner. He occupied the middle ground, populated by large numbers  of fallible journalists, who fed the newspapers with their staple commodity – reports of events and speeches, sometimes  filled out with leaders and commentaries. Frost worked up and down the country as employment opportunities permitted. His unwavering commitment to Chartism will not have helped his prospects for advancement when the press was dominated by Liberal and Conservative proprietors. 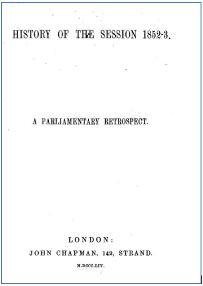 The author of this anthology of innovative parliamentary journalism, Edward Whitty (1827-1860),  was an enfant terrible of the mid-19th century, whose fervour and family misfortunes led him to an early, alcohol-fuelled death abroad. His Irish-born father, Michael James Whitty, proprietor of the Liverpool Journal, sent him to London in 1846 to learn parliamentary reporting with The Times and also write for the Journal. The young Whitty was both an Irish nationalist and a follower of his father’s patron, the parliamentary reformer Sir Joshua Walmsley. It was always likely that he would see the Imperial  Parliament through jaundiced eyes but not that he, more than anyone, would transform the traditional weekly summary into a genre of its own, which we recognise today as the parliamentary sketch. In this collection of articles from 1852-3, first published in The Leader and the Journal, Parliament, warts and all, is portrayed in graphic language, well-laced with incisive comments. ‘Nobody supposes, when Mr Disraeli suggests an argument, that he is hinting at his own convictions.’ This work made Whitty’s name and was soon followed by another anthology, The Governing Classes of Great Britain: Political Portraits (1854), which popularised the term ‘Governing Classes’, and a bitter, satirical novel Friends of Bohemia (1857), which laid into London society and his own stamping-ground. 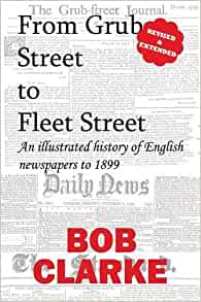 This revised paperback edition is everything public history should be: affordable, knowledgeable, informative, lavishly illustrated and inspirational. The exuberance that you only really get from a lifelong collector like Bob Clarke is readily evident. What makes this broad survey of newspapers over three centuries so appealing is that it does not take the ‘Kings and Queens’ approach to history and major on the achievements of proprietors but instead serves up a wonderful diet of newspaper content. The reader soon gets a good feel for what historic newspapers looked like and what sort of news and journalism might be found in a very broad range of titles. It is gratifying to people such as myself that provincial newspapers get a lengthy chapter of their own. The book is greatly enhanced by over 50 illustrations (most, I suspect from the author’s collection) and countless meaty quotes from papers. The central portion is a particularly enjoyable examination (with appropriate comment) of perhaps the most tasty aspects of a newspaper: the advertisements, crime reporting and wars. It’s a good way to read all about it!

Posted by Luke McKernan at 8:40 PM