We hope readers will enjoy the series and seek out some of the recommendations. The choices below have been made by Dr. Paul Gooding, Lecturer in Information Studies, University of Glasgow. 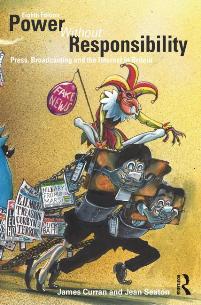 This book borrows its title from a scathing attack on the press barons Lord Beaverbrook and Lord Rothermere, by then leader of the opposition Stanley Baldwin in 1931. I think it’s fair to say that these polemical undertones permeate a book that serves two valuable purposes. First, it provides a wide-ranging history of the press and broadcasting in Britain from around 1800 to the present day. Second, it provides a series of proposals for the reform of the contemporary institutions of the press. The value of these complementary parts is underlined by the fact that the book is now in its eighth edition and translated into several languages.

That said, the part that still chimes with me is the way that Curran and Seaton force us to reconsider not just the institutions of the press since the digital turn, but our own thinking around the underlying technologies. Vincent Mosco described technologies as entering a state of “powerful banality” – here, the authors describe the awe-struck state that is expressed by our continuing capitalisation of the Internet, and the impact that this wonderment has upon our ability to effectively critique its related institutions and technologies. 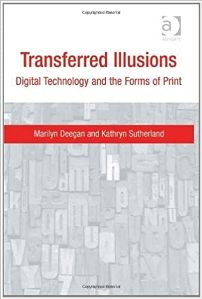 Deegan and Sutherland write at length about the pasts, present and future of historical newspapers, but in reality the scope of the book is much broader. It explores the forms and institutions of print, and it spans newspapers, books, publishers and libraries. Each of these is considered through the lens of large-scale digitisation of library collections, allowing the authors to explore how digital remediation redefines our interaction with the diverse forms of print.

What really stood out for me is that this is a book written by, and for, scholars and practitioners of information, and the links it draws between the material history of forms such as historical newspapers and the curatorial decision involved in contemporary digitisation practice. It recognises the way that digitisation recovers the textual legacy of materials such as historical newspapers, while also providing an account of the ways in which the resultant digital facsimiles reformulate those texts. In short; come for the chapters on the nineteenth century press, stay for the interventions into digitisation theory and practice. 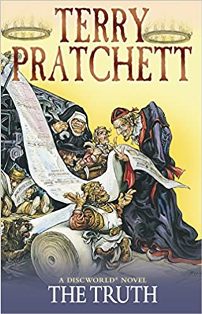 I’m generally of the view that most lists of book recommendations can be improved with a liberal dose of Terry Pratchett, and the world of newspapers is no different. The Truth tells the story of William de Worde, a professional scribe and exiled son of nobility, who inadvertently creates and becomes the editor of the Ankh Morpork Times, the first newspaper in the Discworld’s history. It’s a tale of investigative journalism in the highest echelons of society, of the challenges of speaking truth to power, and of a vampire photographer who turns to dust whenever he uses the flash.

Pratchett’s books became increasingly satirical throughout his career, using fantasy to shine a light on the social and political hierarchies of our world. The Truth explores the challenges posed by those who try to hold the powerful to account, in the face of a printing press characterised as a beast that is constantly, terrifyingly hungry for words. Pratchett’s understanding of the human condition means that so much of his writing remains relevant: right now, as we process the impact of the Covid-19 pandemic on our lives, the misspelt motto of the Ankh Morpork Times is particularly pertinent: “The Truth Shall Make Ye Fret.”

Posted by Luke McKernan at 7:11 PM