The news from Leeds

Announced as it was in the middle of March of this year, it is possible that not all may have read of the British Library's ambitions to extend its operations in some form through a new public space in Leeds. The government has made a £25 million commitment, as part of the West Yorkshire Devolution deal, to establish a British Library North in Leeds City Centre. Exploratory discussions are underway between Leeds City Council and the British Library and property developer CEG about the Grade 1 listed Temple Works site over the potential for its occupancy by the British Library. 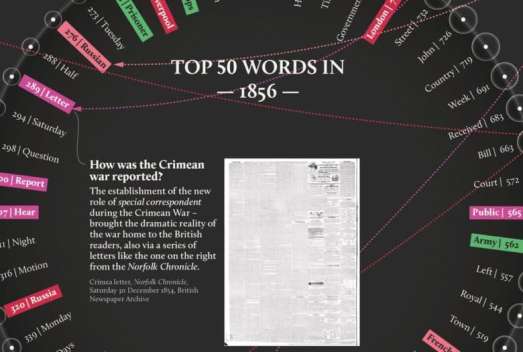 From a Tiziana Alocci infographic on the Crimean War

As part of this process, we have been working with various Leeds organisations and group to explore shared interests through a programme of public events. One of these, the Leeds Digital Festival, takes place 21 September-2 October, and features two events (among 294) that feature the British Library news collections. As we digitise more and more of our news collections, and as research applications of a digital news library continue to develop and challenge us, we are pleased to be able to showcase two particularly interesting events that emphasise creativity and new thinking.

As part of the Heritage Made Digital newspapers project, where we are digitising poor condition out-of-copyright newspapers, we are keen to share in imaginative ways of extracting and re-using the data. For this events we have been working with artists Tom Schofield, Sam Skinner and Nathan Jones from Torque Editions, who are using artificial intelligence and speed reading technology to explore aspects of our nineteenth-century newspaper collections, focussing on headlines and story titles. This event will discuss how new discoveries can be made about human-computer reading capacity and media flows by applying artistic and ‘hacker’ techniques to historical data.

In May 2021 the British Library will be hosting a small exhibition on infographics on nineteenth-century themes, created out of newspaper data and other datasets. We have worked with three designers on this projectors, one of whom, the award-winning information designer Tiziana Alocci with host this workshops, together with the British Library's Lead Curator, News, Luke McKernan, Alocci will lead attendees through a hands on, practical workshop in the creative process behind effective data visualisation, exploring best practices in the industry and how to make such work stand out. This project reflects our great interest in showing how historical news resources can be illuminated through current  news applications, and in demonstrating creative applications of news data.

The Leeds development is one part of still larger plans to transform the British Library's existing site in the north of England, at Boston Spa in Yorkshire. Thanks to the Chancellor’s commitment, announced in the March budget, to invest up to £95 million, we will be able to renew and develop our Boston Spa site for the 21st century, securing its ability to store and make available our ever-growing national collection for generations to come. It is at Boston Spa that the majority of the nation's newspaper collection is held, in the National Newspaper Building.

Creating Captivating Data Visualisations has sold out already, but tickets are still available for AI and the Headline Archive, which is a free event. Do join us if you can, as we explore how today's technologies can make yesterday's news speak to us in new and exciting ways.

Posted by Luke McKernan at 4:34 PM