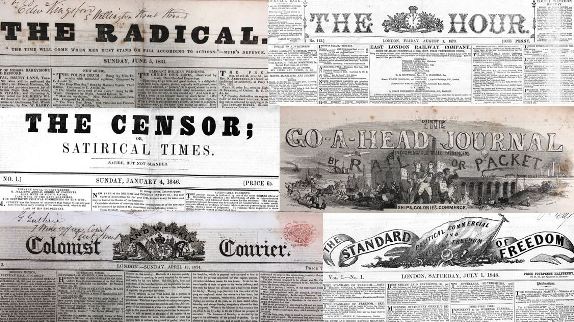 The theme is entitled Short-lived Newspapers: Reassessing Success and Failure in the 19th Century Press, and the studentship will focus on a significant but largely neglected part of nineteenth-century British newspaper history - the newspaper that did not last very long. History tends to be written by the winners, and newspaper history tends to focus on those newspaper that lasted for a good period of time and had a significant. This in tur influences decisions on what gets studied, digitised and made most readily available.

At times as much as half of British newspaper titles 1800-1900 lasted for less than five years, and they weren't all 'failures'. Some covered niche topics and were not intended to last long; some were part of a particular business strategy in which a publisher might produce several titles and see which one succeeded; some merged with other titles; some are just mysteries. Even when they were judged failures, that is interesting, because no newspaper ever set out  with the expectation of failing. The failures look so much like the successes, bar their duration. Whatever the reasons, this is a history ripe for investigation.

The project will have at its core around 200 newspaper titles that we have been digitising as part of the British  Library's Heritage Made Digital programme. It will be jointly supervised by Dr Bob Nicholson and Dr Andrew McInnes at Edge Hill University and by Dr Luke McKernan and Dr Elizabeth Gaskell at the British Library.  The student will spend time with both Edge Hill University and the British Library, where there will be the opportunity to gain a deep knowledge of the Library's newspaper collections, both their physical care and digitisation procedures.

Information on the project and an application form can be found on the Edge Hill University site. The deadline for applications is 1 June 2021 at 13:00.

Posted by Luke McKernan at 8:13 PM

The mass digitisation of historic newspapers has had a huge effect on many areas of research. Theories have been confirmed or overturned, new discoveries are made daily, evidence is available in abundance. One area in which digitised newspapers have had a marked effect is film studies. In this guest post, film and theatre historian Barry Anthony describes the use of newspapers by early film historians twenty years ago and how things have changed today. In 2009 the National Fairground and Circus Archive received an exciting donation. The George Williams collection was a hoard of fragile nitrate films dating back to the last decade of the 19th century. Several had been made for Thomas Edison’s Kinetoscope peepshow, a device that revealed 40 second motion pictures to individual customers about a year before the first projectors introduced the cinema experience to mass audiences. Some subjects had been shot at Edison’s New Jersey studio, but others were among the earliest known British films. Dating from 1895, they depicted actors dressed as a sailor and a policeman detaining a criminal; a moderately sized kangaroo sparring with a small boy; and an animal trainer presiding over a display of talented dancing dogs. They had been filmed with a camera developed by electrical engineer Robert Paul and photographic expert Birt Acres (the individual contribution made by each man remaining a source of some controversy). Given a dearth of information about this earliest period of British filmmaking it seemed unlikely that the participants in these productions, particularly the cavorting canines, would ever be identified.

Eight years later, in The Kinetoscope; a British History, the late Dr Richard Brown and myself told, for the first time, the story of the device’s exploitation in the UK. It was a detailed account which would not have been possible without the research possibilities made available by the British Newspaper Archive. Back in 1999 we had produced A Victorian Film Enterprise a thorough examination of the massively financed and highly prestigious British Mutoscope and Biograph Company. In the time before the digitisation of newspapers and other archival material, much of the research required for the book entailed numerous visits to newspaper archives. Countless hours were spent poring over the contents of dusty bound volumes or straining our eyes in front of flickering microfilm reader screens. It was a process analogous to mining, tunnelling onward through page after page in the hope of unearthing nuggets of relevant material.

Richard and I were both experienced researchers and had a few short cuts which we could employ. But this in itself was problematical. The book aimed to place British Biograph in a broad historical context, looking at the economic, social, and aesthetic aspects of its development and exploitation. In concentrating our searches on periodicals dedicated to entertainment (itself a massive task) we located much detail about the company but missed a wider and more diffuse range of comments in other publications. Our attempts to cope with these tangential areas were of necessity far more selective. A case in point concerned the company’s peepshow machine. Whilst Biograph films shown to audiences at music halls and other venues were usually impressive views of news events or foreign scenery, the Mutoscope viewer lived up to its ‘What the Butler Saw’ nickname by offering sexually titillating material. Across the country there were howls of indignation as hundreds of cast-iron mutoscopes were installed in arcades, railway stations, shops, and seaside promenades. Such scandalised protests were, of course, recorded by provincial newspapers with the details of offending subjects carefully noted. Faced with reports scattered across many local publications it became extremely difficult to locate sufficient material to be able to accurately assess the scope of public concern about an important feature of British Biograph’s exhibition policy. Had we possessed the online search facility later provided by BNA, merely entering the titles ‘Why Marie Blew Out the Light’ or ‘Should Ladies Wear Bloomers?’ would have provided a universal view of the controversy. 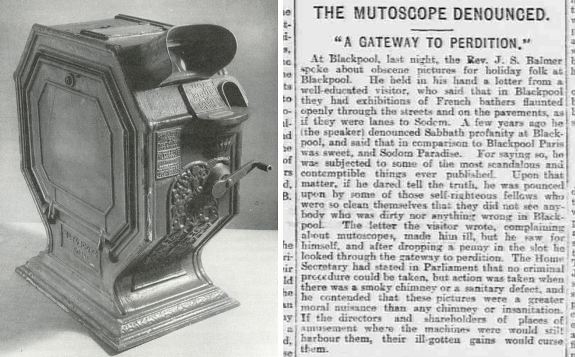 A mutoscope and a denunciation from the Sheffield Evening Telegraph, 16 August 1899

To assemble a chronology of Biograph exhibitions outside London, we were fortunate that entertainment periodicals such as The Era, The Music Hall and Theatre Review, and The Stage usually listed the content of music-hall shows throughout the UK. It took weeks to search a six-year period, leaving us with an end result that was extensive, but not exhaustive. A similar chronology of exhibitions in The Kinetoscope was more complex because, unlike the Biograph projector, the device was not owned by a single company. Despite the involvement of many showmen often pursuing diverse exhibition practices, the Kinetoscope listing proved easier to assemble. The simple process of searching ‘Kinetoscope’ (and other spelling variants) on the BNA resulted in a virtually day-by-day record of exhibitions during the period 1894-1895. For the first time it was possible to establish that a large part of the population had its first exposure to motion pictures months before the introduction of projected films. Reviews and advertisements in local newspapers enabled several previously unknown exhibitors to be identified by name and their progress around the UK traced. Venues ranging from rowdy country fairs to genteel church bazaars were established; together with numbers of machines employed, durations of stay and prices charged. By following up on the further keywords revealed, it quickly became possible to present a rounded picture of a previously unrevealed (and largely unexpected) chapter of British entertainment history.

An analysis of the films mentioned in newspaper reports show that the overwhelming majority were American subjects issued by Edison. The limited number of films that were produced by Acres and Paul during their brief, bitter association (about 20 subjects) was reflected by very few references in the press. Some titles are known by a series of adverts that Paul (without crediting Acres) placed in The Era in April and May 1895 ‒ Oxford and Cambridge Boat Race, Pickpocket Arrest, Railway Station Scene, Bootblack Scene and others described only as by ‘Sundry Performers’. Returning to the films donated to the National Fairground and Circus Archive, it was possible to recognise Pickpocket Arrest from the Era adverts. The lively contest between boy and marsupial could also be identified from another 1895 advert, The Boxing Kangaroo published in The English Mechanic (a periodical sadly not yet digitised by BNA). But those dancing dogs were elusive, with no references found in 1895 although the nature of the film clearly indicated that it was a product of the Acres/Paul association. The challenge of finding out more about the film took on a disproportionate importance, a test of our own research capabilities and the comprehensiveness of original sources. We examined accounts of various troupes of performing dogs (amazingly popular in the 1890s); looked at circuses appearing in the London area; and, of course, scrutinised the BNA for any possible clues. Eventually we hit our publication deadline and our search was abandoned.

Report from the Wharfdale and Airedale Observer for 10 January 1896, and a Kinetoscope

Following Richard’s death in 2020 I decided to resume the hunt. Altering the BNA search parameters very slightly, things suddenly became clear. In a description of a New Year Conversazione held at Saltaire in West Yorkshire, the Wharfdale and Airedale Observer for 10 January 1896 reported that ‘the Kinetoscopes give excellent illustrations of last year’s Derby race, a performance by Lorenzo’s skipping dogs (recently exhibited at the Royal Aquarium, London, where the photograph was taken), etc.’ A further search soon revealed that ‘Professor’ Lorenzo was a noted trainer whose troupe consisted of dogs, ‘Educated’ ponies, goats, and monkeys. One of his top turns was a boxing kangaroo who fought against a boy billed as ‘Young England’. It was an inconsequential discovery, but one which demonstrated the scope and potential of the BNA. We had gone from building a detailed, multi-layered picture of the earliest years of moving pictures to revealing a single music-hall act that had played a minor part in their development. Identifying an entertainment industry in the making or a group of dancing (or skipping) dogs – all had become one.

Barry Anthony is the co-author (with Richard Brown) of A Victorian Film Enterprise: The History of the British Mutoscope and Biograph Company, 1897-1915 (1999) and The Kinetoscope: A British History (2017). His other works include The King's Jester: The Life of Dan Leno, Victorian Comic Genius (2010); Chaplin's Music Hall: The Chaplins and their Circle in the Limelight (2012) and Murder, Mayhem and Music Hall: The Dark Side of Victorian London (2015). There is information on the George Williams Collection at the National Fairground and Circus Archive at https://www.sheffield.ac.uk/nfca/collections/georgewilliams.