We are very pleased to be able to announce that the British Library and family history website Findmypast have extended their partnership operation of the British Newspaper Archive. 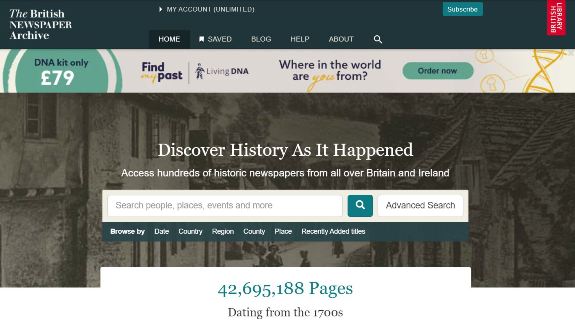 The BNA was originally launched in 2011, with the aim of digitising newspapers from the British Library's collection, making these available  on the website, and delivering a digital preservation copy back to the British Library. An ambitious goal of 40 million pages was set for the ten-year arrangement, one which has now been reached.

The archive features four centuries of newspapers (currently 1699-2009), regional, national and international, digitised from both print and microfilm holdings. The advantage of the digital archive is not just the increase in access, but the long-term protection it guarantees for the fragile print newspapers themselves, as the handling of them becomes greatly reduced.

The BNA is aimed primarily at family history researchers, to whom it has been of huge benefit, but it has also attracted many academic researchers, becoming an essential reference source for almost any modern history topic. The regular flow of new content (currently around 400,000 pages are added to the site every month), makes the return visit essential, whatever your discipline. If the answer is not there today, it could well be tomorrow.

The extension of the partnership will mean a further fourteen million pages will be added to the BNA over the next three years. The BNA is a subscription site, but also promised is that one million pages to be made free-to-access each year. The launch date for this development can't be announced as yet, nor the titles that will feature, but they will all be out-of-copyright and therefore from the late nineteenth century and earlier. We are expecting this to have a major effect on how our digitised newspapers are used, and who uses them.

This free offer comes from plans being developed at the British Library to open up our news collections where we can. Complementing the free access to selected newspapers on the BNA will be open datasets on our Research Repository, presenting the digitised texts alone in a form that will benefit the new generation of researchers interested in 'big data', enabling them to seek new answers to old questions, and to tackle new questions that we had not been able to ask before now.

Much has changed in the world of newspaper research over the past ten years. There will all the more change in the next three years, as digitisation continues to have an immense impact on how we care for, present, and understand our historical news archives.