Breaking the News is our new exhibition looking at 500 years of published news in this country. It is about what has been news to us, why it has been important, what has changed over this five centuries, and what has remained the same. It is an exhibition about the stories that have shaped us. Its overall message is that news matters. 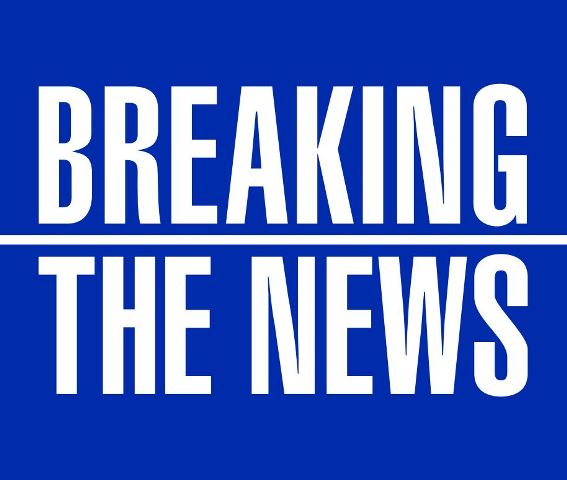 Of course news has been around for more than five hundred years. News is as old as society. When the people in one cave learned that those in the cave next door has discovered fire, that was news. The crucial element is publication, where someone has collected that news and presented it in a form that we the readers, the listeners and the viewers, will accept as news.

News is a contract between those who gather it and those who consume it. It is that contract, that tension between them and us, that is the subject of our exhibition.

The exhibition’s focus is on British news, or rather what the British have understood as news. To have produced an exhibition on news across the world would have been too much, and not so instructive. News is not only as old as society, but is determined by society. What is news to one group of people may not be news to another, though their perception of what is news to them is always going to be changing. News can only be understood through its audience, and for our exhibition that audience is the British.

The exhibition does not trace the history of published news in this country chronologically. It is a thematic exhibition in which objects from different time periods and on different formats are brought together to show how various our news has been, and yet how common our news interests have remained. We have newspapers and news websites, broadsides and newsreels, tweets and television programmes, headlines and hashtags.

There are around 100 objects in the exhibition, but it is better to think of them as 100 stories – stories that have made up our news over five centuries. Stories are what draw us to the news, and which make up our news publications. Here are five of them, with the headline titles that accompany them in the exhibition:

Victory for the English Army 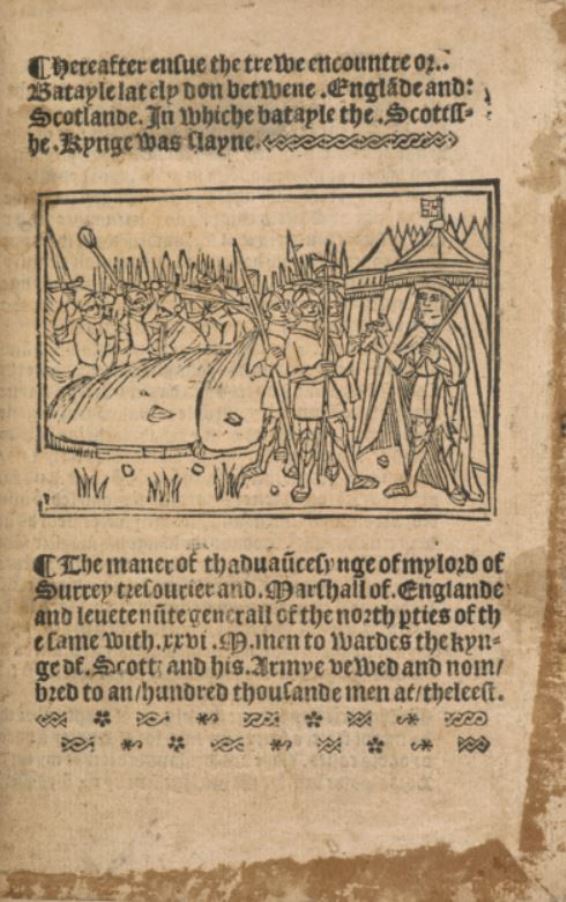 Battle of Flodden news pamphlet from 1513

Breaking the News traces the news in this country since the publication of this pamphlet reporting on the outcome of the Battle of Flodden, fought between the English and Scottish armies in 1513.  It is the earliest surviving example of a news publication in this country.

The English army was victorious, and King James IV of Scotland was killed. The pamphlet gives a full and graphic account of the course of the battle. It is compelling newsy, with its strong headline, vivid illustration, on-the-spot reportage and fact-filled information. It is news as we understand it, composed in an event’s immediate aftermath, designed for quick distribution for those who needed to know what had happened.

Who those readers were cannot be said for certain, but such a pamphlet was a means of circulating information far beyond the English court. Those in the upper echelons of society had messengers who would deliver manuscript newsletters to them. Everybody else, however, would have made do with word of mouth or cheap, printed news pamphlets like this. One way or another, news spreads. From 1712 to 1855, the British government imposed a high tax on newspapers through the Stamp Act to control the press. Effectively the intention was to restrict news to those who could afford it, who were the ruling elite.

Berthold’s Political Handkerchief, created by political writer Henry Berthold and published in 1831, urged revolt against national debt and the government. It was printed on cloth, a cheeky attempt to avoid the tax and escape censorship by claiming it did not qualify as a paper.

The authorities were not persuaded by Berthold’s ruse and the newspaper only ran for a few issues. But ‘unstamped’ newspapers, as they became known, continued to refuse to pay the tax and defy attempts to suppress working class access to news. 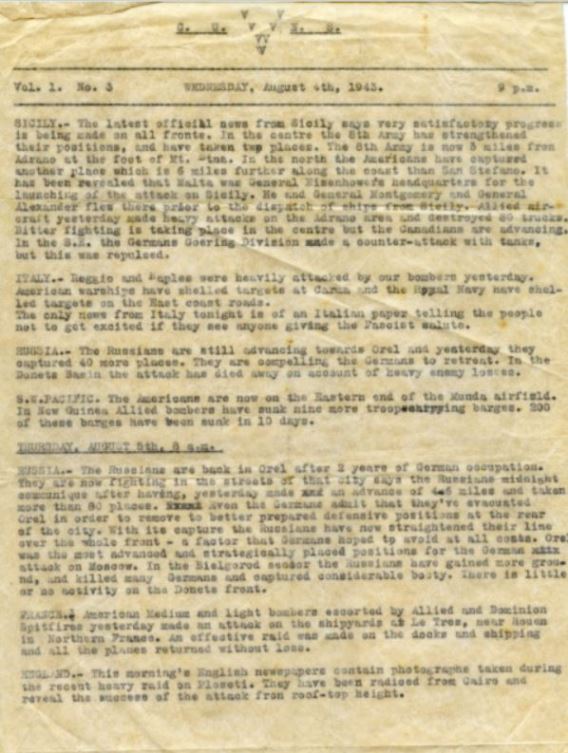 There are few more powerful expressions of the desire for a free press than Guernsey Underground News Service (GUNS). The Channel Islands were the only part of the British Isles occupied by Germany during the Second World War. One of the Germans’ first actions after the invasion was to seize control of the local press, but this only triggered local underground news services, of which the most celebrated is GUNS.

GUNS published transcripts of BBC news broadcasts obtained in secret (radio sets were banned in occupied Guernsey), printed on tomato-packing paper. The newssheet was produced between 1942 and 1944 at great personal risk. Five islanders were sent to prisons in Germany for distributing the paper, where two died.

That some have given up their lives to report the truth shows how deeply the need for a trustworthy and truthful news lies within us. 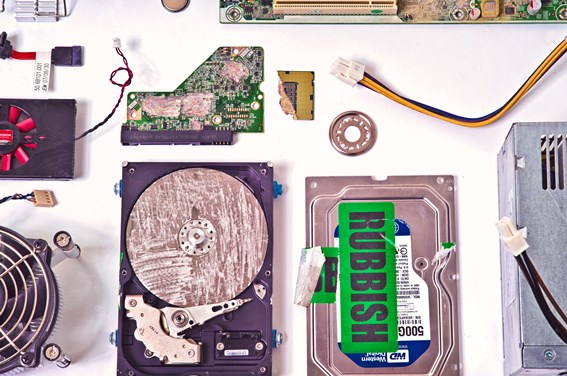 The dividing line between what is in the public interest and what is of interest to the public has been long argued over. In 2013, American National Security Agency contractor Edward Snowden leaked classified information to journalists. The resulting stories alerted the world to civilian surveillance and breaches of privacy by the US and its allies. It was also argued that it impeded defence operations and put lives at risk.

This computer was one of those used by The Guardian newspaper to store the leaked material. It was destroyed by Guardian staff, under the supervision of British security services. It was a purely symbolic act, however. The data had already been shared. 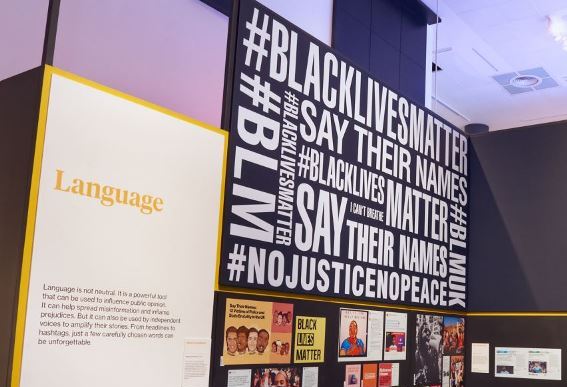 #BlackLivesMatter display from the Breaking the News exhibition

One part of the exhibition focusses on the power of language, as wielded by the news. Language is never neutral, and words of a news headline can powerful sway opinion. But who do we mean by ‘the news’? In a digital world, anyone can contribute to what the news might mean, if they get their language right.

There may be no more powerful tool in today’s news world than the hashtag. A carefully chosen hashtag can encapsulate a strong message, link posts on a topic together, and amplify content across social media. #BlackLivesMatter, both a phrase and a movement, formed in 2013. For the exhibition we have created a striking display of images used in Instagram and Twitter posts that used hashtag to put the injustices experienced by Black British people often ignored by mainstream media back into the news.

It asks the question, who makes the news? And the answer may be – us.

We hope that you will be able to visit the exhibition, which runs until 21 August 21, if not in London then at one of over 30 pop-up displays at public libraries across the UK, via the Living Knowledge Network. There is an accompanying programme of events at the Library and online, and the exhibition book, Breaking the News: 500 Years of News in Britain, edited by Jackie Harrison and Luke McKernan.

Posted by Luke McKernan at 3:30 PM