One of the special features of the British Library’s Breaking the News exhibition is a large-scale panorama, created by designers Northover&Brown. Objects and graphics have been placed into flowing pictures of networks, places and people, tracing the changing ways in which we have discovered the news over five centuries, from town squares to what Elon Musk calls ‘the digital town square’. This post complements the panorama. 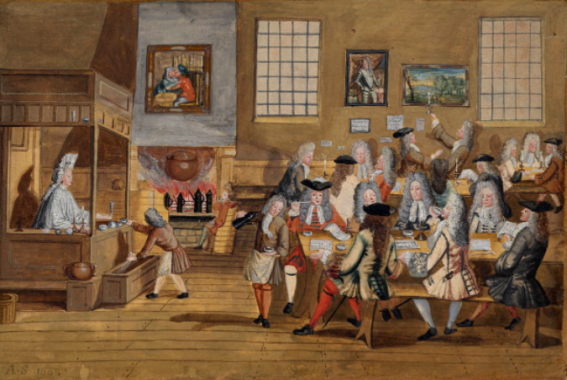 Thence to the Coffee-house … where all the newes is of the Dutch being gone out, and of the plague growing upon us in this towne; and of remedies against it: some saying one thing, some another.

On 24 May 1665 Samuel Pepys wrote in his diary of his quest for news. Pepys visited one of London coffee houses two or three times a week over 1663-1664, the habit falling away in 1665 as plague took its grip on the city. He seems not to have cared that much for coffee, but yearned for the companionship, good business contacts and information to be found at a coffee house. Here one discovered the world.

The news one gleaned from a 1660s London coffee house came as much from discussion and talks as it did from printed news. Coffee houses had long tables on which the latest newsbooks and newsletters would be laid out. In 1665 there were only two print newsbooks available (from one publisher), both mostly restricted to overseas news: The Intelligencer and The Newes. The news Pepys discovered was an amalgam of publication, rumour and opinion. Such it was then; such it has remained.

The news has to seek us out. Just as much as it is shaped by those who are able to publish it and those who choose to consume it, news is shaped by where it is found. News publications in Britain in the seventeenth-century were found in print shops, coffee houses, taverns, and in the homes of those in business, officialdom and the church served by private news services that provided handwritten newsletters. Tight publication regulations prevented coverage of anything except overseas events, but the Civil War (1642-1651) created an audience hungry for information and opinion. Mostly confined to London, it was circulated, at some risk to publishers and sellers, as newsbooks, newsletters and proto-newspapers, news from the streets that was sold on the streets.

In the eighteenth and early nineteenth centuries newspapers gradually grew in numbers, geographical range, and habit. News was carried across the country by mail coaches along ever-improving roads to homes and public spaces such as taverns and workplaces. Copies passed from hand to many other hands. Such news could be shared verbally, reaching out to the illiterate or those priced out of purchasing a newspaper by taxes designed to suppress radical thought. Working class memoirist Thomas Carter recalled passing on the news in 1815:

I every morning gave them an account of what I had just been reading in the yesterday's newspaper ... My shopmates were much pleased at the extent and variety of the intelligence which I was able to give them about public affairs, and they were the more pleased because I often told them about the contents of Mr. Cobbett's "Political Register", as they were warm admirers of that clever and very intelligible writer. (T. Carter, Memoirs of a Working Man, London, 1845)

In the nineteenth century the newspaper flourished, aided by rapid growth in readers and advertising money that freed newspapers from political control. Coffee houses remained a popular location, but from the 1830s newspaper reading rooms emerged, followed later by newspaper sections of public libraries, greatly widening access to local and international affairs to those who had previously been priced out of such knowledge. The rapid spread of a rail network not only boosted the distribution of newspapers but created a new kind of space for news, the commuting space, private consumption in a public environment. Newspapers could be organised to last for the duration of a rail journey. Truly national newspaper titles came to the fore – The Times, The Morning Chronicle, The Daily Telegraph (few other countries have so dominant a national newspaper culture as the UK). Sunday titles such as The Observer and The Sunday Times fitted into the weekend pattern of lives with greater leisure time. All culminated in the great game-changer, The Daily Mail, launched in 1896, a million-seller by 1901.

In the twentieth century different news forms arose to compete for public attention in both private and public spaces. From the 1910s through to the 1960s cinemas usually featured news in their programmes, in the shape of short newsreels, with dedicated news cinemas proliferating across cities from the 1930s. Radio news started in December 1922, delivering its messages exclusively for domestic consumption, building up its reputation so that for the Second World War it was the essential means by which the general public anchored itself to the daily progression of the conflict. BBC television in the 1930s showed only cinema newsreels, introducing its own newsreel in January 1948. It introduced newsreaders in the format that endures to this day in 1955, just ahead of its new commercial rival, ITV. It proved to be the perfect domestic, communal medium, gradually supplanting radio, pressurising the newspapers and crushing cinema newsreels, which could not compete with so frequent a service.

Newspapers were still read on trains and in libraries, but the contest for news supremacy lay in the domestic space. News was something that came to us, that occupied our homes. It tied us constantly to the turn of events happening outside our protective four walls. Local radio and television arose, following newspapers in serving audiences who understood themselves as much regionally as nationally.

The multi-format, domestic model began to be overturned at the turn of the century. The Internet has become a platform for all established news media (press, television, radio) and has led to the creation of new news media forms. Social media combines personal and general information, serves as a distribution platform for stories from the other news media while delivering original content as well, and supplies content on which all news media now depend.

The Internet has not only broken up traditional news forms, but has changed the relationship between news and space. The news no longer needs to seek us out: it is everywhere. Amy, aged 25-30, in a 2019 Reuters Institute for the Study of Journalism report on news habits of the young, describes how she occupies this world: 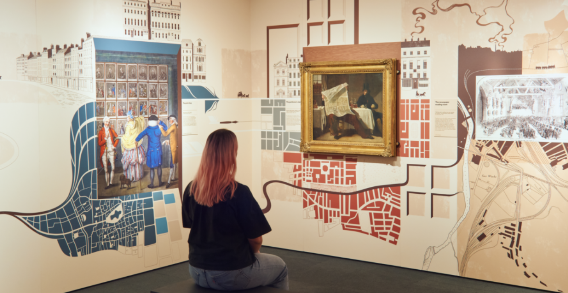 Part of the ‘Where do we find the news?’ panorama, Breaking the News exhibition, British Library

For 400 years, since the publication of the first newspaper in Britain, the established news media have been defined by regularity. As C. John Sommerville argues, they built an economic model around news as something shaped in a particular form, forever replaced by new content, an idea of news that fed off assured spaces and a regularity of habit. Pepys went to the coffee house when his morning’s office work was done. Newspapers arrived when the mail coach was due, or were read on the daily train commute, or were delivered to the doorstep each day. They called themselves dailies or weeklies, naming themselves after their dependability. News reading rooms were open for when workers had leisure time, a weekly luxury. Newsreels were released twice a week because, in its heyday, that was how often the average person went to the cinema. Radio news established itself around daily bulletins – the six o’clock news, the nine o’clock news. Television followed the same model until it devised 24-hour news, though even that was built around regularity, with headlines on the hour. News has been defined by, indeed has helped shape, the daily round.

The Internet knows no regularity and demands no physical space. It ignores all confines (at least in those societies that permit such freedoms). The Internet is therefore changing the news. We still measure our time in days, but the network through which we communicate across the globe does not. Many, of course, still cling to the daily newspaper, or to the early evening TV news, or a radio report at midnight, signing things off for another day – but these are habits, no longer certainties. What once could be defined by a physical space must now be defined by its absence. The news today is determined not by where we are but by who we are, or who we want to be. This is the unsettling, but exciting, world of news that the twenty-first century is now delivering to us.

Posted by Luke McKernan at 5:41 PM