Spotted: A flying serpent and a record-breaking Trump

During his inauguration in 2016, Donald Trump claimed to have been met by ‘record’ crowds after his successful campaign to become President of the United States. But what does this have in common with the appearance of a flying serpent in the 17th century?

They are both – as Trump’s Campaign Strategist would deem – ‘alternative facts’. 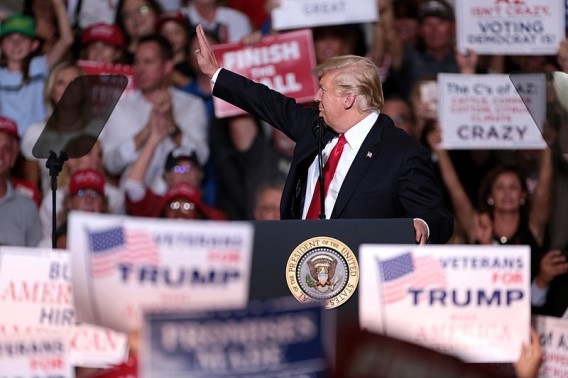 It is easy – reassuring, even – to trust and consume news that supports our existing worldview. However, without challenge or counter-balance, we can end up in a news bubble where opinion and rhetoric that we agree with can be mistaken for, or ignored in favour or, objective facts.

‘Alternative facts’, fake news and conspiracy have been published as news for centuries, but are becoming more threatening to mainstream news and the public in today’s online algorithm-led world.

Donald Trump became President of the United States in 2016 in what was a victory for right-wing politics in America. Trump and his staff claimed, contrary to the visible evidence, that his presidential inauguration attracted the largest crowd ever. In his first press briefing, Sean Spicer accused journalists of ‘deliberately false reporting’, claiming that the mainstream media was purposefully underestimating the crowd and that the ceremony had drawn ‘the largest audience to ever witness an inauguration’. Later, Trump’s Campaign Strategist Kellyanne Conway defended these claims, describing them as ‘alternative facts’.

On display in the Breaking the News exhibition is a photograph taken by Lucas Jackson that demonstrates the small turn-out at Trump’s inauguration in comparison to Barack Obama’s first inauguration. The contrasting photographs went viral on social media. The White House’s condemnation of mainstream journalism in favour of ‘alternative facts’ became a theme of Trump’s presidency.

So how does this relate to flying serpents?

In 1669, a dragon was spotted in Essex. Witnessed by ‘many credible persons’, the locals attempted to kill the dragon several times but it survived. The dragon spent its time lounging in rivers, sunning itself on hills and attacking cattle. 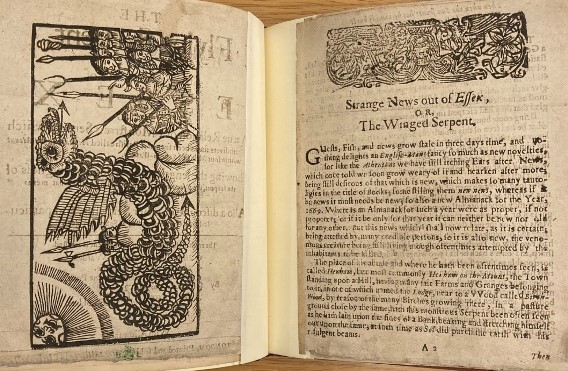 Well, at least this is what an anonymous news pamphlet claims.

The Flying Serpent, or, Strange News out of Essex is the sole surviving account of this so-called flying serpent. The pamphlet begins with “Guests, fish, and news grow stale in three days’ time, and nothing delights an English-mans fancy so much as new novelties”. This London printer transformed a fantastical tale into news – turning alternative facts into objective facts. Reports of wonders and other phenomena were ten-a-penny in early modern England, and pamphlet-writers distorted ordinary things into ‘strange news’ to capitalise on the public’s gullibility for these ‘alternative facts’. Was there really a flying serpent living in Essex? Likely not, but that didn’t stop people believing it at the time.

This wondrous story inspired Sarah Perry’s bestselling novel The Essex Serpent. The TV adaptation premieres on 13 May on Apple TV.

Alternative facts can be much more dangerous than this; people’s tendency to consume news that confirms rather than challenges their own beliefs can lead to the spread of disinformation and conspiracy in extreme cases.

In 1903, a notorious anti-Semitic conspiracy entered circulation that some neo-fascist and anti-Semitic circles still believe and perpetuate today. Protocols of the Learned Elders of Zion, 1920 (public domain via Wikimedia Commons)

The Protocols of the Elders of Zion is an anonymous forgery that was passed off as a Jewish plan for global domination. Much of its content reaffirmed anti-Semitic notions that have existed for centuries; the Protocols falsely claimed that Jews wanted to take over the world, control the press and have Jewish bankers control the world’s economies. The forgery was first published as fact in a Russian newspaper in 1903 and, by the 1920s, it had been translated into multiple languages and reprinted in newspapers across the globe.

The Times denounced the Protocols as fake news in 1921 by proving that they were a forgery, but the damage had already been done. Amidst a pervasive climate of anti-Semitism, many continued to believe that the Protocols were true. They became common knowledge due to their widespread circulation in the international mainstream press. In the 1930s and 40s, they became integral to the Nazi propaganda effort surrounding their persecution of the Jews. The Protocols still gain traction today on social media and extremist websites. They are an example of when the line between conspiracy and mainstream media becomes dangerously blurred.

‘Alternative facts’ is a contemporary phrase but fake news and conspiracy news have always existed on the fringes of the mainstream media. The news can never be completely objective. News will always be shaped, to a certain extent, by opinion and beliefs but these stories show what happens when the balance tips dangerously in their favour.

These stories are explored in the Breaking the News exhibition, open until 21 August 2022. Plus there are smaller localised versions of the exhibition touring libraries across the UK.

We are also hosting a diverse programme of events at the Library and online, and an accompanying exhibition book: Breaking the News: 500 Years of News in Britain.