The woman who gave birth to rabbits

A sensation hit the headlines in 1726. Mary Toft, a working-class woman from Godalming, Surrey, gave birth to rabbits. Dubbed the ‘rabbit woman’, she hoodwinked the entire nation, including some of the most lauded medical professionals.

The news travelled fast with newspapers across the country covering the story. In our Breaking the News exhibition, you can read about Mary Toft in one of the earliest newspapers printed in Exeter, Devon.

As an early example of evidently fake news, we have to ask why did people believe her? 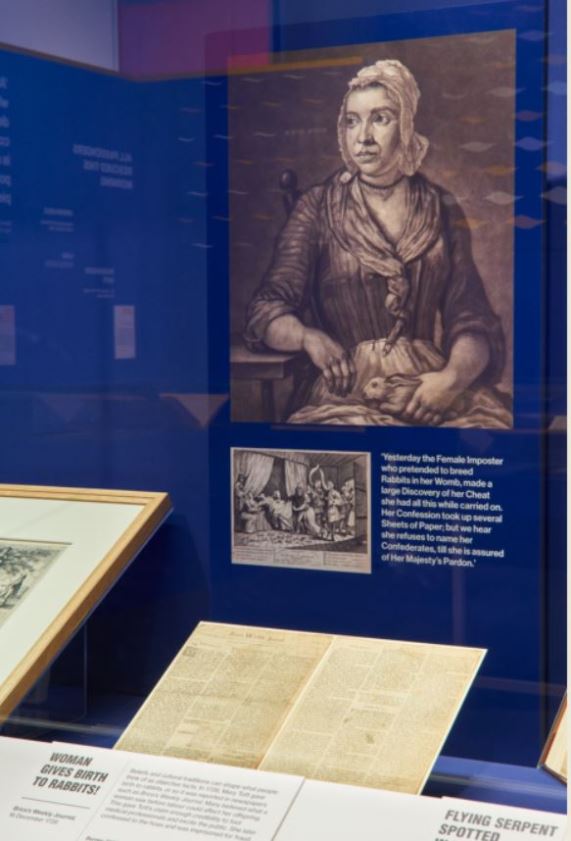 Mary Toft exhibit at the Breaking the News exhibition

Toft claimed that she had become obsessed with rabbits before going into labour. It was a popular belief at the time that, in a theory known as maternal imagination, what a woman saw and did whilst pregnant affected her offspring. This, along with her acting skills, gave Toft just enough credibility to fool the experts and excite the public.

She couldn’t maintain the hoax forever. The same press that had covered Toft’s story so gleefully derided her when, after she had been taken to London for further investigation, she confessed. She was briefly incarcerated in Bridewell Prison and paraded in front of large crowds

Eventually Toft returned to Godalming and faded into obscurity thereafter. We do not know much about her life afterwards – only that she was briefly imprisoned for possessing stolen goods years later and the press reported her death in 1763. Detail from William Hogarth's print on Mary Toft, 'Cunicularii or the wise men of Godliman in consultation' (1726)

Magician and historian Ian Keable elaborates on Mary Toft and other amusing fake news of the past in The Hoax: The 18th Century's Most Intriguing Deceptions at the Library on Monday 23 May.

Journey back through the last 500 years and discover how truth and trust in the news has changed in Britain in our Breaking the News exhibition. Open until 21 August 2022. Members go free. Buy your tickets now: www.bl.uk/events/breaking-the-news

Posted by Luke McKernan at 1:21 PM