2022 marks a special anniversary for the Newspaper Collection at the British Library. 200 years ago, in April 1822, the British Museum’s Department of Printed Books began systematically collecting newspapers. From that foundation the Library’s newspaper collections has continued to grow, and now comprises more than 36,000 titles from the UK and overseas, or 60 million individual newspaper issues. 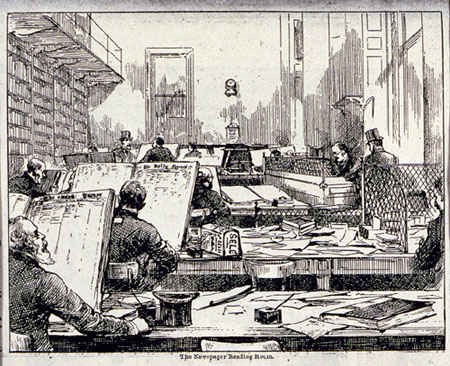 The Old Newspaper Reading Room in the British Museum, Bloomsbury. Sell's Dictionary of the World's Press 1893

Like many of the British Library’s collections, newspapers were originally part of the British Museum’s Department of Printed Books. However, from the Museum’s founding in 1753, until the 1820s, news publications were not seen as a distinct collection in their own right, and weren’t part of any concerted collecting effort. The impetus for changing this came in 1818, when a large collection of early newspapers, compiled by Dr Charles Burney (1757-1817), was purchased by the Museum. The Burney Collection of newspapers 1603-1818, when added to the Thomason Tracts (a collection of newspapers and news-books from the English Civil War period, which had been purchased for the museum by George III in 1762), formed a significant collection of early newspapers; enough for the museum to start considering the form in its own right.

In April 1822, after negotiations by Henry Baber (1775-1869), Keeper of the Printed Books, the British Museum began to collect newspapers in a systematic fashion. This was achieved via an arrangement with the Stamp Office, who at the time collected all newspapers published in Britain for purposes of registration and taxation. They kept the newspapers for two years, in case they were needed for legal cases, but agreed to pass them on to the British Museum after this period had elapsed. The first newspapers to arrive at the library were London papers for the years 1818 and 1819, and the first consignment contained sixty complete sets for these years, and twenty-one imperfect sets. Provincial newspapers were added to those deposited by the Stamp Office in 1832, and Scottish and Irish newspapers were sent from 1848. 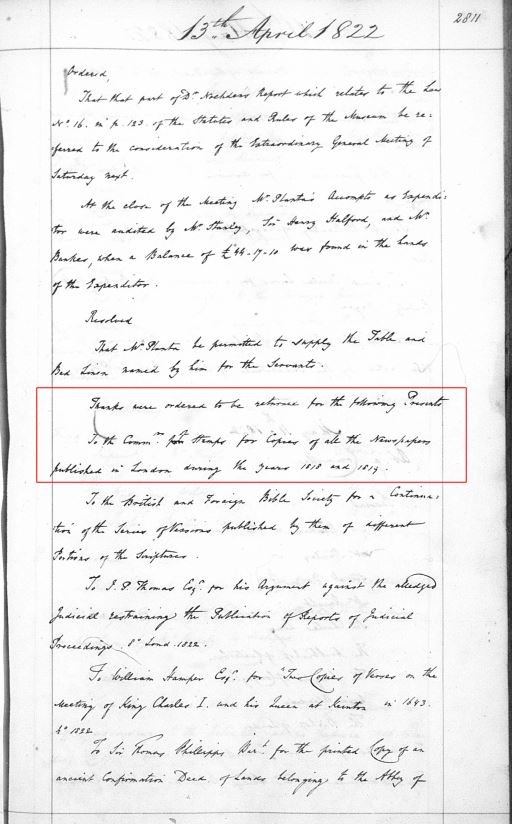 There are very few surviving records of this early arrangement between the Stamp Office and the British Museum. The image above, showing a short notice of thanks to the Stamp Office after the first consignment of newspapers arrived, which was recorded in the minutes of the Trustees Standing Committee. This is the only know record held at the British Museum/British Library, and there is no list of which newspapers arrived in that first delivery. Records for this period from the Stamp Office do not survive. Therefore, we have no certainty about which newspapers were the first actively collected by the British Library, but we can make some educated guesses. Below is an image of the front page of The World, which began publication in January 1818. This newspaper has annotations, including the publishers name and address, which were made by clerks at the Stamp Office. This indicates that it was originally the Stamp Office copy, and it was published in one of the first years deposited at the British Museum, so it is likely that this is one of the titles handed over during the first year of the arrangement. 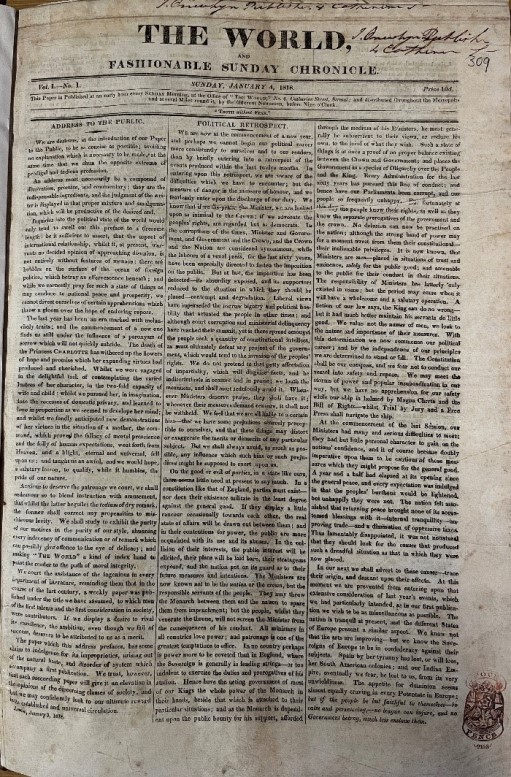 Newspapers arrived at the British Museum from the Stamp Office via this arrangement until 1869, when Legal Deposit laws were introduced. From that date onwards a copy of each newspapers produced in the country legally had to be deposited at the library by the publishers. The British Museum was now entirely responsible for its own newspaper collecting, and began building up a sizeable and (mostly) comprehensive collection of British newspapers.

The rate of newspapers publication from the late nineteenth century quickly led to storage problems for the British Museum, and from 1905 many newspapers were stored offsite at Colindale in north London. In the early 1930s this offsite newspaper storage depot was expanded, and a reading room was added, with the new Newspaper Library at Colindale opening to readers in August 1932.

In 1973 the British Library was established, and while newspapers, along with the other collections of the Department of Printed Books, were transferred to the new institution, they continued to be housed at Colindale until 2013. Newspapers then travelled up to Boston Spa, a site that had been used by the British Museum and then the British Library since 1962. A dedicated newspaper reading room was open at St Pancras in 2014, and the state of the art National Newspaper building designed especially for storing newspapers was opened in 2015.

Newspaper continue to be an important part of the British Library’s collections, with around 1,000 newspapers added to the collection each week. Alongside this, the Library now collects radio, broadcast, and internet news, creating the national news collection. Curators also continue to work to preserve and make accessible the newspapers from the Museum’s earliest days of collecting. Many of the first newspapers to arrive in 1822 have been recently digitised as part of the Heritage Made Digital project, and are now freely available to view via the British Newspaper Archive.

Posted by Luke McKernan at 4:19 PM 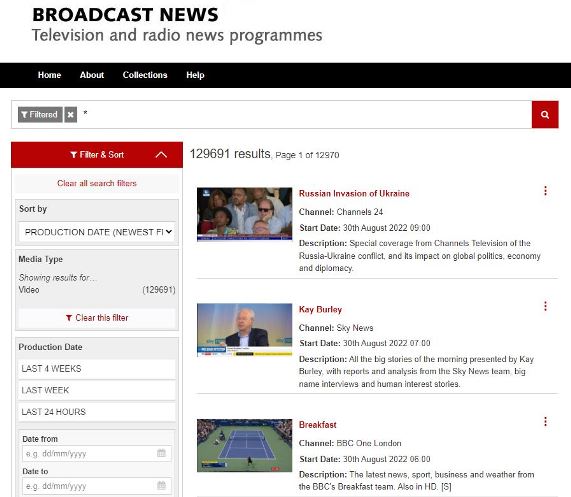 There are 114,380 programmes listed, each with record number, programme title, series title, description, publisher/broadcaster, production date and duration. It should be noted that for many of the programmes we only have a generic description (e.g. "The latest national and international news"), though there are plenty of programmes with meaningful descriptions, including some tagged under themes such as Coronavirus, Donald Trump and Ukraine Conflict. The subtitles that we capture with when we record television news programmes are not included in the list.

The channels features, with their dates of recordings held, are:

The listing is available in Excel spreadsheet down and can be downloaded under a CC0 1.0 Universal Public Domain licence. The DOI is https://doi.org/10.23636/jcbr-7v17.

This is part of our growing collection of freely-available news datasets, all available under the News Datasets section of the Research Repository. Until now, we have added on newspaper and press directory data to the Repository.In adding television, we are demonstrating the multi-media approach to our collecting of the nation's news. Radio and Web news must follow.

We hope that researchers will find interesting uses for the Television News Programme-Level List and welcome any feedback.

Posted by Luke McKernan at 4:20 PM