Today‚Äôs blog post marks the start of an eclectic A-Z of Newspapers which we hope you will find to be a stimulating if not invaluable resource. We begin with A for Advertising.

Advertising seems to be everywhere these days, and I personally cannot seem to go more than a few paces on my daily commute without coming across another advert. Whether it‚Äôs a poster, billboard, digital screen, projector, ticket barrier, or even a human with advertising strapped to their bodies or leaflets to hand out, there is an advert every couple of steps in some of our daily lives. The history of advertising is as old as newspapers themselves: Jackson‚Äôs Oxford Journal, dated 5 January 1799, features a fantastic advertisement for lozenges (amongst others) ‚Äì although whether or not the integrity of the benefits offered by the product is entirely true is up to the readers‚Äô discretion. 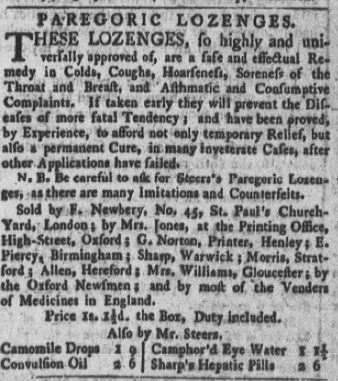 Advertising has been essential to the success of newspapers as a whole, as the payment received for adverts allows them to employ their writing staff, editors, photographers, and for the actual physical publication itself, including all of the printing costs. Investigative journalism, which can impact on a papers readership, is especially made possible by these funds. This is why many feel that print newspapers will continue for a while yet, instead of being superseded by news blogs.

These days, most advertisements in newspapers are inserted on a portion of the page, rather than taking up the entire page (although there are some full-page and double-page advert spreads). Generally speaking, these adverts blend into the background, although occasionally there are some ad placements which seem to contradict an article that lead to a fair bit of amusement. 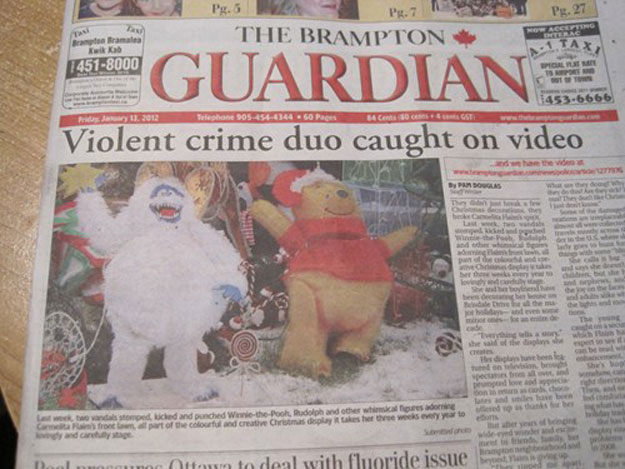 This crime duo may not be part of an advertisement but this image illustrates the inopportune layouts that some newspapers fall victim to. Image courtesy of BuzzFeed.

Advertisements today must adhere to certain regulations and are kept in line by regulatory bodies such as the Advertising Standards Agency and the Competition and Markets Authority (formerly the Office of Fair Trading). Where advertisements are found to be misleading or promotions
are falsely advertised they can be investigated and made to change their advertisements or promotions, such as certain ‚Äòfree‚Äô offers in certain national newspapers or misleading statements on products‚Äô manufacturing location.

This wasn‚Äôt always the case and untruthful, boastful, and downright ridiculous adverts used to dominate the newspapers. Here are some of the more delightful examples I have come across:

These cigarettes are 'so safe, agreeable, and beneficial, as to be patronized extensively by the Medical Faculty of Paris. [...] The Diseases in which they have been hitherto employed and found so useful are, difficulty of Breathing, tightness of the Chest, Spasmodic Asthma, Catarrhs, Hoarseness, Sore Throats, Ear-aches, Rheumatism of the Jaws, and Tooth-Ache.'

Perhaps one should consider taking this ‚Äògrand discovery‚Äô after trialling the previous cigarettes, as ‚ÄòDr. Kiesow's Elixir of Life‚Äô advertises that ‚Äòa sudden Indisposition, a disorder of the Digestion, is AT ONCE removed by A SINGLE SPOONFUL'. 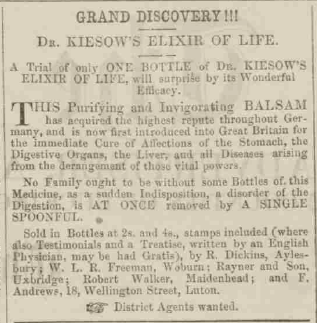 Could this be one of the first instances of modern-day ‚Äòspam‚Äô?

I guess I can skip next years‚Äô flu shot, so long as I have plenty of hot beefy ‚Äòpower‚Äô in my kitchen cupboards! 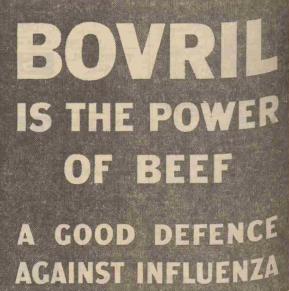 Posted by Jaimee McRoberts at 9:17 AM