In a previous blog post I wrote of an assassination attempt on Lord Lytton, Viceroy of India.  I was asked if I could find out more about George Edward Dessa (sometimes written De Sa), the would-be assassin.

Contemporary press reports follow Dessa’s arrest in December 1879, his trial in 1880, and his subsequent transfer to Bhowanipore (Bhawanipur) Lunatic Asylum, as he was deemed to be mentally ill.  Press accounts paint a picture of a confused individual who held a grudge against the Government, believing it to owe him money as compensation for wrongful imprisonment.  The language used is somewhat lurid.  George appears to have stayed at Bhowanipore as a long-term patient.  Our records show that George died there of heart failure on 8 February 1913, age 68, and was buried at the Roman Catholic Military Cemetery at Fort William, Calcutta.

Originally a private institution, Bhowanipore was managed by the Bengal Government as an asylum for Europeans and those of European descent.  A report giving a snapshot of conditions at Bhowanipore in 1887 can be found online and Annual Reports have been digitised by the National Library of Scotland. 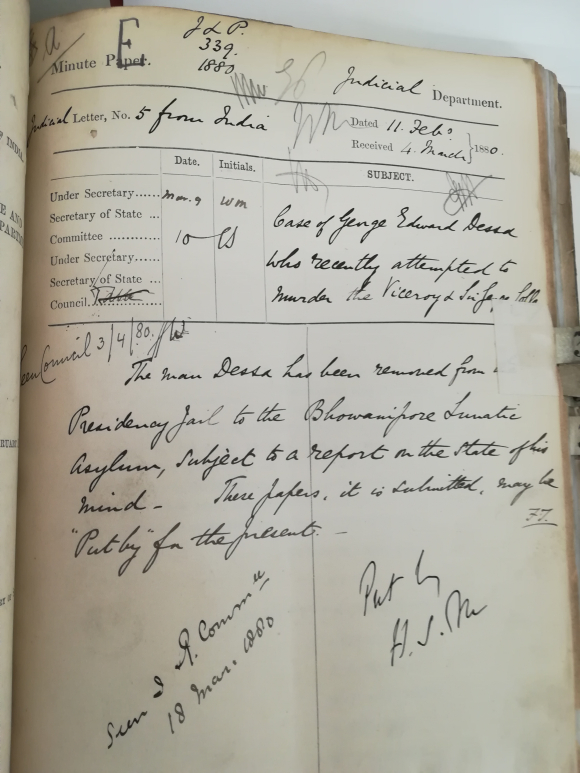 Delving deeper, there is a file on George Dessa in the Public and Judicial Department records, which includes accounts given by his father, George Henry Dessa, and his brother William David Dessa.  What emerges is a picture of a family divided and torn by long-term mental health issues.  The father recounts how his son suffered bouts of ‘insanity’ from an early age, including hallucinations and paranoia.  Attempts to secure him work, including on the East Indian Railway, had all ended in dismissal due to ‘mental unsoundness’.  George’s last job at the Preventative Service, Customs Department, ended with him threatening to shoot his supervisor.  A brief spell in the Benares Lunatic Asylum followed.  His fixation with compensation from the Government stemmed from this ‘imprisonment’.  As well as threats to harm others, George had attempted to harm himself on at least two occasions by taking large doses of opium.  George senior describes how his son was no longer able to live with him: ‘I would not let him live with me because I was afraid of him… at times he is dangerous, but has lucid intervals’.  His brother William felt no longer able to speak to him. 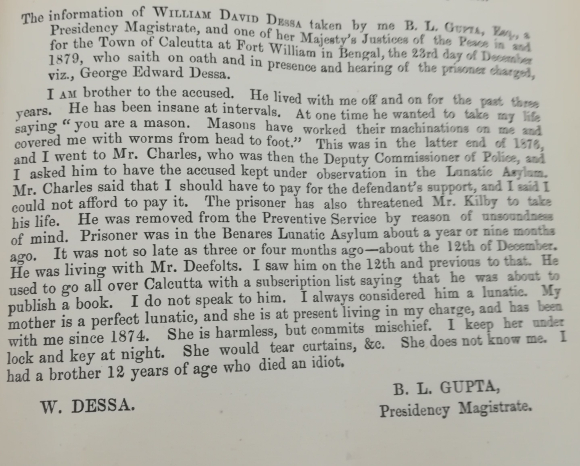 It is clear from the accounts that the family firmly believed Dessa’s mental health struggles were genetic.  In the language of the day, George Henry Dessa described how his youngest (unnamed) son had died aged 12 ‘an idiot’, while his wife, Ann Elizabeth Dessa née Rogers, had also been a patient at Bhowanipore from 1849 to 1874.  Patient returns show that she was admitted on the recommendation from doctors, suffering from ‘imbecillitis’; in 1850 she is described as being in good physical health with a ‘more cheerful’ mental state.  On discharge, she went to live with her son William, who stated ‘She is harmless, but commits mischief. I keep her under lock and key at night. She would tear curtains etc. She does not know me’.  Ann died age 70 on 12 December 1888 of ‘old age’, and was buried in the cemetery attached to the Roman Catholic Cathedral in Calcutta.  Her husband predeceased her, having died at Howrah in 1881.

We’ll share any further discoveries about the Dessa family on this blog.

In his 1918 mission to Nejd, Philby’s task, as seen by British officialdom, was to gather intelligence on the area and establish a relationship with Ibn Sa’ud on whom the British had little information.  This information could then be used to further British political, economic and strategic interests in the area in the context of the expected demise of the Ottoman Empire.  In 1917-18 the Empire’s writ still held sway precariously in parts of the Arabian peninsula and the Middle East (in 1818 the Ottomans had destroyed Diriyah, the capital of an earlier iteration of the Saudi state). In 1918 a distilled report of the route taken and information gathered by the Najd Mission 1917-1918 including relations between Ibn Sa’ud and Kuwait and other Arabian potentates was compiled and published.

Philby and the repurposing of ‘colonial knowledge’

However, it seems reasonable to say that Philby did not adhere to the career path of a Colonial Office Intelligence Officer that would be most desired by the officials in London: in 1924 he resigned from the Colonial Office.  Through his deep interest in the Arabian Peninsula Philby was to convert to Islam in 1930 becoming Abdullah Philby and settling on an ongoing basis in Ibn Sa’ud’s domains. 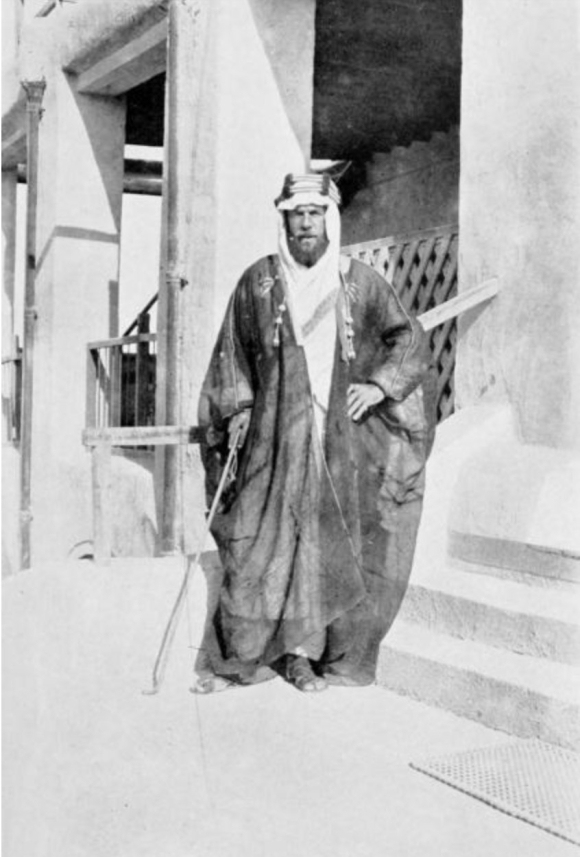 Photograph of Philby used in his book The Heart of Arabia (London Constable and Company Ltd, 1922) Public Domain

He advised Ibn Sa’ud as how to best manage relations with the British and other western powers as well as the international oil companies in Ibn Saud’s negotiations over petroleum rights and concessions.  The outcome of this took a decisive turn in London in 1932 on the eve of the proclamation of the consolidated Kingdom of Saudi Arabia (since 1927 Ibn Saud domains had been known as the Kingdom of Hijaz and Nejd and Dependencies).  In a meeting with Ibn Sa’ud’s son, Prince Faisal and adviser, Fuad Hamza, Sir Oliphant Lanceleot sent them away empty-handed after a plea for financial help to develop the oil reserves of the nascent state.

The legacy of Ibn Sa’ud and Philby

In helping Ibn Sa’ud with insider knowledge and advice to resist, negotiate with and deflect the power of the British Empire, Philby - whilst his role should not be overstated - contributed to the establishment and survival of Saudi Arabia which became a key state in the contemporary Middle East state system and global oil economy.  These developments were to come later but the relationship between Ibn Sa’ud and Philby started and was cemented in ‘Mr Philby’s Mission to Najd’ in 1917-18.

Crossing the Heart of Arabia

In a commemoration of this historical significance, 2023 sees another expedition crossing the heart of the Arabian peninsula retracing the original expedition Harry St John Philby made in 1917-18, both expeditions being made, in a coincidence of timing, around the time of global pandemics.  This contemporary team includes Reem Philby, the granddaughter of Harry St John (Abdullah) Philby.  This expedition will end when the team arrive in Jeddah at the end of the month. Like St John Philby’s original expedition, they have sought to undertake research in order to better understand the vast expanse of territory that makes up this still little known and even less-understood part of the world.  The involvement and influence of the Philby family in desert exploration and wilderness education lives on indeed, in the Heart of Arabia.

Posted by India Office Records at 11:00 AM

In 1917 St John Philby, Colonial Office Intelligence Officer, was sent by the British Colonial Office Arab Bureau in Cairo on a mission to cross the desert from Uqair on the Persian Gulf to Riyadh and make contact with Ibn Sa’ud, the ruler of Najd in central Arabia.

In May 1917, he was briefed en route in Baghdad by Major Gertrude Bell, the first female Military Intelligence Officer in the British Army, who was advising the British government on Middle East policy following her earlier archaeological and intelligence gathering expeditions in Iraq, Syria and the Arabian peninsula. 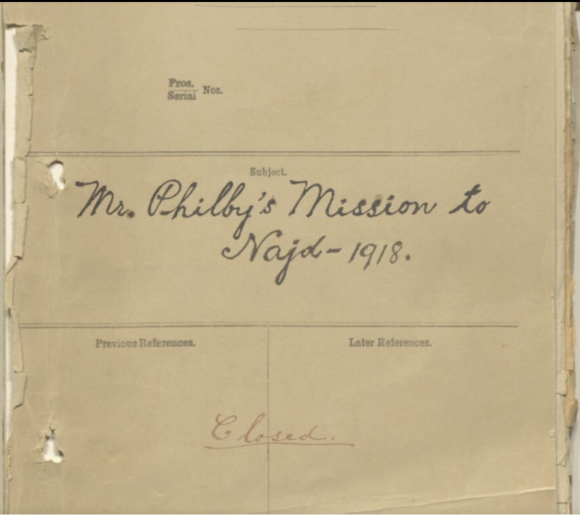 Like any expedition, great attention was paid to logistics including supplies and kit such as tea, tobacco, thermometers and photographic film. 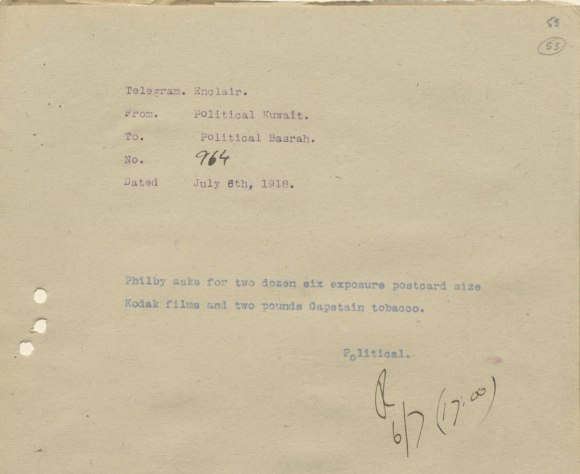 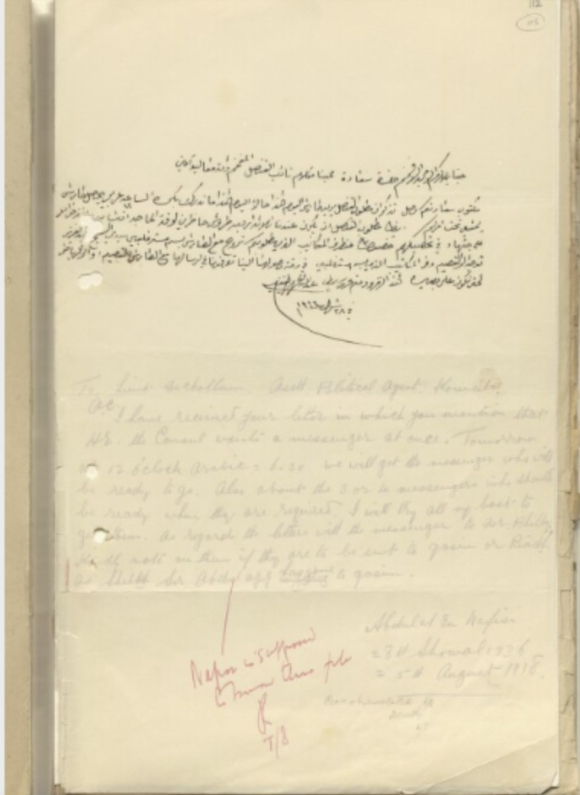 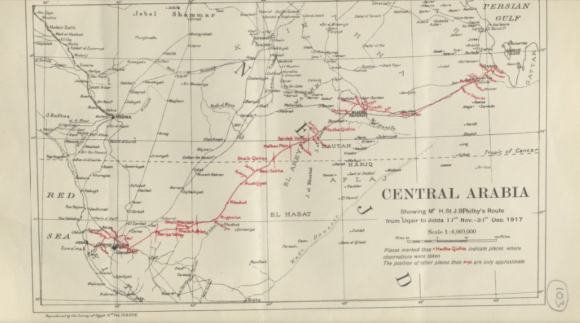 Map of Central Arabia with Philby’s route marked in red

On the route to Riyadh, Philby undertook pioneering cartographical work and meteorological research, recorded information on the people inhabiting the area, and collected geological and natural history specimens.  In contemporary understandings of imperialism and empire, these expeditions constitute the gathering of ‘colonial knowledge’ on an area: the accumulation and collating of a corpus of information on the inhabitants, terrain, and natural resources of an area which will enable the colonial power to influence, coerce, and if circumstances require it, facilitate the deployment of colonial violence to attempt to achieve outcomes advantageous to the imperial power.

As was his habit, Philby compiled detailed and meticulous notes during his preparations and on the journey.  On arrival in Riyadh, he paced the city walls in order to draw up a map of the settlement and its outer limits.  Also important were gifts: Philby brought tents for Ibn Sa’ud and on his departure back to the Persian Gulf was given two Arabian oryx as gifts for King George V which were led on string back over the dusty terrain en route to England via Bombay.

Before his departure back to the Persian Gulf, Philby also took undertook an expedition along the Wadi Dawasir which had been used for centuries as a route to bring the coffee from Mocha into central Arabia.  All this was to be the start of a lifetime of exploration of the Arabian Peninsula. 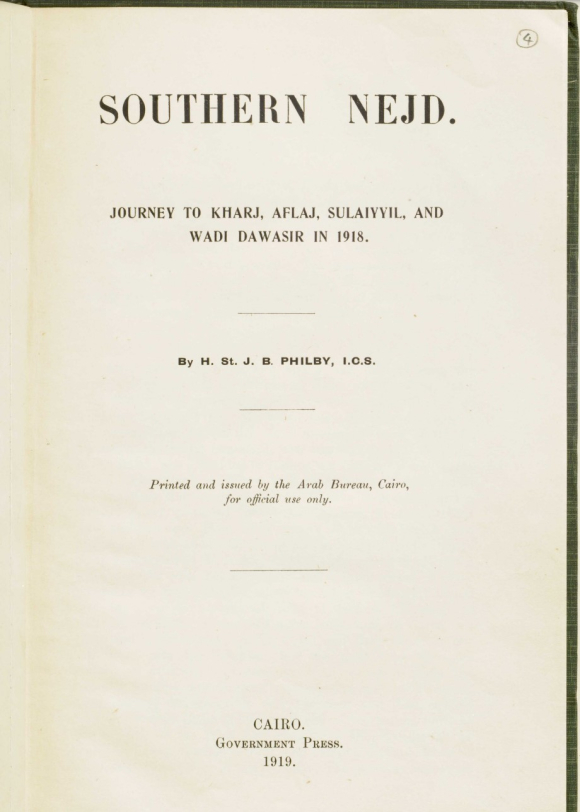