Debts are nothing new, but the ‘most revolting and horrible’ murder perpetrated by Victorian bookbinder James Cook to avoid settling his accounts was an extreme response even by the standards of contemporary ‘Penny Dreadfuls.’  Various British Library sources track the story but the large number of provincial and London newspaper reports of the crime (many digitised on the Nineteenth Century British Library Newspapers website) demonstrate the public’s fascination for this gruesome episode.

Mr John Paas of London, who made decorative bookbinding tools, visited Leicester in late May of 1832 to make deliveries and collect on outstanding invoices, as was customary. According to James Cook’s later testimony, a row arose over payment and Cook struck Mr Paas dead with a binder’s press pin (although Cook initially maintained that he was not guilty of “wilfull murder” since Pass had attacked him first with a hammer). The sensational method used to dispose of the body by dismemberment and burning, the fact that not all the body parts were accounted for, Cook’s abortive flight from justice, suicide attempts and prison conversion inspired leaflets, books and illustrations like the one shown here [The Leicester Chronicle: or, Commercial and Agricultural Advertiser (Leicester, England), Saturday, August 11, 1832; Issue 1142]. 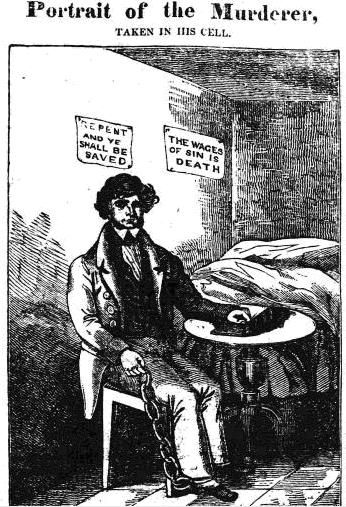 On 10 August, Cook was hanged before a crowd of around 40,000 people having finally confessed that the crime had been premeditated, the temptation being the money he believed Mr Paas to be carrying.  According to witnesses, Cook showed repentance and repeated “Thank God I was detected.” None of Cook’s bindings have been traced but the Library holds an engraved sheet advertising the brass ornaments available for purchase from Paas’s firm.