Welcome to our new blog! We will be sharing stories every day this week. Forthcoming 'Untold Lives' will include missionaries, madams, thieves, African princes, Indian soldiers, and a homicidal bookbinder.

Did you know that the India Office Records are an important source for London working-class history? In the early 19th century, the East India Company employed more than 3,000 labourers in its London warehouses.

Documents survive which tell us who these men were, their age and height, where they lived, and what jobs they had before joining the warehouses. There are pay and pension records. The Company made notes on the labourers’ health, and dates of death are sometimes recorded. Snippets of information which are unlikely to have been recorded anywhere else can be discovered. Where else would you discover that Charles Twort of St George in the East had bad feet and corns?

The warehouse labourers were drawn from widely different backgrounds, with over 350 different former occupations listed in the admissions register. As well as servants and labourers, there are bakers, butchers, booksellers, carpenters, chemists, clerks, coopers, farmers, gardeners, grocers, hairdressers, mathematical instrument makers, sailors, schoolmasters, shoemakers, silversmiths, tailors, and weavers. There is also Sir Richard Corbett, a baronet fallen on hard times. Two black labourers are identified: James Inglis, described as a ‘Negro’, and Richard Lane, ‘a man of Colour’. Most of the men had homes on the north-east and eastern fringes of the City: Shoreditch, Bethnal Green, St George in the East, Stepney, and Mile End. 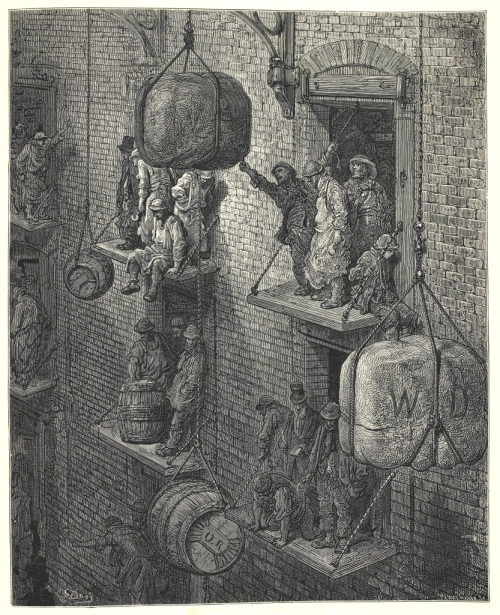 The labourers’ working week was from Monday to Saturday, with a fixed day of six hours at a time when a 10 or 12 hour day was common. Overtime was paid. Many of the men had a second job in the afternoon, sometimes continuing their previous occupation.

Records about the East India Company warehouse labourers are not just of value to genealogists. They could also be exploited by social, political, commercial, and military historians.

The data from the Company warehouse admissions register has been added to the India Office Family History Search.  There are entries for 4,672 permanent labourers and writers (or copyists) entering the Company London warehouses between June 1801 and November 1832. So check to see if you have an ancestor who worked in the warehouses. There may be intriguing stories about your family which have lain hidden in the records for 200 years waiting to be uncovered by you and shared with the readers of this blog!

Absolutely essential reading for anyone interested in the EIC's London warehousemen is the book The East India Company's London Workers: Management of the Warehouse Labourers, 1880-1858 written by Dr Margaret Makepeace (published in 2010 by Boydell in its 'Worlds of the East India Company' series).

This is such an important endeavour and I commend the History and Classics department of the BL and Dr Margaret Makepeace for undertaking this project. It would be great if we could we have a similar anthropology-based blog..?

I look forward to reading this blog. Do keep it going.

This is a fascinating insight to the EIC's London workers.
With such massive warehouses stocked with all manner of desirable goods and thousands of workers, it is not surprising that theft was rife. Many details of goods held, insights into the types and lives of the workers can be found through crimes committed. Putting the search phrase "East India Company" into the Old Bailey Online http://www.oldbaileyonline.org/ search engine generates over 250 hits, the majority concerned with warehouse employees.