I was reminded recently of the story of James Africanus Beale Horton, one of a stellar group of black intellectuals from 19th century West Africa.

Horton, born in Sierra Leone in 1835, qualified as a doctor in Edinburgh in 1859. Joining the British army’s medical corps, he returned to West Africa and worked mainly in what is now Ghana. 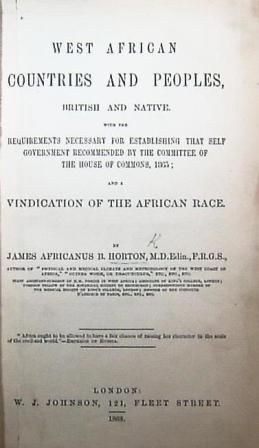 By the time he died, at only forty-eight, Horton was the author of two medical books and several political works. His most celebrated book is West African Countries and Peoples (1867), in which – well ahead of his time – he argued for the independence of the British West African colonies and Liberia. His ideas prefigured the African nationalism of the 20th century. It took until 1957 for Ghana to gain independence – the first British colony in Africa to do so.

He was ahead of the curve, too, in arguing for the creation of a West African university, and for medical training for Africans in the region. And, drawing on his medical experience, he published a clear, forthright and scientifically based rebuttal to new ideas of ‘scientific racism’ which, at the time, were becoming increasingly influential.

In some respects Horton’s ideas may seem rather conservative and elitist today, but in his time he was radical – not least in his resounding declaration of equality between black and white. ‘I claim the existence’, he wrote in West African Countries and Peoples, ‘…of a common humanity in the African or negro race; that there exist no radical distinctions between him and his more civilised confrère [brother]’. It’s appropriate to remember him in this year’s Black History Month.

Posted by Margaret.Makepeace at 07:00:00 in Black & Asian Britain , Politics , Reform

This is a fantastic revelation! Great from the British Library!