Sir Hans Sloane knew everybody who was anybody in early eighteenth-century London.  His position as Secretary and later President of the Royal Society put him right at the heart of the scientific establishment and brought him into contact with all the most distinguished men of his day, from Isaac Newton to Samuel Pepys.  But his correspondence contains letters from a host of humbler people as well: sailors offering to sell him an interesting shell or other curiosity that they had picked up on their foreign travels, amateur mathematicians trying to interest him in their latest attempt to solve the longitude problem, Grub Street hacks promising to dedicate their latest poem to him, and a whole host of other crooks, chancers, eccentrics and madmen.

This desperate plea from a prisoner in the ‘Condemned hole’ at Newgate is a reminder, if we needed it, that Sloane’s London was not just the London of Newton and the Royal Society, but also the London of Hogarth and the Tyburn Tree:

Honrd. Sr
I am yt poor unfortunate, who serv’d yr Brother, and to my great griefe being Seduced by ill company lead me into this trouble, tis ye first time I ever was in trouble, and I humbly beg for Gods sake to spake one word to my Lrd Sunderland about me; Doctr Amyand has spoke to my Lrd likewise and if yr Goodnes would be pleased to back it, it would save my life, ye person concerned in ye same fact with me is reprievd he having friends to spake for him, Sr after tomorrow is day of execution, and for Godsake assist him, who is in great affliction
Alexander Murray 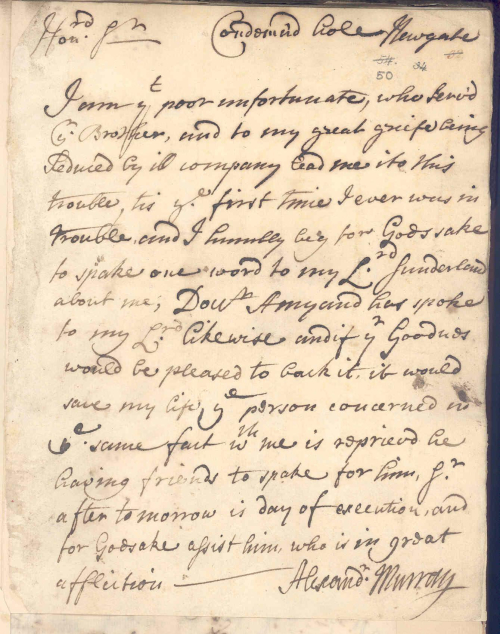 The excellent Old Bailey Online website provides some background on Murray’s case.  On 30 July 1715 he went into a shop in Blackfriars and asked for a length of blue camlet (a clothing fabric made of a mixture of wool and silk), which he asked the shop assistant to bring with him to a nearby alehouse.  When they reached the alehouse, the assistant was sent back to the shop on a pretext, and Murray and his accomplice Robert Mullins ran off with the goods.  They took a boat up the Thames to Horseferry (modern-day Lambeth Bridge) and were eventually arrested in the White Hart inn, where Murray was found hiding in a closet, with the fabric stowed under the bed.  Murray’s feeble defence was that ‘he thought the Goods were paid for’, but he and Mullins were both found guilty and sentenced to death.

Sloane was a kind-hearted man, and it would be nice to think that he took pity on Murray and wrote to Lord Sunderland asking for a reprieve.  But if he did, it failed to save Murray’s life.  The Newgate prison chaplain Paul Lorrain (another of Sloane’s correspondents, as it happens, and a former secretary and translator to Samuel Pepys) recorded the details of Murray’s final confession: he was 24 years old, had worked as an accounting clerk for his uncle in Ireland, then served several years with the army in Flanders, but ‘having afterwards kept bad Company, and being brought to Poverty, he was induc'd to this Fact, which he said was his first’.  On 21 September 1715 he was hanged at Tyburn in the company of four other prisoners, including the female thief Mary Nichols (aka ‘Trolly Lolly’), their bodies probably destined for the anatomy theatre at Barber-Surgeons Hall.  In the age of the Bloody Code, when more than fifty executions took place in London every year, it was just an ordinary day.