Jean de Wavrin, writer of one of the great medieval chronicles of England

In the early 15th century the powerful Duchy of Burgundy with its huge territories in the Southern Netherlands, was a political and cultural rival to France. Into the magnificent Burgundian court circle, Jean de Wavrin was born in around 1398, bastard son of Robert, Count of Wavrin, who is believed to be the ancestor of King Juan Carlos of Spain and HRH the Prince of Wales.

Jean made his military debut as a young squire at the battle of Agincourt. He took part in numerous military expeditions for the Burgundians, and their English allies until 1435, when he married a wealthy widow from Lille, and was legitimised by the Duke of Burgundy. As Lord of Le Forestel, he performed numerous official duties for successive dukes, including embassies to the Pope and the English court. 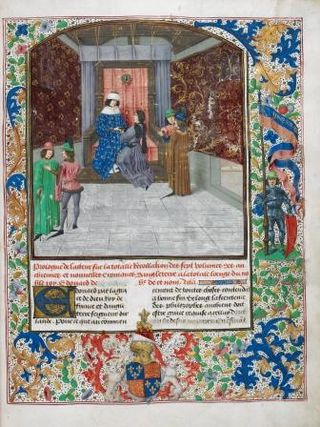 Image no: G70026-79  Discover more images from the Bl collections

In the last twenty-five years of his life Wavrin compiled his multi-volume chronicle of England from its legendary beginnings to 1471. Though his stated purpose was to please his nephew and to avoid idleness, his true motives will never be entirely clear. Wavrin was certainly an anglophile and probably met John of Lancaster, Anthony Woodville, brother-in-law of Edward IV and maybe the king himself during his temporary exile in Flanders. The later volumes provide a unique view from Europe of the Wars of the Roses, based on his personal knowledge of the events as they took place and on information he obtained from those involved on both sides. Edward IV owned a magnificent copy of the chronicle and two luxurious manuscripts to be displayed in the British Library’s Royal Manuscripts exhibition are part of his set.  The first contains a picture of Wavrin presenting his work to the English king.  However Wavrin died at about the age of 75, before the volume was completed in c.1475.

Posted by Margaret.Makepeace at 07:00:00 in Arts and crafts , Journeys , Politics , War