Tales from the other Shakespears

Among the generous benefactors to India Office Private Papers is the late Dr Omar Pound (1926-2010), teacher, writer and translator of Persian and Arabic literature, only son of the celebrated American poet Ezra Pound and his English wife, artist Dorothy Shakespear. Ezra and Dorothy met at the salon of her mother Olivia Shakespear (1863-1938) who was a life-long friend and one-time lover of W.B.Yeats.   Olivia was a novelist and playwright in her own right and an influential patron of the arts. Her Kensington salon was frequented by writers and artists including Pound, T.S. Eliot, and James Joyce.

The Shakespear family is related to a number of other illustrious figures in English literary and military history in British India, including William Makepeace Thackeray, General Sir John Low, and Colonel Sir Richmond Campbell Shakespear.  In order to avoid confusion with William Shakespeare, the Shakespears of British India dropped the ‘e’ at the end of their name. There is, however, a distinct possibility that their earliest traceable ancestor John Shakespear of Shadwell could well be from the same stock as the great poet of Stratford.

In 2001, Dr Omar Pound presented to the Library the diary (IOPP/Mss Eur A230) of his grand-uncle, Captain William Irvine Henry Shakespear (1878-1915). Captain Shakespear was an explorer and a political officer who travelled extensively in the Middle East, a talented linguist conversant in Urdu, Pashto, Persian and Arabic.  He was killed in action in Central Arabia during World War One.  Captain Shakespear made seven journeys through Arabia between 1909 and 1914. The diary is a record of his seventh expedition, a 1,800 mile journey across mostly uncharted territory from Kuwait to Suez via Riyadh in 1914.   We learn of the frequent struggles and negotiations he had with the members of his caravan as well as his dealings with local tribal leaders and raiders.  On 23 March 1914, he records the discovery of twenty thieves surrounding their camp and he reflects that the early discovery of the bandits prevented a wholesale looting and possible murder of his whole team.  An additional feature is an eight page vocabulary of tribal sign language concerning parts of the body.  This diary appears to be the only primary source recording this remarkable journey apart from an article by Douglas Carruthers in the Geographical Journal of May/June 1922. 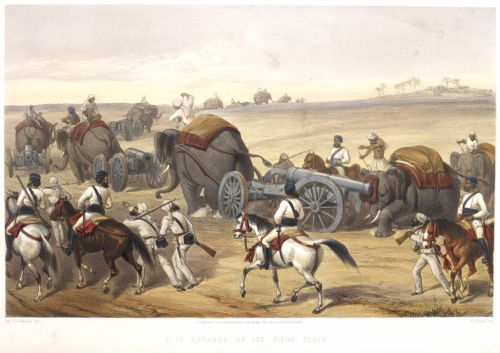 When Dr Omar Pound died in March 2010, he bequeathed to the Library an important collection of personal letters (IOPP/ Mss Eur F631) from his maternal great grandfather, Alexander Shakespear (1822-1881). During the Indian Uprising 1857-58, Shakespear was a Magistrate and Revenue Collector at Bijnaur and Civil Auditor of the North-West Provinces.  He wrote almost daily letters to his wife Catherine (‘Kate’).  She had just given birth to their second child and was evacuated from Bijnaur to another town, whilst Alexander stayed in Meerut to protect the property of the headquarters of British administration.  These 83 original letters are records of his personal experience of handling the chaotic situation after the outbreak of violence at Meerut on 10 May 1857.  The letters offer a glimpse of the life style of the British in India, as well as British attitudes towards the local people during the Indian Uprising. Of particular interest are the descriptions of his ambiguous relationship with the Nawab and the different approaches adopted by the British in their dealings with Hindu and Muslim communities.

The death of a political agent - Captain Shakespear

Search for more books and documents about the themes in this story.

Posted by Margaret.Makepeace at 07:00:00 in Conflict , Journeys