In my previous blog about Austrians and Germans repatriated from India during the First World War, I mentioned that some women had an ‘unfortunate’ profession. 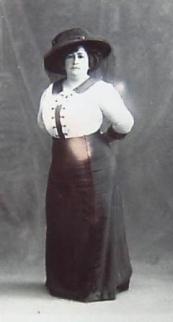 There were six women from Calcutta with an ‘unfortunate’ profession, eleven  from Bombay described more bluntly as prostitutes, five female brothel-keepers, and two servants in a brothel. This was the first time we had seen a reference to European prostitutes in India – documents in the India Office Records focus mainly on local women and the health problems in the Indian Army.

However, Our Army in India and Regulation of Vice refers to the ‘White Slave Traffic which has provoked the indignation of the Western World, which exists also in the East’. Calcutta Vice, a tract against prostitution, refers to the longstanding import of girls from Germany and Eastern Europe. According to Philippa Levine in Venereal Disease, Prostitution, and the Politics of Empire: the Case of British India, British authorities were relieved to find that most white prostitutes were not from Britain, and therefore not such a challenge to social norms and the delicate balance of imperial power as they had feared.

The presence of European women in brothels in India raises all sorts of questions. Were they trafficked? Did they go to India expecting an entirely different life? Did they go there with the intention of pursuing this occupation? What were their circumstances in Germany and Austria? Were they born in India?

How did these women get on with their fellow passengers to Europe, the missionaries, nurses, clergymen’s wives and other pillars of society?

Interesting! I came across this issue when I was doing research on my Masters dissertation on Race in India under the Raj. It would also be interesting to know how they fared with the Anglo-Indian community as I assume they must have been having some mixed race children, being prostitutes and not therefore being very selective about whom they slept with- well as long as the man in question had a reasonably large purse!