On Remembrance Sunday, we are sharing a story about librarians who lost their lives serving in the First World War.

In 1923 The Library Association commissioned the calligraphers Edward Johnston and H Lawrence Christie to design a roll of honour commemorating the British librarians who fell in the Great War.  Johnston, a renowned calligrapher best-known for designing an alphabet used on London Underground signs until 1980, was familiar with the British Museum Library having studied its manuscript collections as a young man.  Christie was one of the co-founders of the Society of Scribes & Illuminators and had already designed other memorials to the 1914-1918 war, including the bronze panel in the House of Commons commemorating the five Committee Clerks who were killed in action. 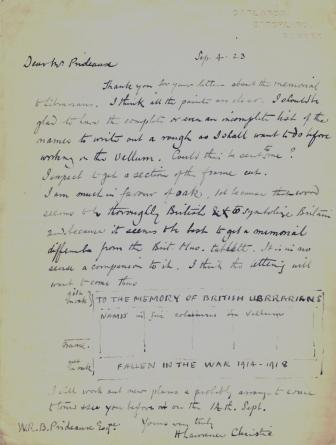 Letter from H Lawrence Christie to W R B Prideaux, Secretary of the Library Association, showing the 1923 design for the roll of honour

The original design was for a roll of honour on a series of vellum panels behind glass and framed in oak, to be written and gilded by Edward Johnston and H Lawrence Christie, and framed at the Hampshire House Workshops in English Oak.  The Library Association contacted libraries across the United Kingdom asking for information about staff killed during the First World War.  When the replies came in it soon became clear that there were too many names to be easily accommodated by the original design.  Following the advice of Christie, it was decided that the entire memorial would be made of a series of wood panels incised in gilt.  English oak was chosen because, in the words of Christie “the wood seems to be thoroughly British and to symbolise Britain”.  The memorial was made by the workshops of Harry Hems and Sons of Exeter, ecclesiastical sculptor and wood carver.

The memorial, which was erected in the corridor leading to the Round Reading Room of the British Museum, was officially unveiled at a ceremony in Museum on the evening of Friday 24th October 1924.  The memorial remained at the British Museum until 1998 when it was moved to its current site in the British Library. What is less well-known is that the Library Association also collected service details for each of the librarians named on the memorial.  Many of the forms returned included photographs, which are now held in the British Library Corporate Archive.  A selection of these has been made available on the BL Facebook pages.  More will be added during the coming week.

Unfortunately, we have very little information about the memorial or the librarians mentioned on it, and only have images for 30 of the 142 people named.  Please help us to tell the stories behind these ‘untold lives’ by using this blog or our Facebook gallery pages to share any information you have about the memorial or the librarians named on it.

Here is some more information about Stanley Edward Hall (1895-1916), son of John and Eliza Hall of Millom Cumberland. Arrived in France 22 August 1914; taken prisoner 28 August 1914 after being wounded in fighting near Le Cateau. Part of an exchange of prisoners with Germany in February 1916. In hospital in England before being taken home to Millom where he died on 23 March 1916. Buried 27 March in an unmarked grave at Holy Trinity Church Millom. A headstone for Stanley Edward Hall was erected in the churchyard in 2010 with the help of the Commonwealth Graves Commission: see the Hexham Courant July 2010 http://www.hexhamcourant.co.uk/hero-gets-his-headstone-after-94-years-1.735250?referrerPath=2.5534

Here are some more details for Frank Wootton Eastlake. Born Camberwell 6 February 1891, son of Richard Algernon and Caroline Mary (née Britton). Educated Lyndhurst Grove School. Enlisted September 1914 in 21st (County of London) Battalion (1st Surrey Rifles). Killed in action at Vimy Ridge 23 May 1916. Described by his C.O. as a lad who knew no fear (De Ruvigny, Roll of Honour vol. 2, p.110). Awarded D.C.M. for conspicuous gallantry - he remained in an exposed position on the parapet of a captured enemy trench and threw bombs for over 6 hours, helping to prevent a counter-attack (citation 11 March 1916).

Posted by Margaret.Makepeace at 11:00 AM