On Boxing Day afternoon in 1855 Thomas William John Corrigan finished work as foreman at the East India Company’s warehouse in Leadenhall Street, purchased a knife, and returned to the house of friends in the Minories where he and his wife Louisa were spending Christmas.  Without warning, he stabbed Louisa in the chest and she died shortly afterwards. Corrigan was immediately wracked with remorse and all who knew him said the attack was completely out of character.

The murder caused a sensation and his Old Bailey trial in February 1856 was widely reported in the British press.  Corrigan was 29 years old, a quiet and gentle man, and he and Louisa had four young daughters. The court heard how Corrigan had spent the previous day drinking and how he had become increasingly addicted to alcohol during the past few years. His defence was based on evidence that he suffered from delirium tremens and could not be held responsible for his actions as he was in the grip of temporary insanity when he stabbed Louisa. However Corrigan was found guilty of murder and sentenced to be hanged. Petitions and letters about the case and the verdict were sent from all over the country to Sir George Grey the Home Secretary.  One petition asking for the death sentence to be lifted was signed by members of Louisa’s family, and the jury who heard the case also submitted a memorial in favour of leniency.

Two days before the execution was scheduled to take place at Newgate, Grey changed Corrigan’s sentence to life imprisonment. However the producers of sensational souvenirs had already been busy and the British Library has two copies of a broadsheet which purports to quote Corrigan’s anguished last words from the scaffold. 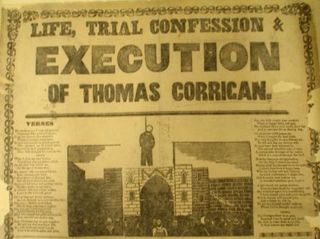 'When I slew my dear Louisa,
Wandering was my jealous mind,
On the fatal tree behold me,
At the age of twenty-nine.'

From BL:74/1888.c.3 A collection of broadsides and newspaper cuttings on murders

Corrigan was transported to Western Australia and his daughters were cared for by the Foresters Society.  Corrigan wrote a book of poetry Fugitive Pieces which was sold to raise money towards their upkeep at a London orphanage. His conduct was exemplary throughout his imprisonment and he was freed on a ticket of leave in May 1861. He remarried and had a second family.  Corrigan was joined in Australia by his younger brother Peter and three of his daughters by Louisa.

Corrigan died in October 1905 after a building a successful career as a journalist and newspaper editor, a life that he could only have dreamed of before the tragic events of Boxing Day 1855.