The recent financial crisis has seen the collapse of many businesses, but similar tragedies are very common in history.  In 18th century London, neither the Poor Laws nor the parish workhouses were of any use to failing bookbinder Richard Smith who found himself confined for debt in the King’s Bench in 1732 together with his wife, Bridget, and their two year old child.

The binder “had been always industrious and frugal, invincibly honest, and remarkable for conjugal affection” but had been afflicted by what he described as “a train of unlucky accidents”. Unable to escape their situation, the husband and wife committed suicide after having killed their daughter to prevent her from remaining “friendless in the world, exposed to ignorance and misery”.  The letters they left behind can be read in the Library’s copy of The Gentleman's magazine (Volume 2 p.722).  A later article in the Library’s copy of Morning Chronicle and London Advertiser  (Tuesday, September 21, 1779; Issue 3226) also covered the event (see the Burney Collection Database).

The Smiths were confident that God would take care of their “unbodied natures”, resigning themselves to him “without any terrible apprehensions”,  and left letters addressed to their landlord and to their cousin (the successful bookbinder John Brindley) which give a heart- rending description of their sufferings.  The contents show Smith to have been a sympathetic man who was careful to apologise for causing trouble to his friends, and who was sincerely sorry to have wronged Mr Brooks his creditor. He had settled his rent and was even concerned for the future of his pets “if you can find any Chap for my dog and antient cat, that would be kind”.

The impact of the suicide on contemporary society was wide ranging, and was discussed by Voltaire, Oliver Goldsmith and Tobias Smollett, all of whom admired Smith’s calm and rational explanation of his plight.  The story even found its way across the Atlantic via The Rhode Island Gazette (1732 BL microfilm M.misc.686) where it inspired an anonymous pamphlet An Appeal for the Georgia Colony (1732) which questioned the sense of sending debtors to gaol - thus effectively preventing them from paying their debts at all - and suggesting that a transfer to the colonies might be more useful. 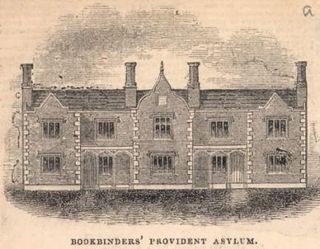 This painful episode may have had a positive outcome. A newspaper cutting of the story is to be found in a scrap book, part of a Library collection compiled by the Victorian bookbinder, John Jaffray, who cannot fail to have been affected by it (see more on the Jaffray Collection).  Jaffray worked tirelessly for the well-being of his fellow craftsmen and to ensure that nothing like this could happen again he promoted the establishment of unions, pension societies and charitable establishments such as the Bookbinders’ Provident Asylum shown in this illustration from the Jaffray Collection.

Posted by Margaret.Makepeace at 07:00:00 in Arts and crafts , Domestic life , Work