It is well known that, alongside its trade in goods, the East India Company used its ships to transport large numbers of people around the world: merchants, administrators, soldiers, sailors, adventurers, women, children, convicts, and so on.   Less well known is that the Company also played a small but significant part in the slave trade.  In the mid-seventeenth century attempts were made to establish a plantation colony in Madagascar, but over a much longer period the slave populations of St Helena and Fort Marlborough (Bengkulu) were replenished with West African slaves.  Indeed in 1718 the population of St Helena consisted of 542 whites and 411 slaves.

The last dedicated slaving voyage organised by the Company appears to have been that of the Royal George, commanded by Nicholas Skottowe, in 1764-6.  Skottowe was ordered by the directors to procure slaves at Cabinda in Angola and then sail on to St Helena and Bengkulu before heading to Bombay.   He was given a consignment of commodities to exchange for slaves, including guns, gunpowder, cutlasses, and piece goods. 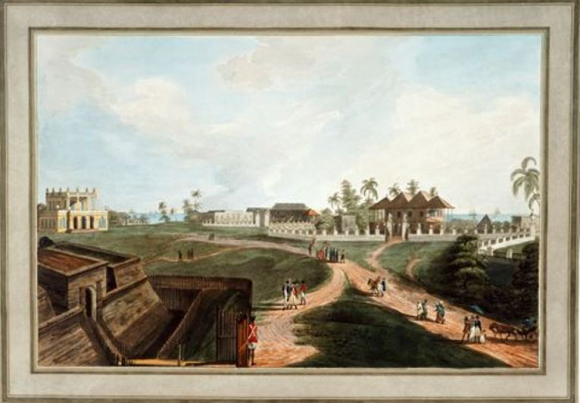 The Royal George was moored off Cabinda between 26 February and 29 April 1765 while 236 slaves were purchased: 125 men, 45 women, 38 boys, 25 girls, and 3 'children'.  The ship then sailed to St Helena (it was surely no coincidence that Skottowe's brother John was Governor of the island), where in late May the slaves were sent ashore and 'refreshed'.  Skottowe was paid a commission of 15 shillings for every slave (£177 in total) and his Chief Mate was paid 5 shillings per slave (£59 in total). 150 of the slaves were sent on from St Helena to Bengkulu. 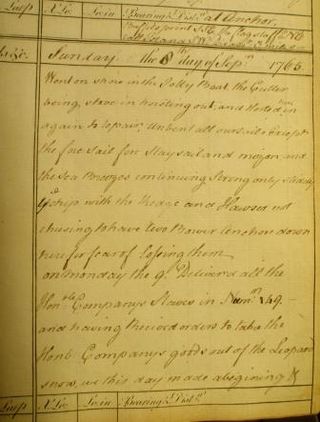 The official journal of Royal George reveals very little about the slaves and the conditions they experienced. We know that all 236 slaves purchased at Cabinda were delivered to St Helena, and 149 of the 150 sent on to Bengkulu were landed at Fort Marlborough in early September: 60 men, 31 women, 31 boys and 27 girls.  This survival rate is very surprising, because Royal George was not a happy or healthy ship.  Of the 77 members of the crew, 21 died during the voyage, 10 were discharged, and 2 were recorded as having 'run' from the ship.  These losses were unusually high for a Company ship.

Further research will reveal what happened to the slaves. Skottowe went on to command the ship Bridgewater before becoming a Principal Managing Owner of some of the East Indiamen hired by the Company.  He died in 1792 aged 67 and is buried at Chesham in Buckinghamshire.

Skottowe’s voyage may only be a small footnote in the broader commercial history of the East India Company, but it opens up a window on a little known and very dark world, exposing as it does the part played by the Company in the transoceanic slave trade.

Posted by Margaret.Makepeace at 07:00:00 in Commerce , Journeys , Slavery

Fascinating and informative but do allow me to say that I've followed the Skottowes and I can tell you the correct date of his death. He died at Bath after going there for the spring of 1798 and died there in Dec. He was brought to Chesham and buried in Jan'y 1799 in the vault which is where his brother John governor of St Helena is buried. However Grace his wife died in 1792 aged 67 and she and Nicholas have a memorial in the chancel of St Mary's Chesham. I hope this helps.