On 7 February 1864 Charles Dickens should have been celebrating his 52nd birthday.  However on that day he received the tragic news that his son Walter had died in Calcutta on New Year’s Eve at the age of only 22. 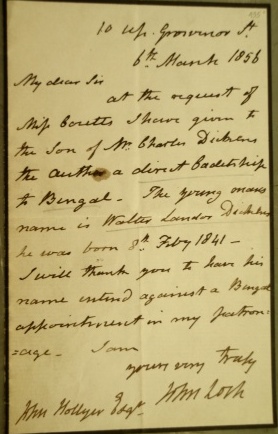 Walter Landor Dickens had been serving as a military officer in India after being granted a cadetship in the East India Company’s Bengal Army in 1857.  Cadets had to secure nomination by a Company director.  Each director had a limited number of civil and military nominations in his gift each year and patronage networks often determined who should receive favour. In Walter’s case, Angela Burdett Coutts used her influence with director John Loch.

Nomination was just the first step in being appointed an officer in the Company armies.  Direct entry cadets such as Walter who had not attended the Company’s Military Seminary at Addiscombe had to pass a number of tests which had been introduced in June 1851:

• Write English correctly from dictation.
• Have a ‘competent knowledge’ of the rules of arithmetic.
• Be able to translate passages from Latin into English.
• Be able to parse and show a knowledge of grammar and syntax.
• Pass a translation test from French to English, or from Hindustani to English.
• Pass an exam on the history of Greece, Rome, England, and British India.
• Know the modern divisions of the world, the principal nations of Europe and Asia, the names of European capitals and of the chief cities of India, and of the main rivers and mountains of the world.
• Have an elementary knowledge of fortification and some instruction in drawing.
• Submit a declaration of being a confirmed member of the Church of England, otherwise a certificate from a minister to prove they had been well instructed in the principles of religion in which they were raised.
• Produce testimonials of good moral conduct from their place of education.

The education Walter had received from Rev John Brackenbury at Wimbledon equipped him to succeed in these tests which were administered by professors from Addiscombe.  He was also given a medical and was certified as being free from ‘any mental or bodily defect whatever’. Unfortunately Walter’s health failed in India and he was on his way back to England on sick leave when he died.  His burial certificate in the India Office Records gives the cause of death as hematemesis (vomiting of blood).  He was interred on 1 January 1864 in the military burial ground at Fort William Calcutta. The childhood nickname of ‘Young Skull’ given to him by his father sadly proved to be all too appropriate.

Search Our Catalogues Archives and Manuscripts

Posted by Margaret.Makepeace at 07:00:00 in Arts and crafts , Health , Journeys

I have seen the grave of Lt. Walter Landor Dickens in a corner of South Park Cemetery, Calcutta. The caretaker told me it was that of Dickens' grandson. The writing is illegible.