A recent enquiry about the papers of Yvonne FitzRoy [IOPP/ Mss Eur E312] led to the discovery of the letters of Victor Sassoon – a legendary figure in 1930s Shanghai.

Yvonne FitzRoy (1891-1971), was a society lady with a progressive mind.  She was a theatre actress before the First World War.  But her acting career was cut short when she was summoned by the Scottish Women’s Hospital (supported by the National Union of Scottish Women’s Suffrage Societies) to serve as a volunteer nurse in Romania and Russia.  She was awarded a Russian medal at the end of the War, and continued her adventures in India where she worked as the private secretary for the wife of the Viceroy from 1920 to 1926.  It was probably during this time that she became acquainted with Sir Victor Sassoon, a member of the Indian Legislative Council. 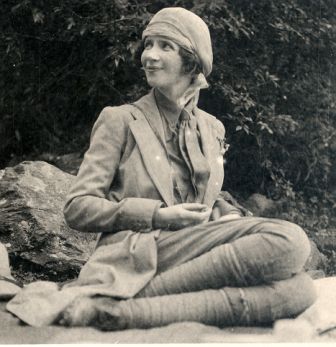 Victor Sassoon came to know Yvonne better through his connections with the English aristocracy.  In the early 1920s Sassoon purchased a stately home, West Green House in Hampshire but he never had much chance to enjoy the life of an English country gentleman while looking after his business interests in Bombay and Shanghai.  He allowed the previous owner of the property, Lady Evelyn, Duchess of Wellington, to stay in the manor house with her friend Yvonne FitzRoy. 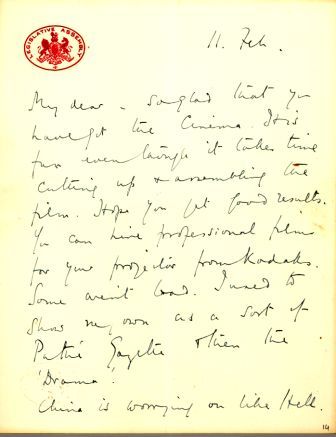 Yvonne’s unusual friendship with Sassoon lasted many years whilst she stayed in his country property.  Letters from Sassoon to Yvonne were all signed as “Daddy”, “Dad”, or “D.”    At first glance I was misled to think that these letters might have been from Yvonne’s father, Sir Almeric FitzRoy, the Royal Clerk of the Privy Council (1898-1923).   However after careful examination of Sir Almeric’s handwriting in other letters in this collection, I reassured myself that these were indeed written by Sassoon.

Sassoon, reputed to be a bon vivant with impeccable manners, charmed many young ladies in his busy life.  However, he was never serious about his relationships with women until very late in his life.   This is partly due to his sensitivity about his leg injury caused by an air accident when he was a RAF officer during the First World War.  Curious whether Yvonne was one of his many affairs of the heart, I read all the letters trying to detect any suggestions of romance.   Judging by the contents of the letters, the level of intimacy between these two friends did not develop. Sassoon wrote mostly about the Indian economic situation or political situation in China.

Their correspondence seems suddenly to come to a halt in 1939 probably as a result of the death of Lady Evelyn.  Yvonne seems to have suffered some trauma around that time.  Sassoon was struggling to maintain his business empire in Shanghai during WWII and eventually retired to the Bahamas in 1948.  With no prospect of ever returning to England, he decided to leave his country house to the National Trust in 1957.  Sassoon eventually married one of his nurses in his 70s and died childless in Nassau in 1961.  Yvonne stayed on in West Green House alone, never marrying, until her own death in 1971.

Posted by Margaret.Makepeace at 07:00:00 in Commerce , Journeys , Politics