Here is a story which could become a blockbuster if put on screen! A fascinating account of escapes from Soviet Russia during World War II has lain buried in the files of the India Office Records. Four Poles, one Ukrainian and a Russian woman give their statements, full of discrepancies. 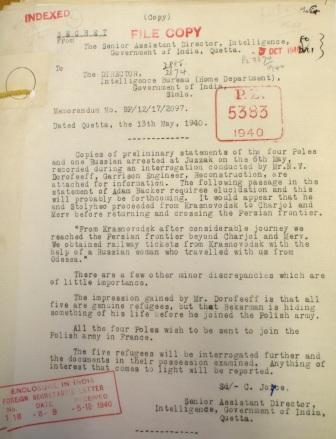 Olgierd Stołyhwo and Adam Backer were at school together and fought in the Polish Army after the German invasion in 1939. Taken prisoner, they escaped hoping to join the newly formed Polish Army in France. Their chosen route through Hungary was blocked, so they made their way eastwards. They were employed as helmsmen on the M.S. “Armenia” and M.S. “Gruzja“, plying between Odessa and Batum.

They met Tatiana Czynnowa, who left the Black Sea coast with them having fallen madly in love with Olgierd. She helped the men, buying train tickets or food and trading their possessions without raising suspicion. The trio travelled from Odessa to Moscow, then on to Krasnoyarsk in Siberia. When their plans of crossing the Chinese border fell through, they went via Novosibirsk and Tashkent to Ashabad on the Persian border where they gave themselves up to the Iranian authorities. Olgierd and Adam became separated from Tatiana, who quickly fell in love with an official!

The Iranians also held three other men escaping from Russia. Jozef Bakermann, a Polish Jew, and Bronislaw Boguszewicz, a Lithuanian with Polish connections, were travelling together. The third man was Iwan Bazylewski, a Ukrainian peasant. All five men were conveyed towards the border with British India and left with directions. The group crossed over and were captured at Juzzak on 6 May 1940.

Tatiana had also become a refugee in India and the British authorities wrote to Mozzafar A’lam, Iranian Foreign Minister, threatening to send the girl back. Tatiana possessed ‘a Lux advertisement on the back of which a series of dots and dashes were written’ and a postcard to her Iranian boyfriend starting with “Greetings from England…”. She explained the dots and dashes were a fortune telling game, not a cipher!

The men were lodged in the dak bungalow in Quetta and a month later Tatiana joined them. The group caught the attention of the local press. Polish Consul Eugene Banasinski accused the British of mistreating the citizens of an allied country. Mrs Vernon-Smith, the American wife of the officer stationed in Baluchistan, could speak a little Polish having been employed as a transport driver for the Red Cross in Poland in 1939. She confirmed rumours that Jozef Bakermann was a German Jew. The local authorities, terrified of espionage, immediately locked him up. The Poles staged a short hunger strike as a protest against ‘being detained in idleness’.

Olgierd Stolyhwo told Mrs Vernon-Smith that he had been in the Polish diplomatic service before the war. In reality he had been expelled from the Marine Academy in Gdynia twice, first for running away and secondly for propagating communism. When confronted by the Consul he denied it all.

The whole group was sent under guard by train to be interrogated by Consul Banasinski. He promised to report back but that is where the story ends in file IOR/L/PS/12/380A. However I have managed to trace the rest of the story in IOR/L/PS/12/318, unhelpfully entitled ‘Polish volunteers’….

Part 2 will appear later this week