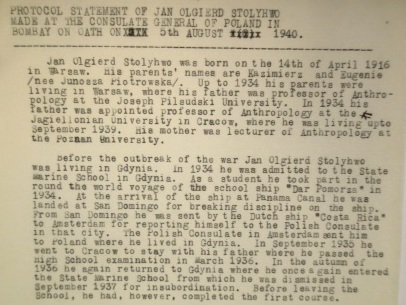 After detailed interviews in August 1940 Banasinski came to the conclusion that
• Stolyhwo and Backer were in the clear
• Bakermann was a Polish Jew after all
• Ukrainian Bazylewski was not a spy
• Boguszewicz was a citizen of Lithuania and should be sent to the Central Internment Camp in Ahmednagar. (In March 1941 Boguszewicz was about to be granted a Polish passport when the Consul discovered that he had been spreading anti-Polish propaganda and complaints about the consular services.)

Tatiana Czynnowa applied to the Government of India for a release in an unusual manner:
‘…From my childhood I have been dreaming of abroad – I imagined a light and happy world and came here, or rather to Iran, yearning for theatres, cinemas, beautiful clothes, restaurants and dances but not in order to be locked up in jail or in a camp. I did not mean to exchange a bad freedom for a good jail…I have already spent 5 long months in prisons and yet for me every month, no every day is precious as the experiences I have to go through are wrinkling my face and I want to live while youth is not completely gone…’
This did not help her and she was placed in the camp at Satara.

Olgierd Stolyhwo went back to Poland to fight the Nazis and according to the Polish Dictionary of National Biography was shot in Warsaw Ghetto in 1943.

Jozef Bakermann was released from prison and was given a Polish passport. He was helped by the Jewish Relief Association. With Stolyhwo and Backer he was allotted a passage to the Middle East in order to join the Polish Legion attached to the British Forces.

The whereabouts of the others remain unknown as yet, but maybe Untold Lives readers can reveal the rest of the story?