To commemorate VE Day on 8 May 1945, we have a story from guest blogger Dr Florian Stadtler -

The contribution made by South Asians living in Britain to the war effort on the Home Front in World War II remains little known. One organisation, run by South Asian and British women, played a particular important function. An entirely voluntary organisation, the Indian Comforts Fund (ICF) worked in close cooperation with the Indian Red Cross and St John’s Ambulance Service.

Founded in 1939 by the Dowager Viscountess Chelmsford, it was a registered war charity approved by the Admiralty, War Office and Air Ministry to provide for the war needs of Indian troops in Europe and lascar seamen, often stranded for long periods of time in Britain as sea routes became increasingly disrupted. During the war years, an estimated 30,000 Indian seamen arrived in British ports annually. The Fund was headquartered at India House Aldwych, where the Indian High Commissioner had made available space as a depot and accommodation for the working parties, including the food parcel packing centre. 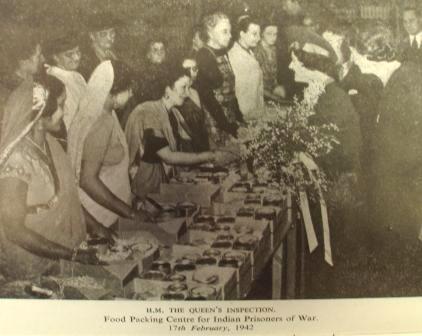 The Fund acted officially as next-of-kin for all Indian prisoners of war and civilian internees in Europe. It coordinated the packing of over 1.6 million food parcels, which were regularly shipped to the International Red Cross in Geneva, from where they would be distributed to the internment camps. The work of the Fund reached its peak in 1943 when the number of Indian internees in Europe had risen to 14,000. The parcels contained special Indian foodstuffs, including dhal, curry powder, ghee, atta and rice. The ICF also sent over 75,400 parcels with warm clothing, which were produced by some 100,000 knitters in the UK who the ICF supplied with wool and whose work it oversaw.

In Britain, the ICF also supported the entertainment of Indian troops and seamen, providing gifts such as gramophone records, books and sporting equipment. The Fund organised weekly leave parties for Indian soldiers to visit London, and introduced a hospital visiting scheme. The Fund’s workload grew exponentially through the war years, until it was wound up at the end of 1945.

Find out more about the Indian Comforts Fund:

Asians in Britain and Making Britain