On 22 June 1897, 19,972 criminal and 102 civil prisoners were released in British India to mark Queen Victoria’s Diamond Jubilee.  Special consideration was shown to prisoners whose offence was attributable to famine and to Burmese convicted during disturbances following the annexation of Upper Burma. 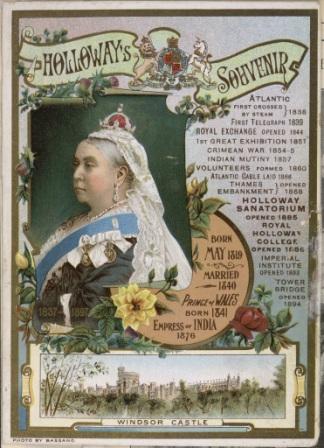 ‘Holloway's souvenir’ from A Collection of pamphlets, cards and verses referring to the Diamond Jubilee of Queen Victoria BL: 1855.f.4.(47a)

© The British Library Board   Images Online

There was a precedent for this ‘act of clemency’. Thousands of prisoners had also been freed when the Queen assumed the title of Empress of India in January 1877 and again on the occasion of her Golden Jubilee in 1887. The Viceroy of India authorised the release of 23,007 criminal and 298 civil prisoners in February 1887, a ‘measure most acceptable to Native Sentiment’. The great majority were serving sentences which would have expired between 16 February and 20 June, the 50th anniversary of Queen Victoria’s accession.  Their conduct in jail had been good and their release was deemed unlikely to give rise to blood feuds or other public disturbances.  All professional and habitual criminals were excluded as well as prisoners with more than one conviction. Releases were made from jails scattered across British India in order to spread the numbers as evenly as possible.

Posted by Margaret.Makepeace at 07:00:00 in Crime , Politics