The India Office Records contain a cache of correspondence from Asian royal families to the British monarchy. From 1760 to 1784 one of the most prolific writers to George III and Queen Charlotte was Muhammad Ali Khan Walajah, the Nawab of Arcot. At this time European and Indian politics became closely intertwined following the development of autonomous regions in India arising from the breakdown of centralised Mughal authority. The French and English backed rival claimants to the Musnud (throne) of Arcot, both hoping to gain control of the Carnatic trade. British victories over the French during the War of the Austrian Succession and the Seven Years War ensured their candidate Muhammad Ali Khan was proclaimed Nawab of Arcot. 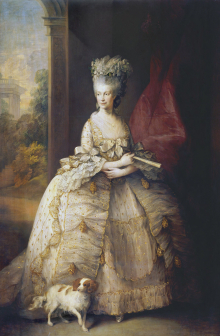 The Nawab’s letters provide insights into his personal thoughts on the continuance of British support and the fate of his successors, and his dislike of certain British officials. Of particular interest is a letter to Queen Charlotte dated 7 October 1771 (BL, IOR/H/104 pp. 649-652). In it the Nawab informs Charlotte about the final hours and death of his beloved wife the Nawab Begum after illness. He recounts the Begum’s thanks for British support to her husband and how she entreated her husband and children to maintain the friendship. The Nawab eloquently describes the sense of loss felt by himself and his children. The Nawab Begum wished to “be personally remembered” by Queen Charlotte and had made the Queen a bequest from her own personal jewels: “a cluster consisting of a brilliant set round with other diamonds, cut & polished after the manner of this country, with a polished emerald drop scallop’d on the surface and the edge”. Could this be a reference to the famous Arcot Diamonds thought to have been given by the Nawab of Arcot to Queen Charlotte in 1777?

Posted by Margaret.Makepeace at 07:00:00 in Commerce , Domestic life , Politics